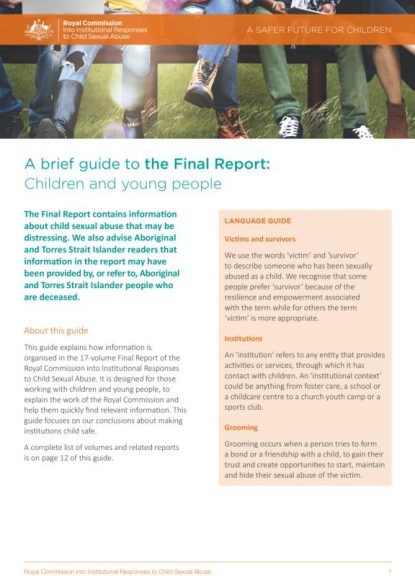 This is the cover of “A brief guide to the Final Report: Children and Young People.” Australia’s Royal Commission Into Institutional Responses to Child Sexual Abuse released its 17-volume final report Dec. 15. (CNS photo/Royal Commission)

Among its 400 recommendations, 20 were aimed specifically at the Catholic Church, whose leaders spent three weeks in February testifying at a “Catholic wrapup.”

Several of the recommendations related to the Australian Catholic Bishops’ Conference working with the Holy See to change the Code of Canon Law “to create a new canon or series of canons specifically relating to child sexual abuse.”

One recommendation was for the Australian bishops to work with the Holy See to determine if the absolute secrecy concerning matters discussed during confession also applies to a child confessing he or she has been abused sexually. The report also said the church should consider if “absolution can and should be withheld” if a person confesses to perpetrating child sexual abuse.

Sydney Archbishop Anthony Fisher and Melbourne Archbishop Denis Hart, conference president, said they did not see the church changing its rules on confession.

Archbishop Fisher, like most of the Australian bishops who testified to the commission, said in a Dec. 15 statement he was “appalled by the sinful and criminal activity of some clergy, religious and lay church workers (and) I’m ashamed of the failure to respond by some church leaders, and … I stand ready to address any systemic issues behind this.”

The Vatican, noting the commission’s “thorough efforts,” said the report “deserves to be studied seriously.”

A Dec. 15 statement reiterated the Vatican’s commitment to “the Catholic Church in Australia — lay faithful, religious and clergy alike — as they listen to and accompany victims and survivors in an effort to bring about healing and justice.”

Several of the commission’s recommendations aimed at improved screening and formation for religious.

The commission also recommended the Vatican retain for at least 45 years documents “relating to canonical criminal cases in matters of morals, where the accused cleric has died or 10 years have elapsed from the condemnatory sentence. In order to allow for delayed disclosure of abuse by victims and to take account of the limitation periods for civil actions for child sexual abuse.”

It said the bishops’ conference “should conduct a national review of the governance and management structures of dioceses and parishes, including in relation to issues of transparency, accountability, consultation and the participation of lay men and women.”

This kind of review was put in place in the United States early this century, in light of its clergy abuse scandal.

“What now needs to be made clear by the (Australian) church leadership is that they take these recommendations and findings seriously and that they are willing to act swiftly in implementing the findings,” said Francis Sullivan, CEO of the church’s Truth, Justice and Healing Council.

“This process will start with the TJHC doing a comprehensive analysis of the report and, in particular, the recommendations that relate either generally or specifically to the Catholic Church. We expect to have this report finalized and provided to the church leadership early in 2018,” he said in a statement.

In February, the Royal Commission said that, since 1980, 7 percent of the nation’s Catholic priests had been accused of child sexual abuse and 4,444 people reported allegations of child abuse to church authorities.

In a 2010 address to a seminar sponsored by the Canon Law Society of America and the U.S. Conference of Catholic Bishops, Mercy Sister Sharon Euart, a canon lawyer, noted that a bishops’ conference “is not a governing body with the power to enact regulations binding its members, except in those matters where universal law (i.e., the Code of Canon Law) requires it.”

She noted that some provisions worked out for the United States eventually were applied worldwide.

PREVIOUS: ‘Enough with the deaths’: Mexican clergy call out crisis

NEXT: Press must be factual, free from manipulation, pope says