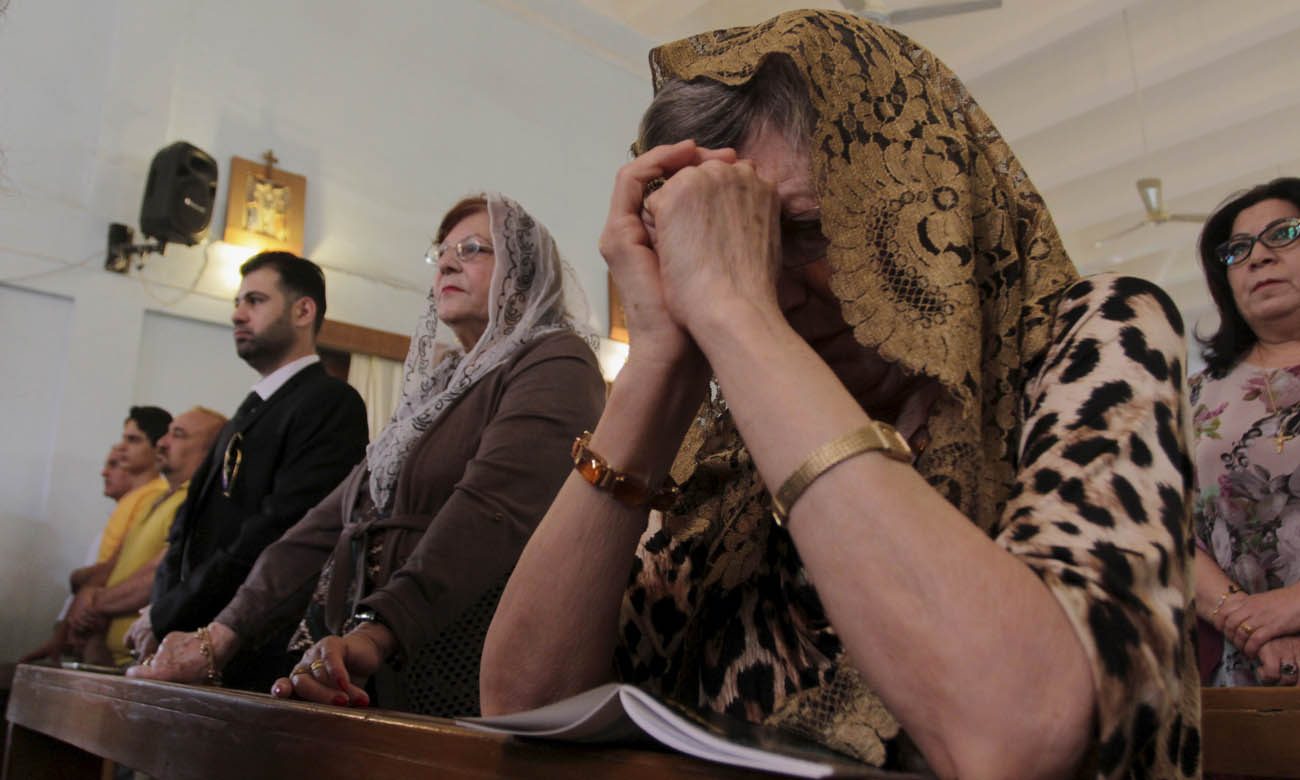 An Iraqi woman prays during Mass in 2015 at a Catholic church in Basra. Archbishop Habib Al Nawfali of Basra warned that the country's Christian community still feels pessimistic about the future, despite the recent announcement by the government that troops have defeated Islamic State. (CNS photo/Essam Al-Sudani, Reuters)

ZAGREB, Croatia (CNS) — A Chaldean Catholic archbishop from southern Iraq has warned that the country’s beleaguered Christian community still feels pessimistic about the future, despite the recent announcement by the government that troops have defeated Islamic State.

Archbishop Habib Al Nawfali of Basra told Catholic News Service: “The daily practice of robberies, gang rapes, torture and murder of Christians is ongoing. Therefore, they are pondering what will be next. We are afraid of another wave of persecution that will be the end of Christians.”

The archbishop, who spoke on the fringes of a meeting on intercultural dialogue sponsored by the European Parliament in early December, said politicians in the West should lobby the Iraqi government to ensure that the Christian minority is protected.

He said that he believed up to 1 million Christians have fled the country since the 2003 U.S. invasion that toppled Saddam Hussein. He described the exodus of Christians from their ancient homeland as a “disaster.”

Basra is home to some 2 million Iraqis, and he said Christians’ experience with the Islamic community is mixed. He said most Muslims in the city are “moderate and they don’t care for religious fanaticism. They treat us Christians equally with dignity and respect.”

However, he said: “There are fanatics who say loudly in the mosques that we are blasphemers, we are the sons of pigs and monkeys. They don’t feel shy in saying that.”

The archbishop said the reasons why Christians remain targets are often complex. “Sometimes it’s about political or economic gain … they find that Christians are higher educated, have properties, or, for example, work as doctors in hospitals or other senior positions, so they attack them to get money.”

He also said Chaldean Catholics, who worship in the Aramaic language that Jesus spoke, “are afraid that this language will disappear in the next generation because our community is now distributed everywhere.” He said there are currently Chaldean communities in 64 countries, and many of them are now worshipping in the local language rather than their mother tongue.

Describing what has happened the Christians in the country as “genocide,” he said the international community should make it a priority to protest the rights of the native people of Iraq, including the Christians.

“We need support politically from Western leaders, and Christian villages need help economically to open workshops to provide employment or for the reconstruction of houses,” the archbishop said.

Asked about preparations for Christmas, the archbishop said that the 400 or so families who remain in his congregation are “people of deep hope and immense faith.” Describing how he has received numerous death threats during his ministry, he said, “I trust in God, the Chaldean people continue to trust in God — our faith is deeply rooted, we have been here for almost 2,000 years. That’s a long time.

“We have only the Spirit of Jesus with us. We have a strong faith; people lose everything but they stay Christian, thank God for that,” he said.