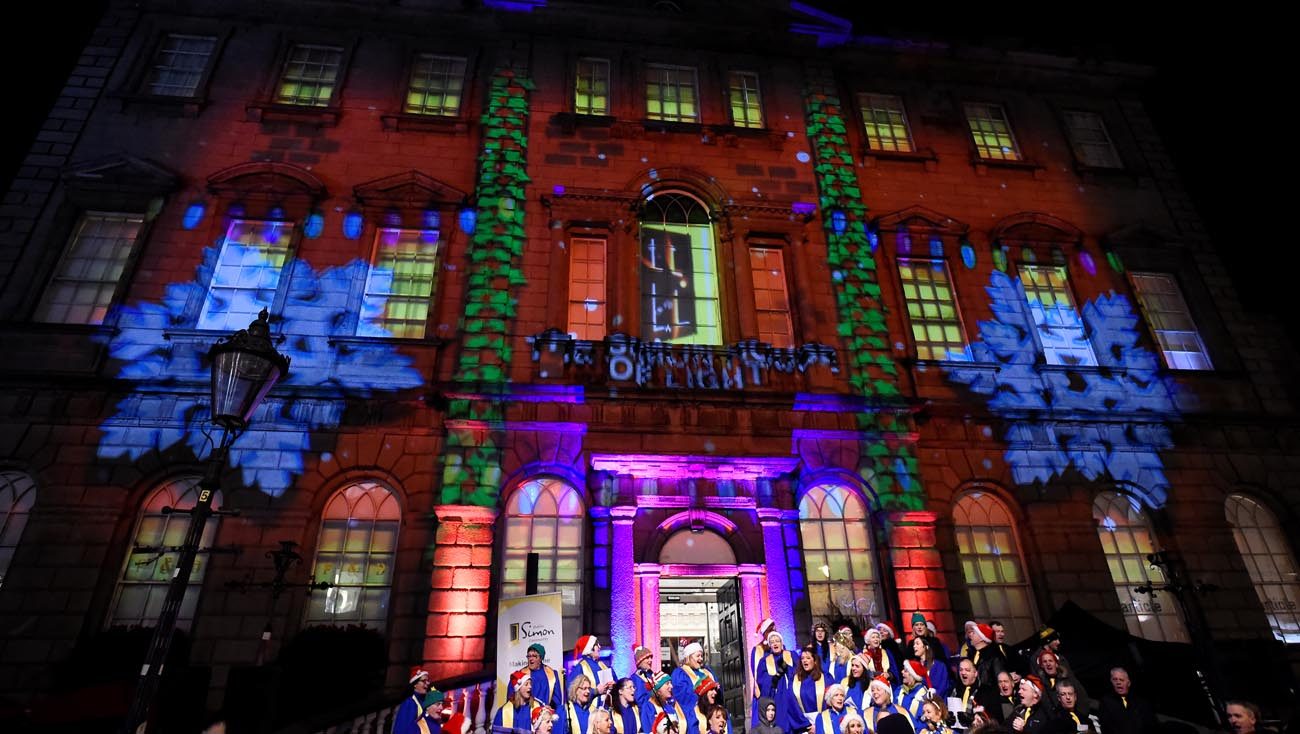 Christmas carolers sing outside a shopping center with a festive projection illuminating the front of the building Dec. 7 in Dublin. Pope Francis is expected to attend the World Meeting of Families in Dublin in August. (CNS photo/Clodagh Kilcoyne, Reuters)

VATICAN CITY (CNS) — Foreign trips, a focus on the rights and needs of migrants and refugees and a Synod of Bishops dedicated to young people all are on the 2018 calendar for Pope Francis.

His activities and the passions that drive them are familiar by now. In fact, March 13 will mark the fifth anniversary of his election as pope, succeeding retired Pope Benedict XVI.

Pope Francis, newly 81, will begin 2018 with a focus on Mary and on migrants and refugees.

As with all modern popes, Pope Francis’ Marian devotion and his concern for people forced to flee their homes have been a constant in his ministry.

But Pope Francis is the first to dedicate a celebration of World Peace Day specifically to the theme of migrants and refugees. On Jan. 1, for the 51st time, the Catholic Church will begin the new year praying for peace. The day also is the feast of Mary, Mother of God, and while Pope Francis sent a message to heads of state in November reflecting on the peace day theme, his homily at the Mass is likely to focus on Mary.

The pope’s focus on migrants and refugees will come to the fore again Jan. 14 when he adds to the normal papal liturgical calendar a special Mass for the World Day of Migrants and Refugees.

In both his message for the Jan. 14 celebration and his message for World Peace Day, Pope Francis urged Catholic involvement in the drafting of the U.N. global compacts for migrants and for refugees.

Approving the development of the compacts in September 2016, “world leaders clearly expressed their desire to take decisive action in support of migrants and refugees to save their lives and protect their rights,” the pope said in his message. He urged Catholics to get involved by lobbying their governments to include in the compacts proposals that would ensure the welcome, protection, promotion and integration of migrants and refugees.

Although work on the compacts suffered a setback when the Trump administration announced in early December it was pulling out of the process and would not be a party to the accords, the United Nations hopes to have a draft of the documents ready by February. Late in 2018, the U.N. General Assembly will hold a conference to adopt the compacts.

On Jan. 15, Pope Francis will set off for a six-day visit to Chile and Peru. As is his style, the trip will include meetings with government authorities and large public Masses, but also a visit to a women’s prison and to a home for children at risk.

As of Dec. 20, no other papal trips for 2018 had been confirmed, although Vatican officials have said it is almost certain Pope Francis will travel to Dublin in late August for the World Meeting of Families; on the same trip, he is likely to be the first pope to visit Northern Ireland.

Vatican officials also have confirmed that a September trip to Lithuania, Latvia and Estonia is under consideration. And they do not rule out a spring trip, perhaps to Africa.

One month of the pope’s calendar already is booked solid. The Synod of Bishops focusing on young people and their vocations will be held at the Vatican Oct. 3-28. In preparation for the bishops’ gathering, the Vatican has asked bishops’ conferences around the world to nominate young people to attend a pre-synod gathering March 19-24 in Rome.

Cardinal Lorenzo Baldisseri, secretary-general of the synod, said Pope Francis hopes about 300 young people — mostly, but not all, Catholics — would attend the gathering. Many of them will speak to the whole group about the hopes and concerns of young people, what they can offer the church and what they need from it. They will discuss the presentations in small groups and will be asked to prepare a summary document for the bishops attending the synod.

Changes have been made, new laws have been passed, offices have been combined to cut down on duplication. But 2017 ended without a clear indication of when a document presenting a global vision of the Curia and each of its offices would be ready.

Perhaps that is what Pope Francis wants for Christmas 2018.