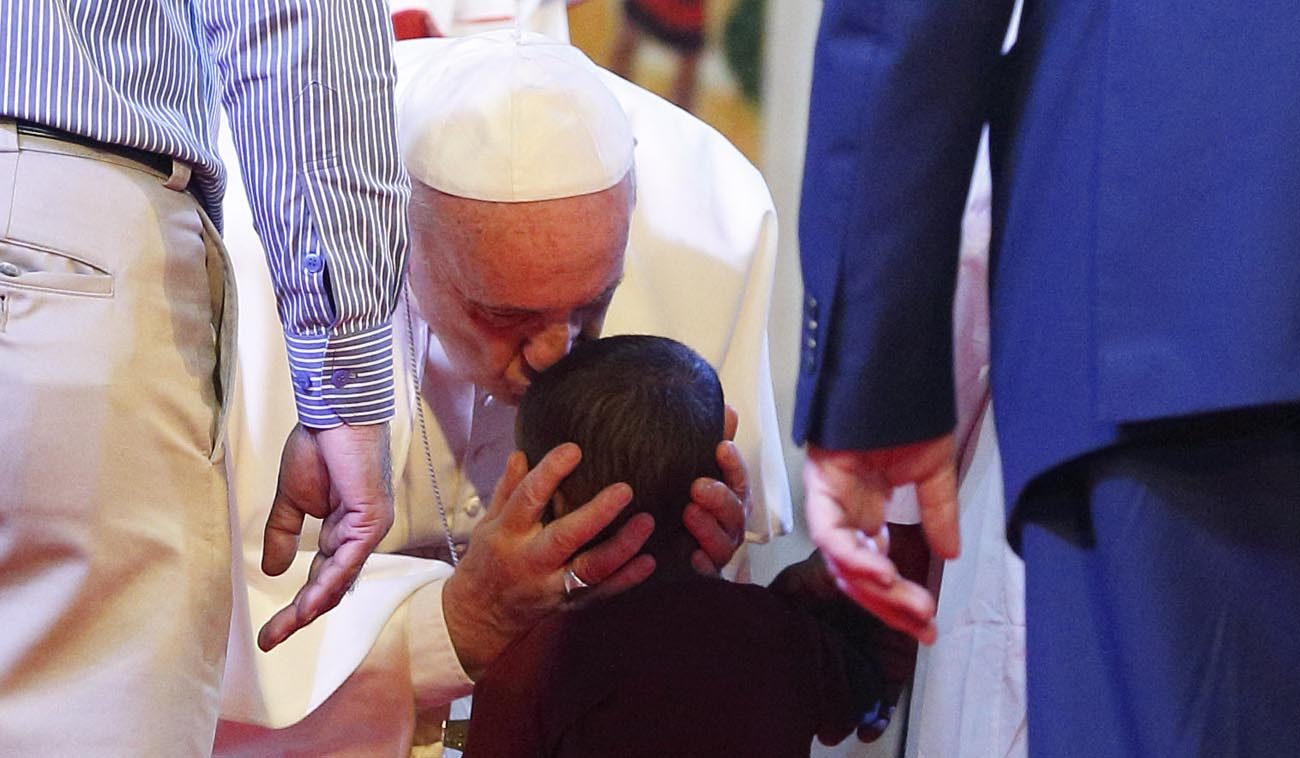 Pope Francis kisses a child as he meets Rohingya refugees from Myanmar during an interreligious and ecumenical meeting for peace in the garden of the archbishop's residence in Dhaka, Bangladesh, Dec. 1. (CNS photo/Paul Haring)

DHAKA, Bangladesh (CNS) — Each human being is created in the image and likeness of God, yet so often people desecrate that image with violence as seen in the treatment of Myanmar’s Rohingya minority, Pope Francis said.

“Today, the presence of God is also called ‘Rohingya,'” the pope said Dec. 1 after meeting, clasping hands with and listening intently to 16 Rohingya who have found shelter in Bangladesh.

“They, too, are images of the living God,” Pope Francis told a gathering of Christian, Muslim, Buddhist and Hindu leaders gathered in Dhaka for an interreligious meeting for peace.

“Dear brothers and sisters,” he told the crowd, “let us show the world what its selfishness is doing to the image of God.”

“Let’s keeping helping” the Rohingya, he said. “Let’s continue working so their rights are recognized. Let’s not close our hearts. Let’s not look away.”

The Rohingya, like all people, are created in God’s image, the pope insisted. “Each of us must respond.”

The refugees traveled to Dhaka from Cox’s Bazar, the southern Bangladeshi city hosting hundreds of thousands of refugees who have fled Myanmar. More than 620,000 Rohingya have crossed the border into Bangladesh since late August.

Speaking directly to them, Pope Francis said, “We are all close to you.”

In comparison to the suffering the Rohingya have endured, he said, the response of the people at the gathering actually is small. “But we make room for you in our hearts.”

“In the name of all those who have persecuted you and have done you harm, especially for the indifference of the world, I ask forgiveness,” he said.

Pope Francis’ remarks, which he made in Italian, were translated for the crowd and for the Rohingya. Many of them were in tears.

In his formal speech at the interreligious meeting, Pope Francis insisted “mere tolerance” for people of other religions or ethnic groups was not enough to create a society where everyone’s rights are respected and peace reigns.

Believers must “reach out to others in mutual trust and understanding,” not ignoring differences, but seeing them as “a potential source of enrichment and growth.”

The “openness of heart” to which believers of all faiths are called includes “the pursuit of goodness, justice and solidarity,” he said. “It leads to seeking the good of our neighbors.”

Pope Francis urged the people of Bangladesh to make openness, acceptance and cooperation the “beating heart” of their nation. Such attitudes, he said, are the only antidote to corruption, “destructive religious ideologies and the temptation to turn a blind eye to the needs of the poor, refugees, persecuted minorities and those who are most vulnerable.”

According to a Vatican translation, Farid Uddin Masud, speaking for the Muslim community, told the pope, “it is compassion and love which today’s world needs most. The only remedy and solution to the problem of malice, envy and fighting among nations, races and creeds lies in the compassionate love preached and practiced by the great men and women of the world.”

Masud, a famous prayer leader and advocate of dialogue and tolerance, is thought by some to have been the main target of a 2016 bombing at a major Muslim prayer service in Sholakia, Bangladesh. Four people were killed.

Praising the pope for speaking on behalf of “the oppressed, irrespective of religion, caste and nationality,” Masud particularly cited Pope Francis’ concern for the Rohingya. He said he hoped that the pope’s public support would strengthen international efforts to defend their rights.

Anisuzzaman, a famous professor of Bengali literature, told the gathering that in a world torn by strife, the pope’s message of encounter and dialogue takes on added importance.

“Those of us who are frustrated to find the forces of hatred and cruelty overtaking those of love and compassion can surely find solace in the pope’s message of peace and harmony and of fraternity and goodwill,” he said, according to the Vatican’s translation of his speech. “We note with great relief that the pope has, time and again, expressed his sympathy with the Rohingya from Myanmar, who have been forcibly ejected from their home and earth and subjected to violence and inhuman treatment.”

The pope arrived at the meeting in a rickshaw after a meeting with Bangladesh’s Catholic bishops. He had told the bishops that interreligious and ecumenical dialogue are essential part to the life of the church in Bangladesh.

“Yours is a nation where ethnic diversity is mirrored in a diversity of religious traditions,” he said. “Work unremittingly to build bridges and to foster dialogue, for these efforts not only facilitate communication between different religious groups, but also awaken the spiritual energies needed for the work of nation-building in unity, justice and peace.”

The Catholic Church’s preferential “option for the poor,” including the Rohingya refugees, is a sign of God’s love and mercy and must continue to shine forth in concrete acts of charity, Pope Francis told the bishops.

“The inspiration for your works of assistance to the needy must always be that pastoral charity which is quick to recognize human woundedness and to respond with generosity, one person at a time,” Pope Francis said.

PREVIOUS: Pray for your priests, pope urges at Mass in Bangladesh