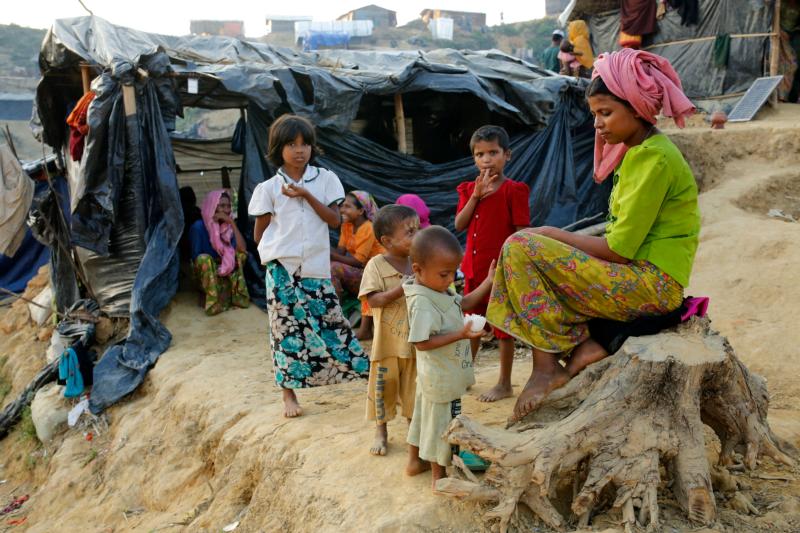 A Rohingya family sits outside their tent Nov. 20 at a refugee camp in Cox’s Bazar, Bangladesh. (CNS photo/Abir Abdullah, EPA)

DHAKA, Bangladesh (CNS) — The themes chosen by the local bishops for Pope Francis’ visits to Myanmar and Bangladesh — “Love and peace” and “Harmony and peace” — sounded naive or just too “nicey-nice” to some people.

But when love, peace and harmony are missing, the situation is pretty much hell on earth. The Rohingya refugees from Myanmar now living in teeming camps in Bangladesh could testify to that.

Pope Francis, on the other hand, wanted to testify to the Gospel. And that meant emphasizing love, peace and harmony.

The situation of the Rohingya is an extreme example of what happens when one’s ethnic or religious identity incites such strong fear or pride or that it creates ironclad categories of “us and them.”

And when the lines are drawn that clearly, the migration of the minority group is a natural result.

Holy Cross Father Daniel Groody, an associate professor of theology and global affairs at the University of Notre Dame, Indiana, told Catholic News Service he had been in Myanmar a year and a half ago studying the situation of the Rohingya, as they identify themselves, or the undocumented Muslims from Rakhine state, as the government refers to them.

“They are the most stateless people I have ever encountered,” Father Groody said. In Myanmar, “they are not only undocumented, they are so totally defined as ‘other’ that they are considered nonpersons.”

Some media and human rights groups criticized Pope Francis for accepting the advice of local Catholic leaders and not referring to the Rohingya by name while in Myanmar.

The wisdom of that decision will probably be debated for some time.

“But I think his very presence says everything,” Father Groody said.

Pope Francis has not publicly berated any government official of any country during a visit. He treats them with respect, listens and — drawing on the values they profess — he tries to show them what the next step toward the common good should be.

“It requires real care,” Father Groody said. “You wouldn’t want to see him do this gangbuster prophecy thing and ride into the sunset, thinking he’d done the heroic thing. I think he’s not just trying to be heroic; he’s trying to be a bridge-builder.”

“There’s real heroism and courage in just being able to build bridges,” the priest said. “In the long run, that may be more effective, and in the end, that’s what matters.”

Indian Cardinal Oswald Gracias of Mumbai, a member of the pope’s international Council of Cardinals, was in both Myanmar and Bangladesh for Pope Francis’ visit.

In his own country, the cardinal has seen how the identity question and ethnicity and religious belonging can become points of social tension. But it wasn’t always that way, he told CNS.

Growing up, he said, the neighbors in his apartment building in Mumbai were Hindu, Muslim and Christian. “We were very good friends. We never saw a different religion or culture as the basis for any division.”

“Now, all of a sudden, I must say that it has changed, and I blame politicians for this,” he said. “Politicians used and are still using religion to get votes.”

And in neighborhoods where people just accepted that they each had their own faith and culture, the cardinal said, now people are starting to think, “Oh, he is different from me.”

Playing up differences has had deadly results in Myanmar and India and in many other places around the world. And the fear caused by those acts of violence and terrorism have fed isolationism and an exaggerated “us-first” attitude.

In response, Cardinal Gracias said, “the whole Christian Gospel value of love seems a cliche — but it is a commitment, love is a decision to imitate Jesus” and rescue those in danger and help those in need, including migrants and refugees.

Obviously, he said, reasonable measures must be taken to ensure people allowed into a country are not coming to do harm.

“There’s a real point there, but on the other hand, when you see the tremendous amount of suffering people have undergone, when they are fleeing persecution, economic injustice and violence and they are looking for a better life and to contribute to society, you have to act,” he said.

Or, as Father Groody said, “A sovereign state’s right to protect its borders is a recognized right,” including in Catholic social teaching, “but it is never seen as an absolute right and never as reason for violating human rights. Sovereign rights must be evaluated in view of human rights and the universal destination of goods, which means that every human being should have at least the minimum necessary for a dignified life.”

As for the identity question, the Holy Cross priest said that while religion and ethnicity are often important factors in a person’s self-description, for Catholics people have an identity that goes even deeper: They are children of God.

Pope Francis flew halfway around the world to let all the people of Myanmar and Bangladesh know that’s how he sees them. But he went especially to let the Rohingya know.