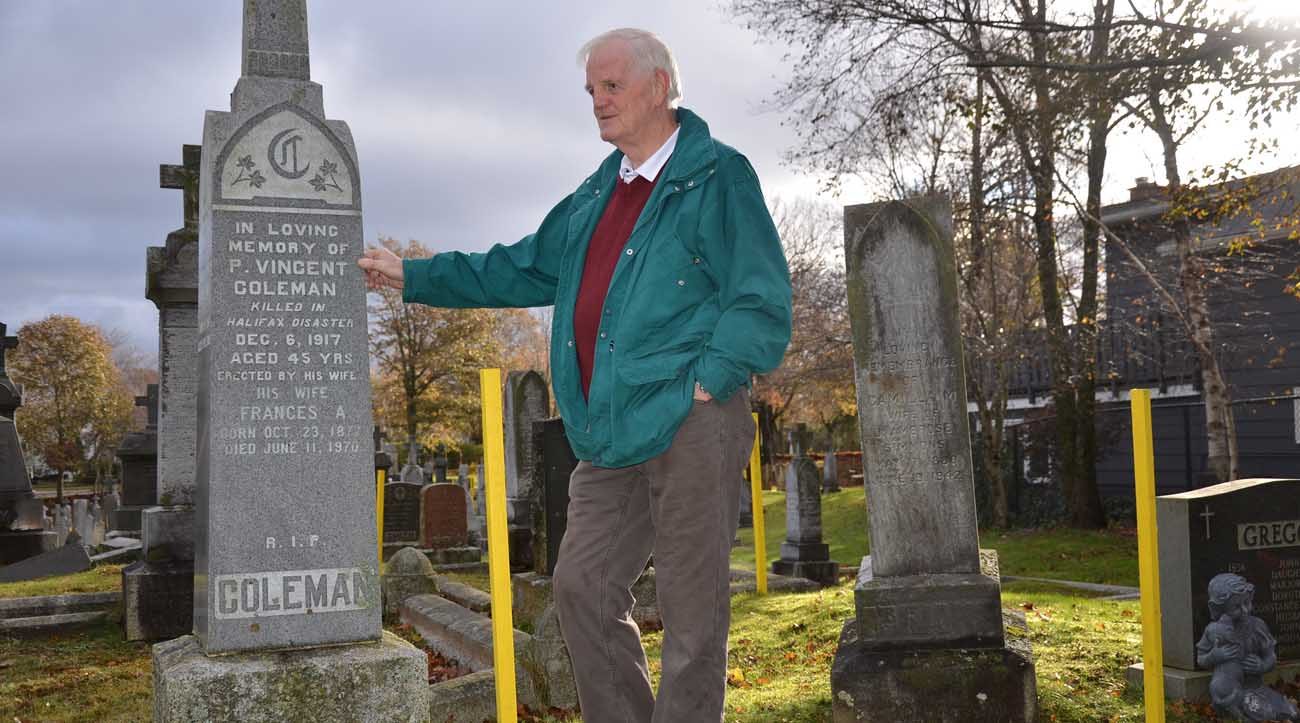 Joe McSweeney, a retired teacher who has an affinity for history and for exploring cemeteries, stands next to the Mount Olivet Catholic Cemetery gravesite of Vince Coleman in Halifax, Nova Scotia. Coleman was killed in the Halifax Explosion in 1917 that claimed the lives of 2,000 and injured 9,000 more. (CNS photo/Francis Campbell, The Catholic Register)

HALIFAX, Nova Scotia (CNS) — The tall, gray and weathered headstone in Mount Olivet Catholic Cemetery is carved with 11 names, all from the same family, and with a simple statement at the bottom: “They died Dec. 6, 1917, at 66 Veith St.”

One hundred years later, the tombstone in the west end of Halifax is a stark reminder of the catastrophic Halifax Explosion that killed 2,000 and injured 9,000 more.

Under the name of the family’s father, Joseph D. Hinch, 50, is the list of his 10 children and their ages, from 19 to 2 — Clara, Helena, Thomas, Mary, Joseph, James, Annie, Margaret, Ralph and Helen.

All were caught in the a 326-acre area around Halifax’s north end that was torn by the destructive force of the blast, just after 9 a.m. Fires ignited and hundreds of buildings were flattened or damaged, including the Catholic church the Hinch family attended, St. Joseph’s, not far from the harbor.

“Every single church in the area was damaged, all the way out to Windsor Junction (21 miles from downtown Halifax),” said Blair Beed, a local historian and author of a book on the explosion.

“Churches of all denominations,” Beed said. “Four churches were destroyed. The Methodist, the Presbyterian, the Anglican and the Catholic churches in that neighborhood. Every other church, Catholic and non-Catholic, and the synagogues downtown were damaged in some way. Some of them were so damaged, like St. John’s Presbyterian on Brunswick, it was torn down and they moved to another location to rebuild.”

The explosion was ignited after the French ship Mont Blanc, carrying 2,500 tons of high explosives and a deck-load of monochlorobenzene, collided with the Imo, a Norwegian vessel, in what is known as the narrows, a strait that connects the Halifax Harbor to Bedford Basin. It was the world’s largest man-made explosion before nuclear weapons. The blast took its greatest toll in the Richmond district of Halifax, where St. Joseph’s was located.

“Fifty percent of Halifax was Roman Catholic,” Beed said. “Fifty percent, like it is now, but they don’t go to church now.”

Halifax and the city of Dartmouth, across the harbor, had a combined population of about 65,000 at the time. About 1,500 of those were parishioners at St. Joseph’s. More than a quarter of them died that Thursday morning.

“Four hundred and four people of that congregation were killed,” Beed said. “They lived and worked there. Back in those days, transportation was tough so you lived where you worked.

“There were a lot of big families there.”

The Hinch gravesite, a pronounced example of the carnage reaped by the blast, has a bright yellow stake nearby. There are nearly 400 of the yellow stakes at Mount Olivet and the Holy Cross cemetery, a Catholic cemetery in the downtown area. The yellow stakes were authorized by the city’s Catholic Cemeteries Commission, painted and put in place by a summer student in advance of the 100th anniversary of the explosion. Each stake represents a Catholic killed in the blast.

“The whole story of the Halifax Explosion could be attached to graves and gravesites at Mount Olivet Cemetery,” said Joe McSweeney, a retired teacher who has an affinity for history and for exploring cemeteries.

Aside from the Hinch family stone, McSweeney said there are more than 330 Catholic victims of the explosion buried at Mount Olivet. One of those is the gravesite of Vince Coleman, the train dispatcher immortalized for his bravery in staying at his post to warn an incoming train of the pending danger. Coleman died in the explosion as did his office manager, William Lovett, and his stenographer, Florence Young. They, too, are buried at Mount Olivet.

McSweeney said 10 firefighters answered the call to tackle the fire on the Mont Blanc, before the fire turned into an explosion. All 10 were Catholic, nine were killed and eight bodies recovered. The one firefighter who survived was William (Billy) Wells, who was thrown from the driver’s seat of the firetruck.

Explosion victims are interred at cemeteries across Nova Scotia, and even beyond.

“There were 50 different cemeteries across Nova Scotia that bodies were sent to,” Beed said. “It was wartime so a lot of people in the city were from the rural area working in the war industries and when they died, they simply were sent back to their home community to be buried in the family plot.

“One Catholic soldier was sent home to Levis, Quebec. It really was a national event.”

Campbell is a stringer for the Toronto-based Catholic Register.