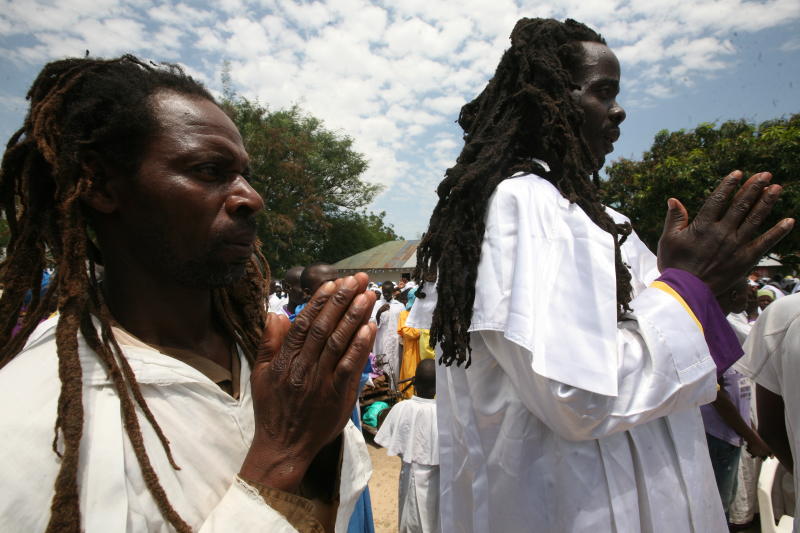 Members of Legio Maria pray and speak in tongues or profess prowess in performing miracles, which drives some local Catholics to choose the sect and abandon the main Catholic Church in Kisumu, Kenya. (CNS photo/Doreen Ajiambo)

KISUMU, Kenya (CNS) — As the drumbeats grew louder at the Jerusalem Church, members of the Legio Maria movement bowed in unison before they began speaking in tongues, praying and singing.

Their “cardinal,” Raphael Midigo, dressed in a purple gown, appeared from behind a curtain near the pulpit and began to pray for the sick, the blind, deaf, disabled, the mentally ill and couples who could not bear children. Worshippers responded in shouts as others fainted, overcome with emotion.

“I can now hear. I can speak. I thank God,” shouted 30-year-old Jacinta Atieno, who claimed to be deaf in  both ears for 10 years. “I came all the way from Nairobi to receive a miracle,” she said. “I have suffered for a long time. I thank the man of God for healing me.”

Such supposed miracles in the Legio Maria sect have raised concerns among Catholic parish leaders in western Kenya. Thousands of Catholics have joined the sect in search of healing.

“This is worrying because leaders from this church (Legio Maria) have their own selfish agendas, which they achieve by making people believe that they have power to heal and provide solutions,” said Geofrey Omondi, a catechist of the Nyatike Catholic church in Migori, a nearby town.

Founded in the early 1960s by Catholics who claim to have been visited by Mary for decades prior, Legio Maria members believe they have received special messages about the reincarnation of Jesus as an African. Often, they deify sect co-founder Simeo Ondeto, a catechist who died in 1992.

“We, as the followers of Legio Maria, believe that Messiah Ondeto is the Christ and resurrected to heaven with God,” Midigo said after the service. “We are only waiting for his third coming to take his faithful to heaven.”

The Catholic Church has expelled Legio Maria members, saying they were practicing illegitimate exorcisms and other rituals. In its early days, it had around 90,000 members, mostly Catholics from the Luo tribe. Today, the sect claims around 4.3 million members in Kenya, Sudan and beyond.

In Kenya, they take orders from their “pope,” Romanus Ongombe. They also claim to have 58 cardinals throughout the country.

“We are the true church, not the Catholic,” said Midigo. “We experience the power and work of the Holy Spirit, which cannot be found in the Catholic Church. That’s the reason why people are coming to Legio Maria church and leaving Catholicism. We have a huge following.”

Many local Catholics said they remain confused, years after the formation of the sect. Legio Maria conducts the same types of services as the Catholic Church. Its members sing hymns. They have what they describe as a traditional Latin mass. They recite the rosary and even have nuns.

“We are sometimes confused to decide which church to go,” said Peter Ogola, a member of the sect who left the Catholic Church in May after he said he saw the image of Mary and baby Jesus engraved on a rock in the area. “Both churches look the same in the way they conduct their services. But Legio Maria church does it differently. They have the power to solve problems through prophesy and miracles.”

“You can’t just go to a church which does not offer solutions to your problems,” said Ogola as he went down on his knees to pray. “I’m going to speak with Ondeto, who is going to give me a message of hope to bring to his people. I have the power to spiritually cleanse people with mental illness and even pray over the sick and the needy.”

“They have been lying to people who are seeking divine intervention in their lives, (telling them) that they are the official Catholic Church. That’s a pure a lie,” said Omondi.

But Msgr. Nicholas Moses Omollo, vicar general of the Archdiocese of Kisumu, said he does not see the sect as a threat.

“We have had a lot of converts from them coming back to Catholic Church again,” he said. “How can they be a threat to us, and we are the one who expelled them from the Roman Catholic Church?”

Religious analysts said the Catholic Church should not to ignore the sect’s influence.

Kenyans’ cultural attachment to witchcraft has lured them to churches where visions, dreams and superstitious beliefs are explained in religious terms by church elders, said retired Bishop Elvis Otiendo of the Pentecostal Church of Kenya.