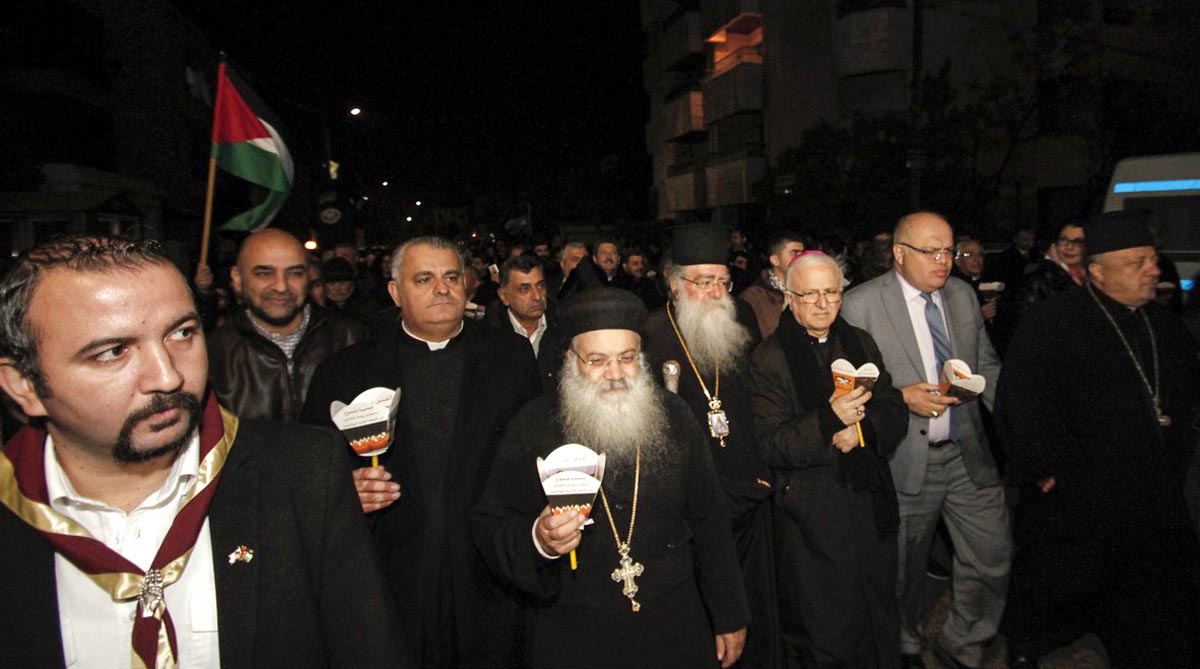 Catholic and Orthodox leaders and 2,000 of their parishioners in Amman, Jordan, hold a silent candlelight march Dec. 13. The event marked their rejection of the recent decision by President Trump to recognize Jerusalem as the capital of Israel and to move the U.S. embassy there. (CNS photo/courtesy Catholic Center for Studies and Media)

BEIRUT (CNS) — Lebanon’s Christian and Muslim leaders denounced the “unjust” decision of U.S. President Donald Trump to recognize Jerusalem as Israel’s capital and demanded that it be reversed.

In a Dec. 14 statement at the end of an interreligious summit, the leaders said “that, in addition to violating the laws and international charters,” the decision ignores the fact that Jerusalem is a city holy to Christians, Muslims and Jews.

The previous evening, in Amman, Jordan, Christian leaders led about 2,000 parishioners in a candelit march to protest the U.S. decision.

“For us, Christian and Muslim Arabs, when we lose Jerusalem, we lose everything,” said Father Rifat Bader, director of the Catholic Center for Studies and Media, reading a statement. “We lose the core of our faith, because everything began in Jerusalem. We were all born in Jerusalem.”

The interreligious summit in Lebanon, led by Lebanese Cardinal Bechara Rai, Maronite Catholic patriarch, gathered Catholic and Orthodox patriarchs and representatives, as well as leaders of the nation’s Protestant churches and Sunni, Shiite and Druze communities.

Participants stressed that Jerusalem “has a privileged position in the consciences of believers of these faiths.”

“The U.S. president’s decision, based on special political calculations, is a challenge and a provocation for more than 3 billion people and touches on the depth of their faith,” the statement said.

They noted that the international community “has adhered to the resolutions of the United Nations, which consider Jerusalem and the rest of the West Bank to be occupied territory,” so most countries have “refrained from establishing embassies in occupied Jerusalem.”

They appealed to the Arab and international communities “to pressure the U.S. administration to undo this decision, which lacks the wisdom that real peacemakers need.”

They also called for the American people and their civic and religious organizations to raise their voices and warn Trump and his administration “of the unjust decision that will certainly push the Middle East again into a new cycle of violence.”

In his opening address, Cardinal Rai said he did “not know if the American people agree with their president’s decision,” but he noted that the U.S. bishops have rejected moving the U.S. Embassy from Tel Aviv to Jerusalem since 1984. He said he hoped for the bishops’ continued support.

He also said the interfaith leaders “categorically reject the Judaization of this holy city.”

In Jordan, Father Bader told Catholic News Service the Dec. 13 March was a “condemnation of the decision” by Trump and a call to keep Jerusalem’s status quo. He said the Christian leaders also wanted to encourage diplomatic efforts by Jordan’s King Abdullah on Jerusalem. Jordan’s king is recognized as the custodian of Christian and Muslim holy sites in Jerusalem under its 1994 peace treaty with Israel.

In his statement, Father Bader called Trump’s decision “unjust to the Palestinians and contrary to United Nations and other international resolutions.”

“Jerusalem is calling on people to stand with it,” he said, adding that Christians and Muslims stand in unity to face any act that endangers the Holy City.

King Abdullah has called Trump’s decision a “dangerous” move and a threat to peace, saying “there is no alternative to Jerusalem as the key to ending the historical conflict in the Middle East.”

“We have constantly warned of the danger of unilateral decisions on Jerusalem outside the framework of a comprehensive solution that fulfils all the legitimate rights of the Palestinian people to liberty and an independent state, with East Jerusalem as its capital,” he said.

“Moreover, attempts to Judaize Jerusalem and alter its Arab, Islamic, and Christian identity will unleash further violence and extremism; for the city is holy to the followers of the three monotheistic faiths,” King Abdullah said. “Our right, Muslims and Christians, to Jerusalem is eternal.”

Contributing to this story was Dale Gavlak in Amman.