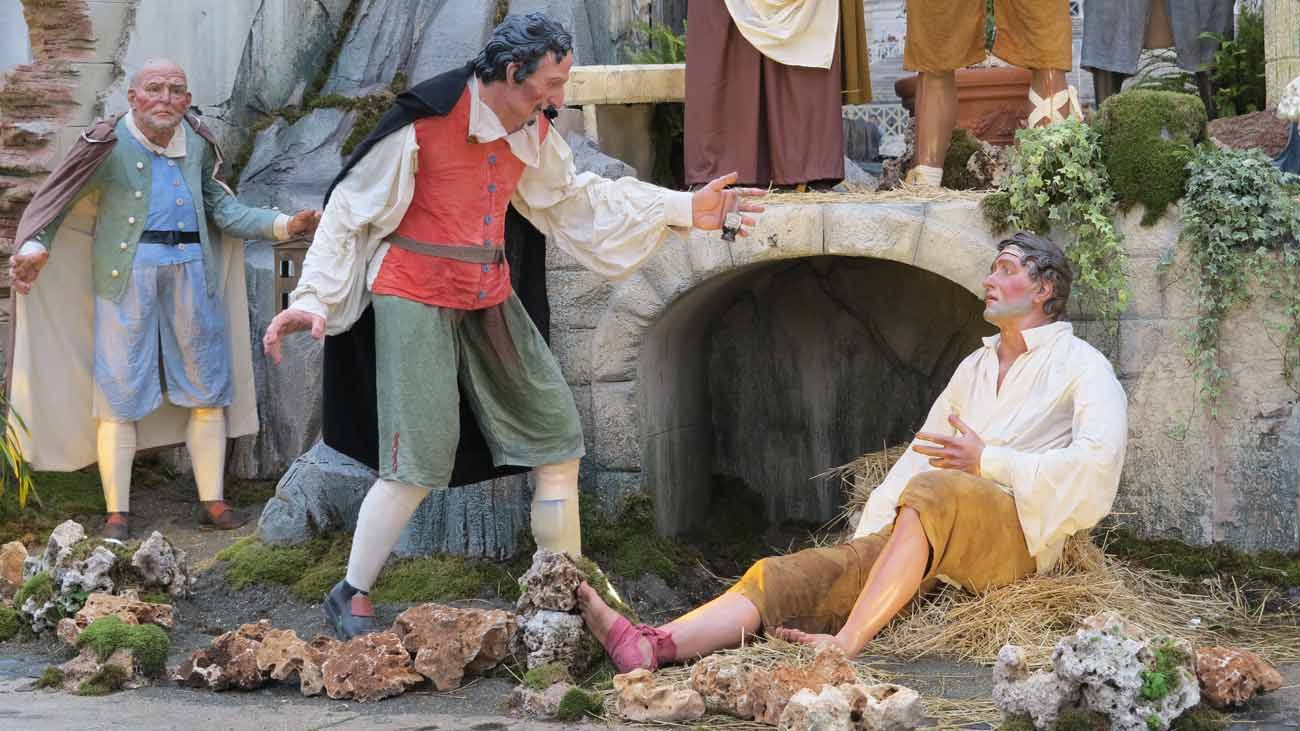 Life-size statues depict the corporal work of mercy of visiting the sick in the Nativity scene in St. Peter's Square at the Vatican Dec. 14. (CNS photo/Junno Arocho Esteves)

VATICAN CITY (CNS) — The Nativity scene in St. Peter’s Square is not getting rave reviews: The backdrop does not look like a stable and the characters in need — hungry, naked, dead, imprisoned — don’t exactly evoke a silent night when all was cozy, calm and bright.

Franciscan Father John Puodziunas said he didn’t like it at first.

In addition to Mary and Joseph — baby Jesus will appear only on Christmas — the scene includes figures of people who illustrate the ongoing need for the corporal works of mercy, including feeding the hungry, clothing the naked, burying the dead, caring for the sick and visiting those in prison.

As Father Puodziunas, a friar from Philadelphia who is now general treasurer of the Order of Friars Minor, stood in St. Peter’s Square, he said he realized “this really captures what I believe the Nativity set is about. It’s about ‘Where am I today? Where is the world today? Where is the church today?'”

The Vatican display, he said, “brings the manger scene into our present world reality to remind us that this is a God who continues to step into our world. It isn’t just something that happened 2,000 years ago.”

According to legend, it was St. Francis of Assisi, the founder of Father Puodziunas’ order, who invented the Nativity scene in 1223 by bringing straw, an ox and an ass to the side of a hill where Christmas Mass was about to be celebrated.

Father Puodziunas conceded Nativity scenes may have been around before St. Francis brought one to life in Greccio, Italy, but the Franciscan is certain the friars were responsible for spreading the tradition and bringing it into people’s homes.

“Why did St. Francis do the crib scene on the side of the mountain? Because the people were not able to receive the child into their lives,” he said. Back then, like today, the obstacles may have been “busyness or anger or war or the past or concerns.”

But by bringing the people of Greccio to the manger, he said, St. Francis hoped they would be able to experience again the power and awe of God taking human flesh, becoming one of them and then offering his life for them.

“The whole idea of the creche speaks to so many feelings and emotions we have,” Father Puodziunas said. “The child, manger, animals, night, outdoors, emptiness” — they all communicate feelings that endure through time and can be recreated anywhere.

While there probably was a catechetical element to St. Francis’ creche, Father Puodziunas believes it was more spiritual and experiential than education. “It was about making the story of Christ come alive in their lives…. This child steps into the world we have today, into our own lives, not as a child, but as a savior.”

The scene also is a reminder of humanity’s poverty, not in the sense of things that people do not have, but in the sense that there is a void in everyone that only God can fill, he said. “Love, peace, mercy, freedom, joy — these are the real poverties of the world” and the gifts that the Christ child brings.

St. Francis believed that “we’re not all that bad,” but that God steps into the world to offer more, he said.

“As pretty as our manger sets are,” he said, “the reality is that that first manger wasn’t a pretty sight and that the world that this child steps into isn’t always pretty. And yet, this child chooses to step into this world.”

The inclusion of animals in a Nativity scene not only helps illustrate Jesus’ birth in a stable, he said. “Clearly, the Incarnation touches all of creation” and “all things are created for the purpose of praising God.”

But, he said, “we are not a ‘Hallmark Christmas’ people,” life gets messy, but in the Gospel Jesus talks about the truth being revealed to the smallest children.

As they “grow up,” Father Puodziunas said, many people build walls and other obstacles to experiencing God’s love for them and to seeing how God is stepping into their lives.

When he was in parish ministry, he said, he would bring the little children up to the Nativity scene and tell them there was something they must tell their parents and older siblings “because they forget,” and that is: “Jesus is born.” And after Mass, he would tell them, “You need to bring them up to the manger scene.” 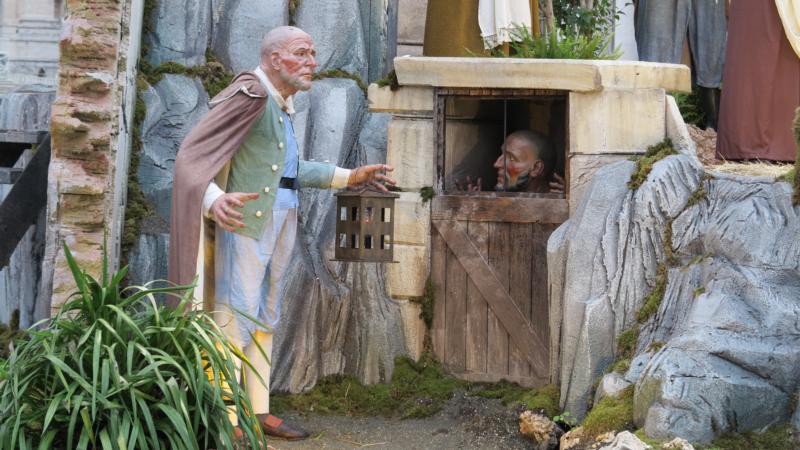 Life-size statues depict the corporal work of mercy of visiting the imprisoned in the Nativity scene in St. Peter’s Square at the Vatican Dec. 14. (CNS photo/Junno Arocho Esteves)

PREVIOUS: Bishops condemn selling of Nigerians into slavery in Libya