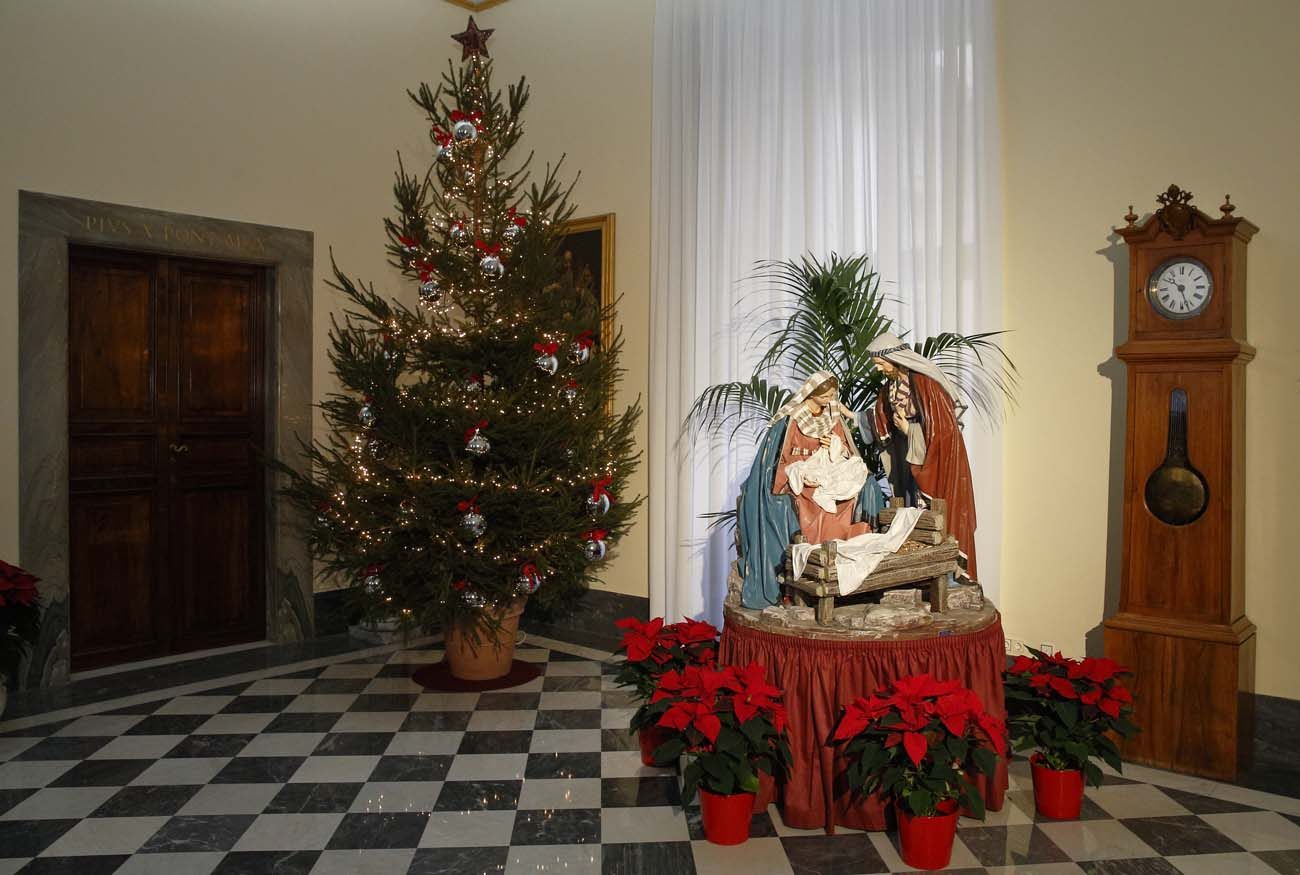 A Nativity scene and a Christmas tree are seen in the Apostolic Palace at the Vatican Dec. 7. (CNS photo/Paul Haring)

VATICAN CITY (CNS) — A Nativity scene and Christmas tree, like those displayed in St. Peter’s Square, are visible reminders of God’s benevolence and closeness to all men and women, Pope Francis said.

The traditional Christmas displays are “the signs of the heavenly Father’s compassion, of his participation and closeness to humanity who experience not being abandoned in dark times, but instead visited and accompanied in their difficulties,” the pope said.

“Every year, the Christmas Nativity scene and tree speak to us through their symbolic language. They make more visible what is captured in the experience of the birth of the Son of God,” Pope Francis said Dec. 7 in a meeting with delegations from Poland and Italy, responsible respectively for the 2017 Vatican Christmas tree and Nativity scene.

The centerpiece of the Vatican’s Christmas holiday decorations is the towering 92-foot spruce tree.

Measuring nearly 33 feet in diameter, the tree was donated by the Archdiocese of Elk, Poland, and transported to the Vatican on a flatbed truck traveling over 1,240 miles across central Europe.

Thanking the members of the Polish delegation, the pope said the tree’s soaring height “motivates us to reach out ‘toward the highest gifts'” and to rise above the clouds to experience “how beautiful and joyful it is to be immersed in the light of Christ.”

“The tree, which comes from Poland this year, is a sign of the faith of that people who, also with this gesture, wanted to express their fidelity to the see of Peter,” the pope said.

The Nativity scene was donated by the Benedictine Abbey of Montevergine, located in southern Italy. Created in a traditional 18th-century Neapolitan style, it covers a surface of over 860 square feet and features 20 terracotta figures, some as tall as 6 feet.

The representation of the night of Jesus’ birth, the pope said, is “inspired by the works of mercy” and is a reminder “that Jesus told us: ‘Do to others what you would have them do to you.'”

“The crib is the evocative place where we contemplate Jesus who, taking upon himself human misery, invites us to do the same through act of mercy,” Pope Francis said.

As it was last year, the Christmas tree was adorned with ornaments made by children receiving treatment at several Italian hospitals.

“These children, with their parents, participated in a ceramics recreational therapy program” organized by the Countess Lene Thune Foundation for young boys and girls suffering from oncological and hematological disorders, the Vatican said Oct. 25.

Additionally, children from the central Italian Archdiocese of Spoleto-Norcia, which was devastated by earthquakes in 2016, also made ornaments for the Christmas tree.

Pope Francis thanked the children and told them their ornaments are a personal witness of Jesus “who made himself a child like you to tell you that he loves you.”

After the Vatican’s tree-lighting ceremony later that evening, he added, “pilgrims and visitors from around the world will be able to admire your work.”

“Tonight, when the lights of the nativity scene are turned on and the Christmas tree lights up, even the wishes you have transmitted through your decorative works will be bright and seen by everyone,” he said.

The tree will remain in St. Peter’s Square until the feast of the Lord’s Baptism Jan. 7, the Vatican said.

NEXT: Australian archbishop urges youth to be spiritual flamethrowers