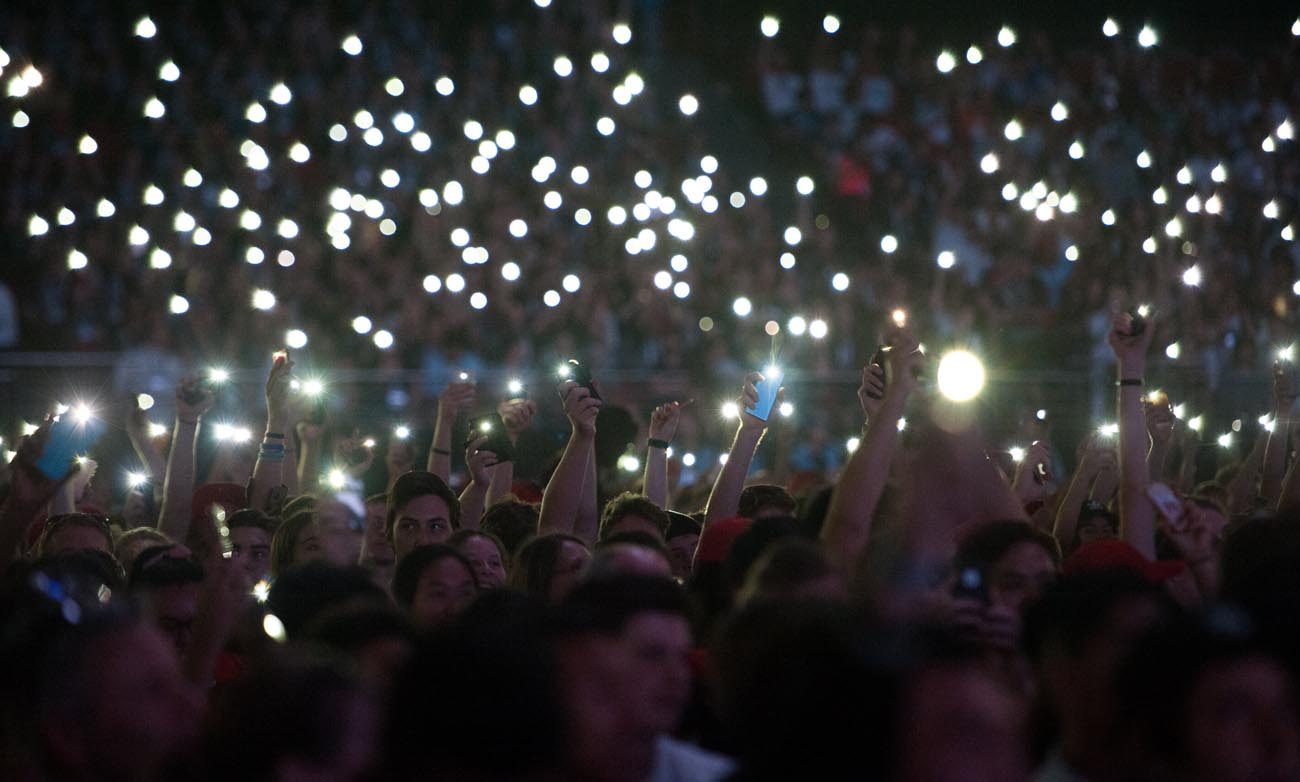 An estimated 20,000 people use their cell phones to light a stadium during the opening of the Australian Catholic Youth Festival Dec. 7. (CNS photo/courtesy Archdiocese of Sydney)

“You must be spiritual flamethrowers. You must have the awesomeness of an Australian bush fire, without the destruction,” he said at the opening of the Australian Catholic Youth Festival Dec. 7.

The opening of the three-day event included U.S. Catholic singer Matt Maher getting bishops dancing in the aisles with young people. Australian Aboriginals sang and danced, Maronite Catholic drummers mesmerized the crowd and Father Rob Galea, a popular Australian singing priest, challenged any bishop who was brave enough to join him on stage for a some spiritual “surfing.”

Sydney Auxiliary Bishop Richard Umbers accepted the challenge and joined Father Galea, jumping side to side in surfer poses as they belted out lyrics glorifying God.

Archbishop Fisher, the Australian bishops’ delegate for youth, told reporters: “Right from the start you could sense the Holy Spirit among them (young people). … And I don’t mean that everything’s good for them. A lot of them have doubts and questions and, probably, struggles in their lives, but you really saw a good side of young Catholic Australia this morning.”

An hour earlier, Archbishop Fisher’s speech to the opening plenary was interrupted repeatedly by cheers.

He said many people who knew Mary would have wondered at her claims of being visited by an angel, her out out-of-wedlock pregnancy and what might seem like religious fanaticism.

“You’d have to say this girl’s life won’t amount to much,” he told the packed stadium. “Actually, she’s the most famous woman in history.”

He told the youths that by saying yes to God, as Mary had, young people could also allow God to make something great out of them, too.

He reminded the youth of Pope Francis’ challenge to young people at the last World Youth Day in Poland to have a faith that “opens new horizons for spreading joy.” The pope’s words were adopted as the official theme for the Australian festival.

“To every young woman and man here this morning I say: Open your eyes and hearts and minds to new horizons,” Archbishop Fisher said.

He also told them Australia’s bishops had listened to their concerns.

“We’ve heard many of you say you’re concerned about mental health issues, including depression; about personal identity problems, including sexual, political and spiritual identity; about your employment and housing future; about forming and sustaining good relationships; about the direction of our politics, culture and church on issues of life and love, justice and mercy, of refugees, trafficking and ecology; about avoiding loneliness and finding a community of similar ideals and real support and so on,” he told them.

“Well, the church is here for you and cares passionately about those very things, too. The bishops have organized this big festival for you, to open new horizons for you, to listen to you, above all to demonstrate the church’s closeness, God’s closeness to you.”

NEXT: Protests cause uncertainty in Bethlehem, but for now, pilgrims visit