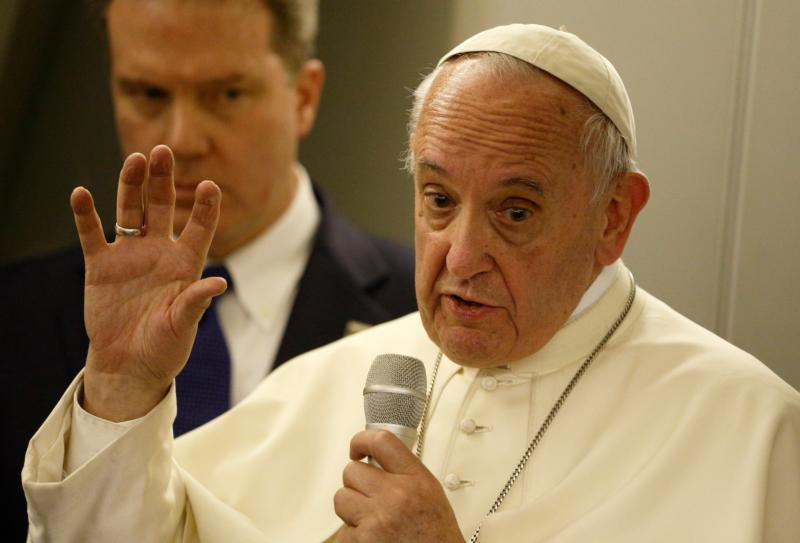 ABOARD THE PAPAL FLIGHT FROM BANGLADESH (CNS) — Well aware he was disappointing some people by not using the word “Rohingya” publicly in Myanmar, Pope Francis said his chief concern had been to get a point across, and he did.

“If I would have used the word, the door would have closed,” he told reporters Dec. 2 during his flight from Dhaka, Bangladesh, to Rome.

He spent almost an hour answering reporters’ questions after his six-day trip to Myanmar and Bangladesh, but insisted that most of the questions be about the trip.

In his speeches in Myanmar, Pope Francis repeatedly referred to the obligation to defend the lives and human rights of all people. But he did not specifically mention the Rohingya, a Muslim minority from Rakhine state. The Myanmar military, claiming it is cracking down on militants, has been accused of a massive persecution of the Rohingya to the point that some describe it as “ethnic cleansing.”

More than 620,000 Rohingya have fled across the Bangladeshi border just since August, joining hundreds of thousands already living in refugee camps there.

For the government of Myanmar, the Rohingya do not exist; instead they are considered undocumented immigrants.

“I knew that if, in an official speech, I would have used the word, they would close the door in my face,” the pope told reporters who asked why he did not name the group. However, “I described the situation” publicly, knowing “I could go further in the private meetings” with government officials.

“I was very, very satisfied with the meetings,” the pope said. “I dared to say everything I wanted to say.”

It is true, he said, “I did not have the pleasure” of making “a public denunciation, but I had the satisfaction of dialoguing, allowing the other to have his say and, in that way, the message got across.”

Still, finally being able to meet some of the Rohingya refugees Dec. 1 in Bangladesh was an emotional moment.

Arrangements were made for 16 refugees to travel to Dhaka from Cox’s Bazar, where the huge refugee camps are, so they could join the pope and Bangladeshi religious leaders for a meeting devoted to peace.

The refugees had traveled so far and been through so much that Pope Francis said he could not just let them shake his hand and be whisked away, as some event organizers seemed to think was proper.

He had a few minutes with each of them, listening to their stories with the help of an interpreter, holding their hands and looking into their eyes.

“I was crying, but tried to hide it,” the pope told reporters. “They were crying, too.”

Listening to them was emotional, he said, and “I couldn’t let them leave without saying something” to them. So he asked for a microphone and spoke about their God-given dignity and the obligation believers of all faiths have to stand up for them as brothers and sisters. He also apologized for all they had suffered.

Pope Francis refused to give reporters details about his private meetings with government officials and military leaders in Myanmar, but insisted they were marked by “civilized dialogue” and he was able to make the points important to him.

The pope was asked what he thought of recent criticism by human rights groups of Aung San Suu Kyi, the Nobel Peace Prize laureate and de facto leader of Myanmar’s civilian government, over her handling of the Rohingya crisis. Pope Francis responded that people must take into account the challenges that are part of Myanmar’s transition from military rule to democracy.

The same God who made the meeting with the Rohingya in Dhaka possible will continue to work marvels, Pope Francis said.

PREVIOUS: Harmony must begin within church, pope says in Bangladesh

NEXT: Political power comes from serving, not lording over others, pope says