Harmony must begin within church, pope says in Bangladesh 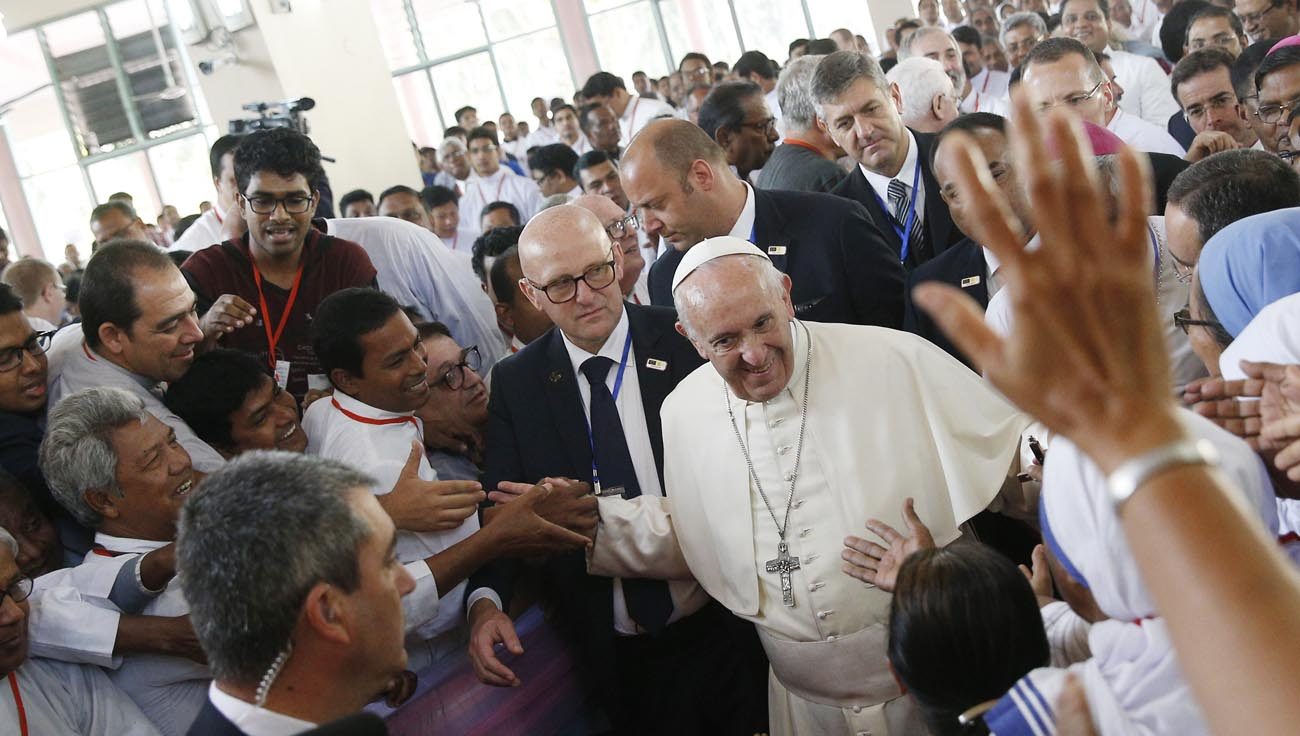 Pope Francis arrives for a meeting with priests, religious and seminarians at the Church of the Holy Rosary in Dhaka, Bangladesh, Dec. 2. (CNS photo/Paul Haring)

DHAKA, Bangladesh (CNS) — Devoting his last day in Bangladesh to the nation’s tiny Catholic community, Pope Francis told clergy and religious that there was no way they could promote interreligious harmony in the country if their communities were marked by gossip, division and bitterness.

“There are many enemies of harmony,” the pope told priests, religious, seminarians and bishops Dec. 2. One of the deadliest, and most common, enemies is gossip.

“You might want to criticize the Holy Father for being repetitive, but this is important to me,” he told the church workers gathered in Dhaka’s Holy Rosary Church.

Speaking badly of someone behind his or her back creates distrust, he said. “It’s a kind of terrorism,” destroying everything.

When the temptation to gossip arises, the pope said, “bite your tongue. You might harm your tongue, but you won’t harm your brother or sister.”

Pope Francis began the day by visiting a home run by the Missionaries of Charity in Dhaka. Accompanied by the sari-clad superior, he went from bed to bed in the wards for seriously ill adults and children.

Taken by either hand by two little girls in pink and white tulle dresses, Pope Francis was led to the nearby Church of the Holy Rosary for the meeting with hundreds of priests, religious and seminarians from throughout the country.

Archbishop Moses M. Costa of Chattagong, president of the bishops’ commission for clergy and religious life, told the pope that the country’s Catholics make up less than 1 percent of the population. The 372 priests and more than 1,250 women religious are “satisfactory” for serving the Catholic community, the archbishop said.

But, he said, “compared to the huge population of the country, the number of priests and nuns is negligible.”

Pope Francis listened to the testimonies of several priests and a sister. Then he heard from Holy Cross Brother Lawrence Dias, who has been a religious for 63 years. Currently he serves as a hermit at Mariam Ashram, Bangladesh’s national Marian shrine. His life is devoted to prayer.

“Many priests and religious and also laypeople have come to the ashram to quench their spiritual thirst,” he told the pope. “I am serving as the guru.”

Instead of waiting for the elderly brother to go up to him, as the others had done, Pope Francis rushed to Brother Dias’ place and embraced him.

Joining the pope and the Bangladeshi priests and sisters was Oblate Father Andrew Small, U.S. director of the Pontifical Mission Societies. The U.S. arm of the Catholic mission support agency provided more than $1.15 million in aid to the church in Bangladesh in 2017.

Ignoring his prepared text for the gathering, Pope Francis spoke in Spanish and had his words translated into English by an aide.

“I prepared a speech of eight pages for you,” he said, evoking laughter and applause. But, he said, he didn’t want them to be bored.

First, he said, the church workers always must remember that one’s vocation is a seed that “does not belong to you or to me. It is God’s. And it is God who provides for its growth.”

With tenderness and prayer, each person is called to water the seed and be attentive as possible to providing all it needs to grow.

“If there is no such tenderness, the plant is very small, it doesn’t grow and it will dry out,” he said. But it also is true that sometimes “the enemy comes and sows another kind of seed and there is a risk that the seed can be threatened and not grow. How awful it is to see weeds in the rectories where you live, in episcopal conferences, in religious communities and seminaries.”

“In this garden of the kingdom of God,” he said, “there isn’t just one plant growing; there are thousands, all of us, and community life is not easy. Human defects, our limitations, threaten community life and they threaten peace.

But if the Catholic community itself is not marked by harmony, he said, there is no way it can contribute authentically to strengthening harmony among the many religions present in Bangladesh.

The other essential characteristic is joy, Pope Francis told them. “I assure you when you meet a priest, religious, seminarian or bishop who is really unhappy, has a sad face, you want to ask, ‘What did you have for breakfast, vinegar?'”

On the other hand, he said, “I feel great tenderness when I meet elderly priests or nuns who have lived a happy life, who are full of joy and peace.” Elderly nuns who have cultivated joy, even through moments of pain, have “impish eyes … sparkling eyes … their eyes are acute because they have the eyes of God.”

NEXT: Pope expresses satisfaction with meetings on Rohingya crisis