Pope: Guadalupe feast shows Mary’s closeness to those on margins 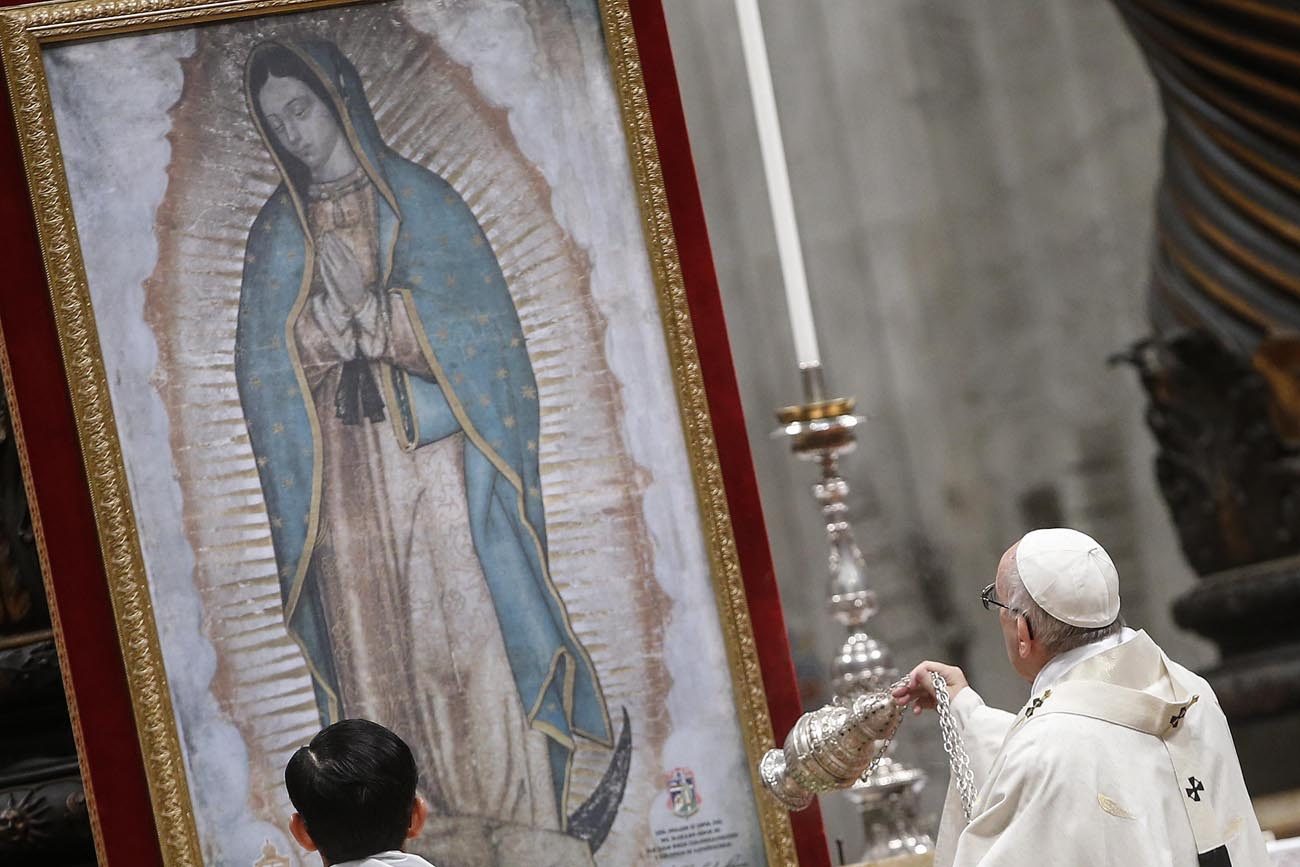 Pope Francis swings a censer in front of an image of Our Lady of Guadalupe as he celebrates Mass Dec. 12 marking her feast day in St. Peter's Basilica at the Vatican. (CNS photo/Fabio Frustaci, EPA)

VATICAN CITY (CNS) — The appearance of Our Lady of Guadalupe, which mirrored that of the indigenous people of the time, is a sign of Mary’s closeness to those who are marginalized, Pope Francis said.

Like St. Juan Diego, who felt of no importance at being chosen by Mary because of his indigenous heritage, marginalized people in today’s world are often made to feel worthless by conditions imposed upon them, the pope said in his homily during a Mass in St. Peter’s Basilica Dec. 12, the feast of Our Lady of Guadalupe.

“Among them are the indigenous and Afro-American communities, who often are not treated with dignity and equality of conditions; many women who are excluded because of their sex, race, or socioeconomic situation; young people who receive a poor education and have no opportunities to advance in their studies or to enter into the labor market so as to move ahead and establish a family; many poor people, unemployed, migrants, displaced, landless peasants, who seek to survive on the informal market; boys and girls subjected to child prostitution, often linked to sex tourism,” he said, quoting a 2007 Latin American bishops’ council document he helped write.

Processing into the basilica dressed in white, the symbol of purity, Pope Francis made his way to a replica of St. Juan Diego’s tilma, which bears the image of Mary, who appeared to the indigenous saint in 1531. The pope stood before the image, bowing reverently and censing it three times.

In his homily, Pope Francis reflected on the reading from St. Luke’s Gospel, in which the angel appears to Mary, informing her that she is with child.

“And behold, Elizabeth, your relative, has also conceived a son in her old age, and this is the sixth month for her who was called barren; for nothing will be impossible for God,” the angel said.

Elizabeth’s sterility, the pope said, was considered at the time “a divine punishment for her or her husband’s sin” and a sign of shame and guilt “for a sin she did not commit … (she was) made to feel small for being unable to fulfill what was expected of her.”

However, in Elizabeth — who was the first to recognize the child in Mary’s womb — Christians can find a woman who is “fruitful and amazed” upon experiencing in her life “the fulfillment of a promise made by God.”

“In her, we understand that God’s dream is not nor will be sterile or to stigmatize or fill his children with shame, but rather bring forth through and from them a song of blessing,” he said.

This fruitfulness can also be seen in St. Juan Diego, who was chosen by Mary to bear on his “tilma the image of the Virgin.”

Mary, shown “with dark-skin and mestizo appearance,” reflected a “mother capable of taking on the traits of her children to make them feel a part of her blessing,” the pope said.

Our Lady of Guadalupe, he added, remains a symbol of the wealth and cultural diversity of Latin America and the Caribbean that must not only be cultivated, but also defended from every attempt to impose a way of thinking that “makes everything we inherited from our elders invalid or sterile.”

“In short, our fruitfulness requires us to defend our people from an ideological colonization that cancels out the richest thing about them, whether they be indigenous, Afro-American, mestizo, farmer, or suburban,” the pope said.

Pope Francis called on Christians to look to Mary and learn from her, to become a church with a “mestizo appearance, an indigenous appearance” that takes the form of the little ones.

It is “the appearance of a person who is poor, unemployed, of a boy or girl, old or young, so that no one may feel sterile and infertile, so that no one feels ashamed or worthless,” the pope said.

NEXT: In Albania, Franciscans work to heal past wounds through remembrance