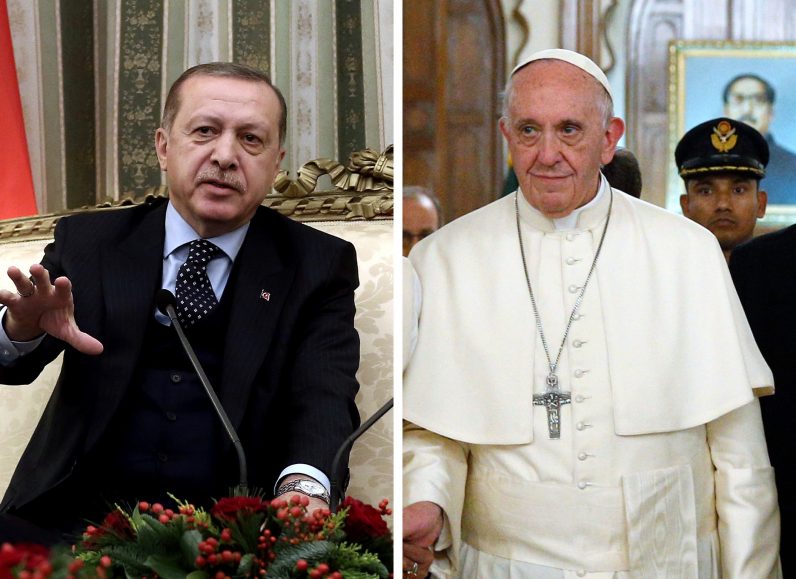 Turkish President Recep Tayyip Erdogan and Pope Francis are seen in this composite photo. They spoke by telephone Dec. 29 about the status of Jerusalem. (CNS composite photo/Paul Haring and Simela Pantzartz, Reuters)

The Turkish newspaper Hurriyet reported that Erdogan and Pope Francis both expressed satisfaction with the U.N. resolution Dec. 21 calling on the United States to rescind its recognition of Jerusalem as the capital of Israel. The resolution passed 128 to 9, with 35 abstentions.

U.S. President Donald Trump announced Dec. 6 that he was formally recognizing Jerusalem as Israel’s capital and ordering the State Department to begin preparations for moving the U.S. embassy from Tel Aviv to Jerusalem.

Hours before Trump made the announcement, Pope Francis publicly appealed for respect for the “status quo” of Jerusalem and prayed that “wisdom and prudence would prevail to avoid adding new elements of tension in a world already shaken and scarred by many cruel conflicts.”

The Vatican supports a “two-state solution” for the Holy Land with independence, recognition and secure borders for both Israel and Palestine. While insisting access must be guaranteed to the holy sites of Christianity, Judaism and Islam in Jerusalem, the Vatican, like most nations around the world, believes political control of the city should be settled in Israeli-Palestinian peace talks.

Before giving his Christmas blessing Dec. 25, Pope Francis again prayed “for peace for Jerusalem and for all the Holy Land.”

He asked the crowd in St. Peter’s Square to join him in praying that “the will to resume dialogue may prevail between the parties and that a negotiated solution can finally be reached, one that would allow the peaceful coexistence of two states within mutually agreed and internationally recognized borders.”

“May the Lord also sustain the efforts of all those in the international community inspired by goodwill to help that afflicted land find — despite grave obstacles — the harmony, justice and security that it has long awaited,” the pope continued.