Prepare way for the Lord with prayer, acts of charity, pope says 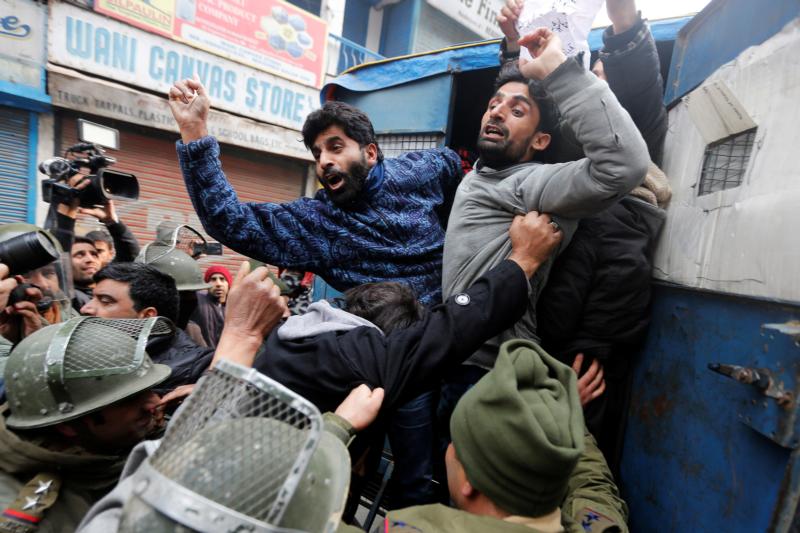 Protesters shout slogans as they are detained by the police during a demonstration to mark U.N. Human Rights Day in Srinagar, India. (CNS photo/Danish Ismail, Reuters)

VATICAN CITY (CNS) — Advent is a time to make a renewed commitment to prayer and to caring for others, Pope Francis said.

“It is a time to recognize the holes to be filled in our lives, to smooth the roughness of pride and make space for Jesus who is coming,” the pope said Dec. 10, the second Sunday of Advent.

Before reciting the Angelus prayer with an estimated 20,000 people gathered in St. Peter’s Square, Pope Francis spoke about the Sunday Mass readings and particularly about the ways in which people today could respond to the prophet Isaiah’s call to prepare the way of the Lord.

Isaiah says “every valley shall be filled in” and “every mountain and hill shall be made low” in preparation for the coming of the savior.

The personal valleys or voids to be filled, the pope said, are “sins of omission,” especially “the fact that we do not pray or pray seldom.”

The other omission, he said, is in taking care of others. Not only does charity alleviate material needs, but it can be an occasion for the giver to be like John the Baptist in “opening paths of hope in the desert of arid hearts.”

The mountains and hills that need to be laid low, he said, are “pride, haughtiness and arrogance,” which fill one’s heart, leaving no room for the Lord.

After the Angelus prayer, Pope Francis reminded the crowd in the square that it was the U.N. Human Rights Day and that members of the International Campaign to Abolish Nuclear Weapons were about to accept the Nobel Peace Prize at a ceremony in Oslo, Norway.

The conferral of the prize on Human Rights Day “underlines the strong tie between human rights and nuclear disarmament,” the pope said. “In fact, working to protect the dignity of all people, particularly the weakest and most disadvantaged, also means working with determination to build a world without nuclear weapons.”

“God gives us the ability to collaborate to build our common home,” he said. “We have the freedom, the intelligence and the ability to guide technology and limit our power in the service of peace and true progress.”

Pope Francis also drew people’s attention to the One Planet Summit, an international gathering of public and private finance experts, to discuss financial support for innovative efforts to fight climate change. The summit was scheduled for Dec. 12 in Paris.

“Two years after the adoption of the Paris Accord on climate,” he said, the summit seeks to consolidate “a shared strategy for fighting the worrying phenomenon of climate change.”

“I deeply hope this summit, as well as other similar initiatives, would promote a clear awareness of the need to adopt truly effective decisions to combat climate change and, at the same time, to combat poverty and promote integral human development,” the pope said.

PREVIOUS: God does not lead us into temptation, Satan does, pope says