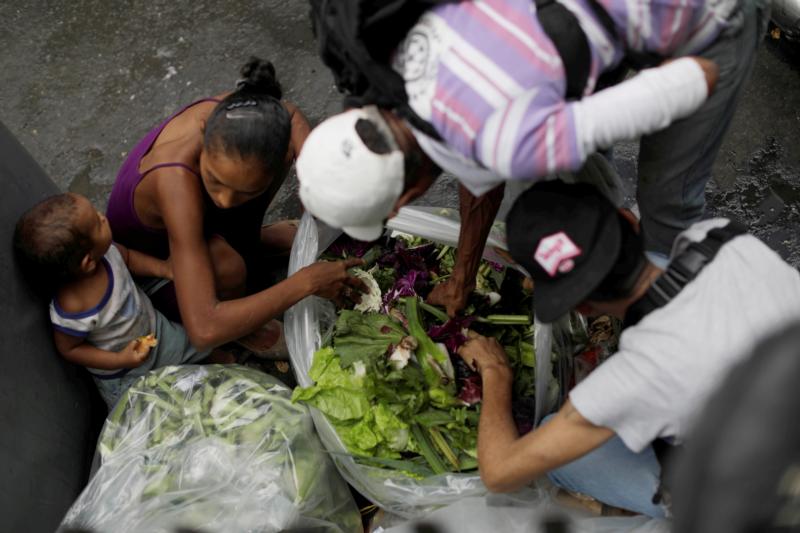 People search for food in garbage bags next to a supermarket in late July in Caracas, Venezuela. (CNS photo/Ueslei Marcelino, Reuters)

BARQUISIMETO, Venezuela (CNS) — Eleven-year-old Alejandro took two sausages from the refrigerator in his home, thinking only of his empty stomach. When his mother, a cleaning woman, returned and realized that Alejandro had eaten what was meant to be dinner for her six children, she shouted at him and beat him. Furious and ashamed, Alejandro went into his room and locked the door. Three hours later, his mother found him dead. He had hanged himself.

Medical Mission Sister Maigualida Riera, 46, is still shaken by the tragedy that occurred in Jesus of Nazareth Parish in Barquisimeto, Venezuela’s fourth-largest city, where she lives. Alejandro’s death is an extreme case of an evil haunting all Venezuelan families these days: hunger.

“People do not have the money to buy enough food,” said Janeth Marquez, coordinator of Caritas Venezuela, the Catholic Church’s aid agency.

Because of hyperinflation, the monthly minimum wage buys just four boxes of eggs. Tomorrow it might be worth even less. The Venezuelan government does not release official figures about food, but surveys by Caritas show that 46 percent of Venezuelans eat less than three meals a day, and 14.5 percent of children under age 5 suffer from acute malnutrition.

Even Caritas workers are hit by the crisis. “Our people leave the country or have to struggle to get food for themselves,” Marquez told Catholic News Service.

Community kitchens are one answer to the food crisis. La Vega, a neighborhood of 120,000 people, lies on the hills surrounding Caracas. The open-air community kitchen has a spectacular view of the city below, but the children sitting around the long table recently paid no attention to the panorama. Their eyes were on the soup that Judith Arcia, 57, was pouring into their plastic cups.

“Today, I prepared a soup with beans, vegetables, potatoes, some sausage,” said Arcia, a tall woman with six children and 11 grandchildren, who oversees the kitchen. “I cannot remember any crisis as hard as this one.”

“It started when we realized that children did not come to school, or that they fainted during class,” recalled Jesuit Father Alfredo Infante, pastor of St. Alberto Hurtado parish in La Vega. That was a year and a half ago. Since then, the parish has operated two community kitchens for 1,200 children in La Vega.

“Despite the crisis, it is a sign of hope that people are still able to organize themselves,” he said.

One of the many contradictions in contemporary Venezuela is that food producers cannot escape the food shortage.

“We used to make our living producing coffee, pasta and jam in the Benedictine tradition,” said Sister Jazmin Ferrer, one of 32 sisters at the Cistercian monastery of Humocaro Alto in a rural area of the state of Lara. The monastery became famous for its pasta.

“We were processing 200 kilograms of wheat flour each week,” Sister Jazmin said, “but we cannot get any ingredients now, and we had to stop the pasta production.” Neither can they find sugar to make jam or the pesticide they need for their coffee bushes. The monastic community now lives mostly from the vegetables and fruits they grow for themselves, and some bananas, corn and beans that they sell.

Some cooperatives produce food for Cecosesola, an umbrella organization in Barquisimeto, the capital of Lara. The roots of the cooperative movement in Lara go back to the 1960s, when Jesuit priests founded the first cooperatives. Cecosesola is now an independent — and unusual — organization. Its 1,400 members organize themselves with no hierarchy. They draw the same salary and rotate in their jobs.

In 22 markets throughout the city, they provide vegetables and groceries to about 25 percent of Barquisimeto’s 2 million residents.

“Our secret is that we do not sell food, but we build trust between producers from the countryside and consumers,” said Gustavo Salas, who has been a member of Cecosesola for 45 years. Because of their grass-roots organization, they can still sell groceries and vegetables at a lower price than most supermarkets.

Cecosesola, which has remained independent of any public subsidies, is now threatened by new tax rules imposed by the city government. Nevertheless, Salas said he is confident the organization will find solutions.

“Our cooperative had been broken many times,” he said. “This crisis is another opportunity for our personal growth.”

PREVIOUS: Prepare way for the Lord with prayer, acts of charity, pope says

NEXT: Christian vocation is to serve life, health, pope says in message