Protests cause uncertainty in Bethlehem, but for now, pilgrims visit 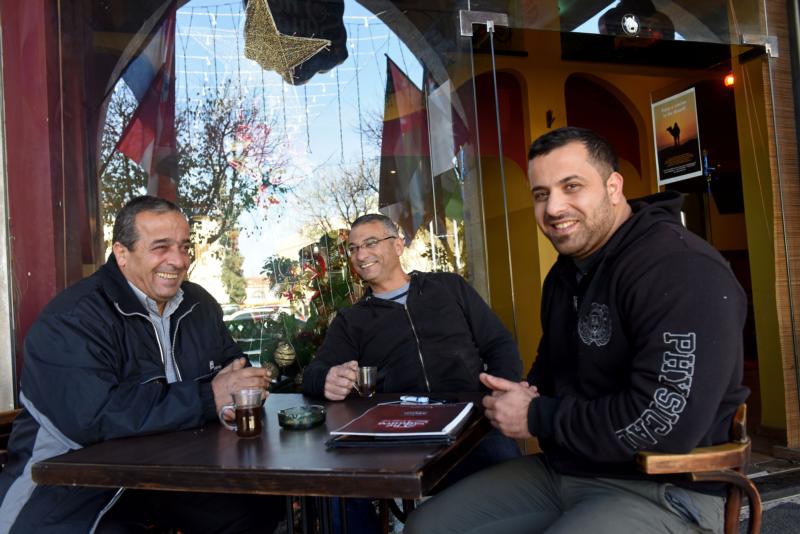 Palestinian Mahmoud Abu Hamad, right, manager of The Square Restaurant in Manger Square, sits with friends outside the restaurant, near the Church of Nativity, Dec. 8 in Bethlehem, West Bank. (CNS photo/CNS photo/Debbie Hill)

BETHLEHEM, West Bank (CNS) — Not far from where journalists lined up for positions outside the guard tower at Rachel’s Tomb in anticipation of confrontations between Israeli soldiers and Palestinians, life in Bethlehem continued. Trendy young Bethlehem residents and visitors were lunching on vegetarian pizza, quinoa and salmon salad, and sandwiches with names like Sexy Morning at the popular Zuwadeh Cafe.

“No benefit will come (of the demonstrations), but people are getting their frustrations out like they have the right to do. It’s the least they can do,” said Mahmoud Hamideh, 25.

“People go and throw stones, but then life goes back to normal,” agreed his cousin, Saleh al-Jundi, 31, who just moved back to Bethlehem from Abu Dhabi with his wife and 14-month-old son. “But this time I am not sure after what Trump said.”

Palestinians leaders called for three days of protests following U.S. President Donald Trump’s Dec. 6 official recognition of Jerusalem as Israel’s capital, and demonstrations have broken out in the West Bank, Jordan and other parts of the Muslim world.

Palestinians reported one killed and at least 35 injured in clashes in the Gaza Strip, with some 115 Palestinians injured in all protests Dec. 8. In Bethlehem, Israeli soldiers fired tear gas and rubber bullets at rock-throwing demonstrators.

Jerusalem is home to holy sites sacred to Christians, Muslims and Jews and is contested as the capital of Israel and a future Palestinian state. The city has been a key point of contention in Israeli-Palestinian peace negotiations, which have been on hold since 2014.

Palestinians say that with his declaration, Trump has removed the United States from the status of neutral mediator.

Though concerned that a continuation of the hostilities may affect the busy Christmas season, shopkeepers and others in the tourism industry in Bethlehem said Dec. 8 that, for now, pilgrims are not canceling reservations.

“But people will be afraid and will think we have a war here,” said 21-year-old Marianna Musallam, who is Greek Orthodox, as she arranged oversized rosaries meant to be hung on the wall. “But we are always in war. Nothing has changed. Trump’s speech was not for good. Jerusalem is for us Palestinians. It is not possible to share.”

Several guests were busy checking messages on their smartphones in the lobby of the Franciscan Casa Nova Guest House, just steps from the Church of the Nativity, and an older couple dropped off their keys on their way out.

“Until now everything is good,” said Issam Matar, who was staffing the reception desk. “But no one knows what will happen in the future.”

Restaurant manager Mahmoud Abu Hamad, 30, a Muslim, said the Catholic owner had told him to close Dec. 7 for a one-day strike called by Palestinian leaders. He said they were not concerned about losing customers over Christmas.

Others, like a Catholic shop owner and a Muslim in the tourism industry, both of whom did not want their names used, said the violence would not help the Palestinian situation.

“If people are smart they would not go out to the streets,” said the Muslim. “With a new conflict, we will lose more kids just because the leaders said to go out into the streets. They should send their own sons, not our sons, who don’t even know what they are fighting for.”

Inside the Church of the Nativity, a large part of which has been cordoned off due to ongoing restoration, pilgrims stood patiently in line, waiting to enter the creche that marks the traditional spot of Jesus’ birth.

Latvian pilgrim Janis Bulisi, 43, said he and his wife had disconnected from the internet since arriving in the Holy Land and had vaguely heard something about Trump’s announcement and the ensuing demonstrations.

“We are here on our pilgrimage. We have felt no tensions. We are just excited to be in the place where Jesus was born,” he said.

“Honestly, I did consider canceling the trip, but after thinking about it I saw the violence was more (in other areas), so I took the chance on still coming, though there is a lot of hesitation, nervousness and uncertainty,” said Daniele Coda, 34, of Italy.

Stella Korsah, 56, said though her group had seen some demonstrators on their way from Jericho to Jerusalem, they had not seen violence.

“I have been waiting for this (pilgrimage) for my entire life and I had the opportunity now,” said Korsah, who is a member of St. Catherine of Genoa Catholic Church in Brooklyn, New York. “I was nervous listening to the news … but I hope for peace … and remember my purpose for coming here. We serve a living God, and I know peace will prevail.”

In the courtyard outside the Church of St. Catherine, a Spanish group from the lay ecclesial movement Communion and Liberation prepared, in song, for their Mass.

“We are here on our pilgrimage. We were a bit worried, but our priest reassured us,” said Cristina Gallego, 53, who directed the singing. “We pray for peace. Christ is here. Here one comes to see, touch and feel their faith.”