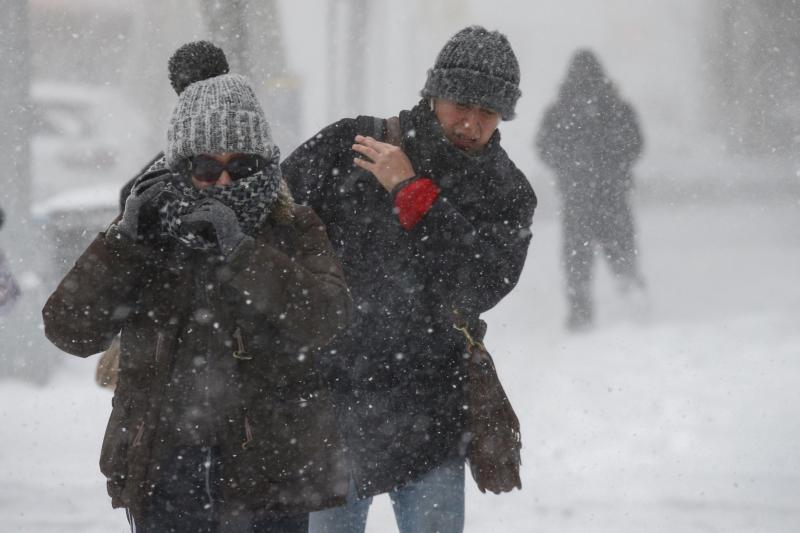 People struggle against wind and snow as they cross a street Jan. 4 in the Brooklyn borough of New York City. (CNS photo/Brendan McDermid, Reuters)

WASHINGTON (CNS) — The brutally cold weather covering the eastern two-thirds of the country at the start of 2018 kept Catholic agencies scurrying to find ways to make sure no one was left without warm shelter and hot meals.

“It literally cuts through you,” Michael Acaldo, executive director of the Council of the Society of St. Vincent de Paul in Baton Rouge, Louisiana, told Catholic News Service Jan. 3.

Temperatures plunged into the 20s in southeastern Louisiana, forcing dozens more people to show up at the three emergency shelters the council operates, Acaldo said. During the cold snap, about 120 men, women and children have been at the shelters. A normal night would see 80 people, he said.

Down the road in New Orleans, the city’s freeze plan allows shelters to expand capacity for several nights until the cold weather subsides.

One of those shelters is the Ozanam Inn, a partner of Catholic Charities of New Orleans. Clarence Adams, executive director, said the shelter has welcomed 30 extra people nightly since the New Year in addition to the 96 on a typical night.

“We’re making the best of it. Everybody’s trying to stay warm,” he said.

Farther north in the Diocese of Little Rock, Arkansas, staff members at Jericho Way, a homeless day resource center operated by the Catholic nonprofit Depaul USA, have seen an increase in clients at their doors.

In the Diocese of Joliet, Illinois, the shelters have been filled for much of December as cold weather settled in early, said Pam Terrell, division director of community services for the diocese’s Catholic Charities program.

She told CNS the agency has established cold shelter nights, allowing more than the usual 80 people to seek warmth during any given evening.

“Both of our shelters serve as warming centers during inclement weather,” Terrell said. “And both have 24-hour call numbers for those who may be searching for cold shelter. So we go over census and take anybody in.”

As some of the coldest temperatures in the country have descended on Minnesota, Tim Marx, president and CEO of Catholic Charities of St. Paul and Minneapolis, said his agency and others in the Twin Cities have been well prepared for whatever Old Man Winter throws their way.

“If we are exceeding capacity at our shelters, we also facilitate people being relocated to a winter safe space” in a county-owned building, Mark said.

In Dayton, Ohio, volunteers with the local Society of St. Vincent de Paul council have seen as many as 400 people show up at the two shelters it operates. Normal winter capacity is 300, said Adam Wik, marketing director for the council.

“More than anything, we just want to make sure we’re there,” he said.

Along the East Coast, communities were dealing with a fast-moving storm centered just off the coast Jan. 4. In Baltimore, hundreds of people turned to the Our Daily Bread Employment Center Hot Meal Program, part of the archdiocese’s Catholic Charities system.

The program has served between 500 and 900 people daily for 37 years and the lines continued to be long despite the single-digit temperatures. About 560 people were served Jan. 2.

Several agency leaders said that they partner with others in their communities to assure that high heating bills will not force people to lose utility service when warmer weather returns in the spring.

Local parish conferences of the Society of St. Vincent de Paul have traditionally helped provide funds for utility payments to avoid shutoffs and many already have begun collecting additional funds in anticipation of higher-than-normal bills for low-income and elderly households.

Contributing to this story were Aprille Hanson of Arkansas Catholic, the newspaper of the Diocese of Little Rock, and Emily Rosenthal of the Catholic Review, the news outlet of the Archdiocese of Baltimore.

PREVIOUS: Sister who was inspiration for ‘The Trouble With Angels’ character dies

NEXT: In op-ed, border bishop pleads for TPS leniency for sake of children