Sister who was inspiration for ‘The Trouble With Angels’ character dies 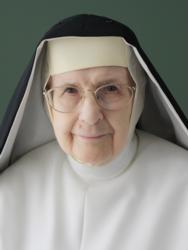 She served as inspiration for the character of Mary Clancy in the book “Life With Mother Superior” by Jane Trahey, which was turned into the movie “The Trouble With Angels,” starring Hayley Mills as Mary Clancy and Rosalind Russell as the mother superior. Trahey was best friends with young Mary Courtney when both were students at Providence High School in Chicago.

Also featured as a nun in the movie’s fictional convent was Marge Redmond, who parlayed the role into a two-season stint as Sister Jacqueline in the television series “The Flying Nun.”

Sister Courtney was born Sept. 26, 1922, in Chicago, the daughter of Harvey and Josephine Ogden Courtney. She made her first profession in 1949 and took final vows in 1952.

Primarily involved in teaching ministry — including 30 years of high school English — Sister Courtney taught at schools in the archdioceses of Chicago; Milwaukee; St. Paul and Minneapolis; and Omaha, Nebraska. She also taught in the dioceses of Nashville, Tennessee; Peoria and Rockford, Illinois; Helena, Montana; Arlington, Virginia; and Owensboro, Kentucky.

In addition, Sister Courtney worked in pastoral ministry and as a community organizer, prison visitor and librarian. Her last assignment before retiring from active ministry in 1993 was serving in the Sinsinawa Dominicans’ motherhouse in the transportation department.