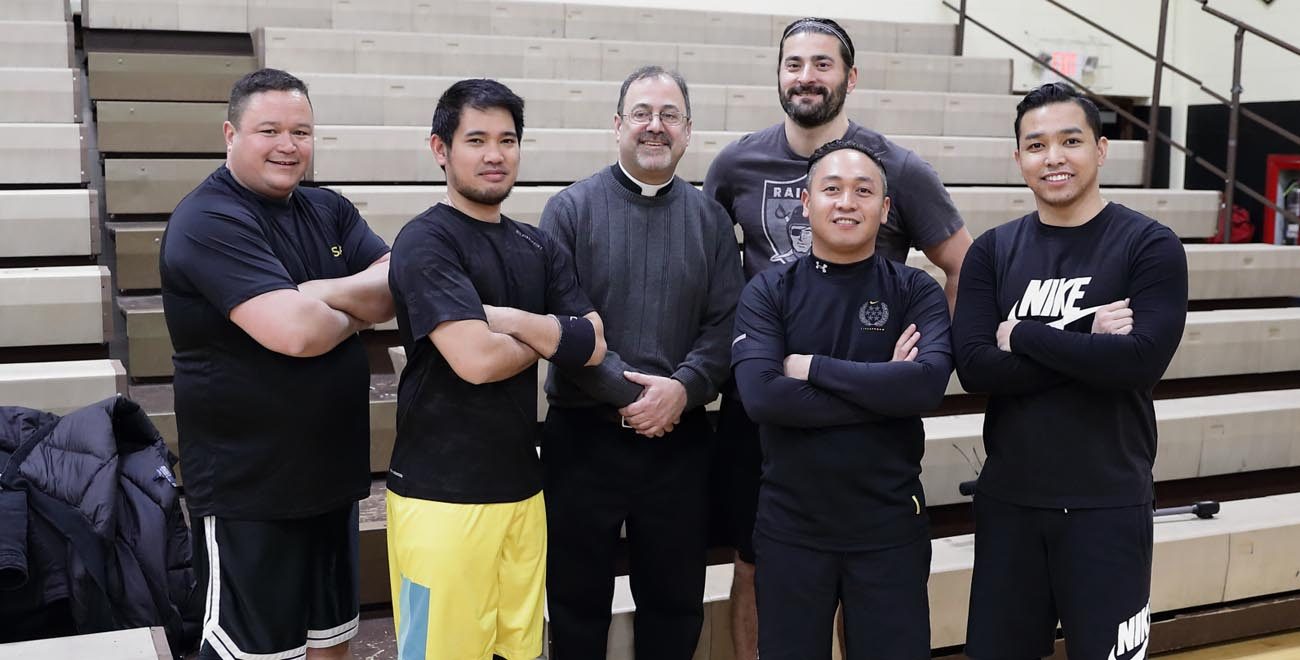 Along with taking a Friday afternoon to enjoy a high school pep rally and shoot some hoops, these priests made it their mission in December to convey the message about the priesthood to St. John Vianney High School students in Holmdel, N.J.. From left are Father Michael Wallack, Father John Michael Patilla, Father Thomas Vala, Father Dean Gaudio, Father Augusto Gamalo and Father Gregg Leo Abadilla. (CNS photo/John Blaine)

But they were completely taken by surprise during the pre-Christmas celebration when six priests ran out onto the basketball court for a friendly exhibition game — all with the intention to teach about vocations.

The basketball game was a way “to reach out and let them know that priests are approachable and they, too, can enjoy hobbies,” said Father Michael Wallack, priest secretary to Bishop David M. O’Connell of Trenton and diocesan director of vocations.

He said he hoped that through the game, the message was conveyed that priests “don’t always just stay in the church all week, waiting for Sunday.”

“Most people don’t really know what a priest does during the week besides writing a homily,” said Father Wallack, who was joined on the court by Father John Michael Patilla, parochial vicar of St. Benedict Parish, in Holmdel and chaplain in St. John Vianney High School; Father Augusto Gamalo, parochial vicar of St. Gregory the Great Parish in Hamilton Square; Father Thomas Vala and Father Gregg Abadilla, pastor and parochial vicar, respectively, of St. Clement Parish in Matawan; and Father Dean Gaudio, pastor of St. Elizabeth of Hungary Parish in Avon-by-the-Sea.

It didn’t take long before the game between the St. John Vianney Lancers and the priests, who called themselves God Squad II, went from being a friendly game of hoops to a competitive match that resulted in a 4-2 win for high schoolers. The diocesan communications staff produced a video of the game.

Also evident in the video and in comments following the game was the strong camaraderie between the priests as they reflected on how basketball could serve as an effective vocation recruitment tool.

“Sports is a good avenue to promote vocations and meet kids where they are at,” Father Patilla said.

Afteward, Father Vala, who smiled when he said he lasted longer than he thought he would in the game, thought the “kids got a kick out of it.”

The priests enjoyed sharing a bit on how they prepared for the game with Father Gamalo saying “there’s some prayers involved,” especially because the priests did not have the opportunity to practice beforehand. Listening to upbeat music and watching games on television helped to motivate Father Gamalo and Father Abadilla give their all to the game.

Father Gaudio smiled as he shared how he thought the goal of the game was to show students that priests “are not all 70 years old” and can be everyday men who like sports.

“I would like to think there was a young man in today’s crowd who might be thinking of a vocation to the priesthood, and our appearance at the game got him thinking about it even more,” said Father Gaudio, who used to play basketball for Bound Brook High School and on an intramural team in St. Bonaventure University.

Father Vala said he hoped that through activities such as sports or music, the students can get to know a priest and share a friendship with him. And through that friendship, he hoped students would feel comfortable approaching a priest when thinking about the priesthood as a vocation.

“The priesthood is a vocation to serve God, and in doing so, you touch the lives of others when you reach out to them and make a positive difference in their lives,” he said.

“When I embraced my Catholic faith in a serious and responsible way, I found meaning and purpose,” he added, saying that being a priest has “brought me the joy and happiness that I sought in my life.”

After the game, James Guilbert, a senior and varsity basketball player at the high school, said he thought the game allowed the St. John Vianney community to “see a different aspect of priests lives and that they live normal lives, too.”

Stadnyk is associate editor of and Fisher writes for The Monitor, newspaper of the Diocese of Trenton, New Jersey.

NEXT: Supreme Court sends death-row case back to lower courts