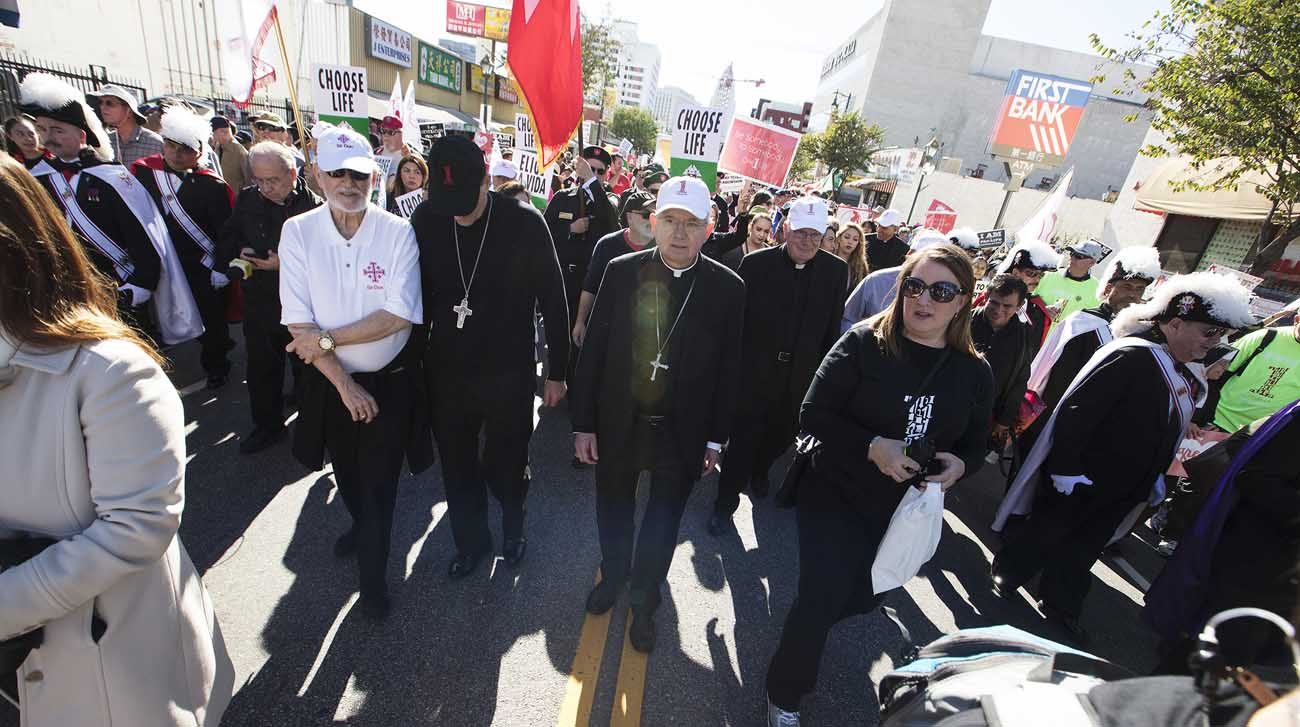 Archbishop Jose H. Gomez of Los Angeles walks with others during the Jan. 20 OneLife LA rally in Los Angeles. The event was one of many held across the country to mark the Jan. 22 anniversary of the U.S. Supreme Court's decision legalizing abortion. (CNS photo/Victor Aleman, Angelus News)

LOS ANGELES (CNS) — Los Angeles Archbishop Jose H. Gomez told the thousands gathered for a rally for life that God loves all of his sons and daughters “with a personal love … a love that created each one of us.”

The crowd gathered for the fourth annual OneLife LA Jan. 20 at Los Angeles State Historic Park in downtown Los Angeles to celebrate “the beauty and dignity of every human life from conception to natural death.”

“OneLife LA is one of the most beautiful events in America. It is just a wonderful day when we celebrate the reality that God is our Creator who loves us,” Archbishop Gomez said.

“In God’s eyes, we are his children — all of us sons and daughters that he loves with a personal love,” he said. “A love that knows our names. A love that created each one of us, and knows all the desires in our hearts.”

The event kicked off at noon at the city’s birthplace, La Placita Olvera, with a welcome from Archbishop Gomez. The archbishop and the archdiocese’s auxiliary bishops led the walk to the historic park for the official program and celebration.

Also addressed the cheering crowd was Bishop Charles Blake, pastor of the West Angeles Church and presiding bishop of the Church of God in Christ, which has 6 million members worldwide.

For the fourth consecutive year, Patricia Heaton, an Emmy Award-winning actress and longtime pro-life advocate, introduced keynote speaker Karen Gaffney, the first person with Down syndrome to swim the English Channel. She is an advocate for the inclusion of people with physical disadvantages in families, the workplace and schools.

“I love the fact that so many of these diverse groups can all get together and support each other,” Heaton said in an interview before OneLife.

It also is important “to look around and see how much support there is from all kinds of people. Everybody has a stake in this,” she told Angelus News, the Los Angeles archdiocesan news outlet.

Speaker Jose Arellano shared his story about escaping gang violence and helping others do the same. He leads trainees at Homeboy Industries, a gang intervention program in Los Angeles founded by Jesuit Father Greg Boyle.

At an early age, Arellano excelled in school, being part of the gifted and talented education program, but eventually he followed on the footsteps of family members involved in gang culture. At age 12, he became a gang member, and at 15, he landed in juvenile hall and then prison.

Today, he helps former gang members, like himself, to fill out job applications, or connects them with services or simply offers them hope to persevere and turn their lives around, as he did.

The event was emceed by Myrka Dellanos, a two-time Emmy-Award winning broadcast journalist, who is an international speaker on marriage, family and adoption. Dellanos is the founder of Missions Reaching Out Compassionately, which serves underprivileged women and children in South Florida and Latin America. She was joined as emcee by Damon Clarke Owens, founder and executive director of JoyToB, a ministry centered on St. John Paul II’s “theology of the body.”

Performers included Yesenia Flores, a longtime humanitarian serving the homeless, foster care children and youth in Southern California. She became a leading Spanish-language Catholic speaker and musician after years of a successful career as a Ranchero singer. “Ranchero” is a genre of the traditional music of Mexico.

Others on stage included singer and songwriter Jodi King and her husband, bassist Chris Rademaker, known as the duo Love & the Outcome, and YouTube stars Angelica Gallegos and Jose Esparza, who performed a song that they wrote specifically for OneLife LA. The Conjunto Nacional Salsa Band closed the event.

“OneLife LA, from the beginning, has been about far more than a daylong event,” said Kathleen Buckley-Domingo, director of the archdiocese’s Office of Life, Justice and Peace.

“It is meant to encourage people to look around with new eyes at their brothers and sisters in Southern California, and to find practical, life-affirming ways that each one of us can help those in need every day,” she said in a statement. “I am so thankful to our community partners who signed up thousands of volunteers for service that will continue all year. A culture of life will not be built with good wishes alone.”

Buckley-Domingo added: “We’ve got to do the hard work. And, that means taking the spirit of OneLife LA and letting it saturate every other day of the year so that defending the voiceless, embracing those in need, and proclaiming the beauty of our lives becomes a daily experience.”

According to the archdiocese, OneLife LA partners with local community service and outreach organizations that provide support to pregnant women; assist the homeless, survivors of trafficking, the elderly, the disabled and the dying; and help foster children find adoptive families.

NEXT: Bishops consider plans to revitalize appeal of a Catholic education