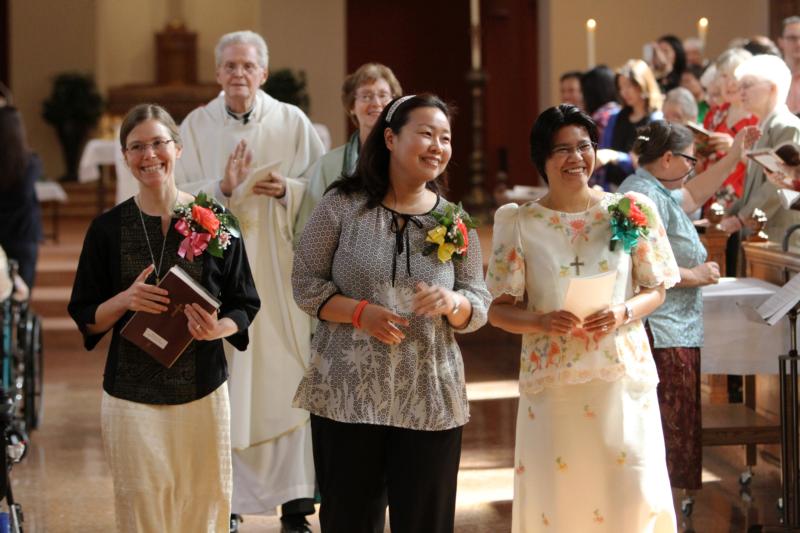 Maryknoll Sisters Julia Shideler, Anastasia Lee and Abby Avelino smile as they process from the chapel in 2014 after professing their final vows during Mass at the Maryknoll Sisters Center in Maryknoll, N.Y. Consecrated men and women reflect the light of Christ and are witnesses to that light “in a world that is often shrouded in shadow,” Cardinal Joseph W. Tobin of Newark, N.J., said Jan. 29. (CNS photo/Gregory A. Shemitz)

WASHINGTON (CNS) — Consecrated men and women reflect the light of Christ and are witnesses to that light “in a world that is often shrouded in shadow,” Cardinal Joseph W. Tobin of Newark, New Jersey, said Jan. 29.

“They are the glory of God’s people. We pray for the perseverance of consecrated men and women and ask God to continue enriching the church with their unique vocation,” he said in a statement as the chairman of the U.S. Conference of Catholic Bishops’ Committee on Clergy, Consecrated Life and Vocations.

Cardinal Tobin’s statement came in advance of the annual celebration of World Day for Consecrated Life Feb. 2, the feast of the Presentation of the Lord. It will be celebrated in parishes the weekend of Feb. 3-4.

The feast of the Presentation also is known as Candlemas Day, when candles are blessed to symbolize Christ as the light of the world. St. John Paul II instituted the day of prayer for women and men in consecrated life in 1997.

With his statement, the committee headed by Cardinal Tobin also released the results of a survey of women and men religious who professed perpetual vows in 2017 in a religious congregation, province or monastery based in the United States.

The survey was conducted by the Center for Applied Research in the Apostolate, based at Georgetown University in Washington.

Among the major findings were:

CARA asked the 768 religious institutes, provinces or monasteries that are in the United States to provide the names of women religious or religious brothers and priests who professed or were planning to profess perpetual vows in 2017. The institutes, provinces, etc. were identified by the Leadership Conference of Women Religious, the Council of Major Superiors of Women Religious, the Conference of Major Superiors of Men or the USCCB Secretariat of Clergy, Consecrated Life and Vocations.

A total of 600 major superiors responded, or 78 percent, with the names of 208 men and women religious. Of that number, 100 sisters and nuns and 51 brothers and priests responded — representing a response rate of 73 percent.

Other survey findings include:

— Nearly nine in 10 of the responding religious, or 88 percent, have been Catholic since birth. More than three-quarters — 77 percent — come from families in which both parents are Catholic. Among the 12 percent of respondents who became Catholic later in life, the average age at which they did so was 22.

— Most religious did not report that educational debt delayed their application for entrance to their institute. Among the 4 percent who did report having educational debt, however, they averaged about four years of delay while they paid down an average of $29,100 in educational debt.

— Nearly all of the responding religious, 88 percent, participated in some type of vocation program or experience prior to entering their religious institute.

PREVIOUS: Ahead of Super Bowl, Catholics partner to ramp up anti-trafficking efforts

NEXT: Ignatian network to mark Valentine’s Day with a focus on migrants