Ahead of Super Bowl, Catholics partner to ramp up anti-trafficking efforts 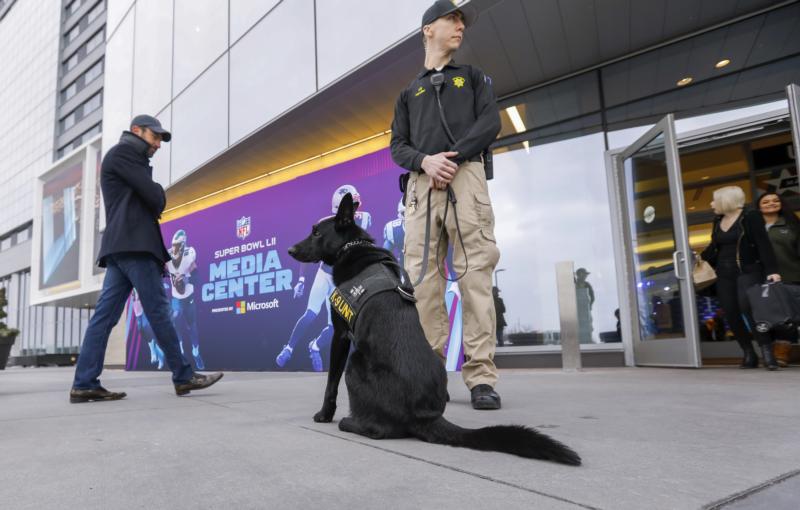 A security officer with a dog from the K-9 unit stands watch Jan. 28 outside the Mall of America in Bloomington, Minn., site of the media center for Super Bowl LII. The NFC champions, the Philadelphia Eagles, and the AFC champions, the New England Patriots, will compete in Super Bowl LII Feb. 4 at U.S. Bank Stadium in Minneapolis. (CNS photo/Erik S. Lesser, EPA)

ST. PAUL, Minn. (CNS) — For Terry Forliti, a series of traumatic events as a teenager — being raped by her boss, her friend dying in a car accident and her parents divorcing — spurred heavy drug use that carried into adulthood.

But Forliti was able to function — up until her own divorce, being laid off from her job with a health care company and losing her home. An admitted alcoholic, she also lost custody of her two children. She saw her support system crumble, along with her self-worth. And when she sought treatment, her takeaway wasn’t recovery, but rather learning where to get more drugs.

People who profit from selling others for sex are trained to spot and aggravate their victims’ vulnerabilities. Ultimately, one perpetrator spotted Forliti’s. Thus began her life on the street at age 38, segueing into becoming a victim of sex trafficking.

“This didn’t just fall on my lap, and it doesn’t just fall on anyone’s lap,” said Forliti, 56. She is now executive director of Breaking Free, a survivor-led organization in the Twin Cities dedicated to helping victims of sex trafficking and other violent crimes.

In the 10 days surrounding the Super Bowl in Minneapolis Feb. 4, Forliti and others from Breaking Free are taking to the streets, reaching out to women with hygiene items, food and directions to Breaking Free’s emergency shelter.

“We’re hoping we get that opportunity to give our testimony to these women,” Forliti told The Catholic Spirit, newspaper of the Archdiocese of St. Paul and Minneapolis. “We’re not social workers, and we don’t have degrees. We’re miracles, and they are, too.”

Law enforcement officials expect an uptick in trafficking during the Super Bowl — mostly through online advertising — but Forliti said there aren’t a lot of numbers to quantify. During recent Super Bowls, officials have reported a 40 percent increase in the number of advertisements placed on popular websites selling sex, Forliti said. She added that local pimps are likely making calls to pimps from other cities, encouraging them to venture onto Twin Cities turf.

Forliti, a Catholic, explains how girls and women often become victims. Many are sexually abused at home from a young age. Family members might know of the abuse, but they often fear losing financial stability, or their lives, so the abuse continues. Girls frequently run away when they can, often around age 13.

“In the first 48 hours, they’re more likely to get picked up by a perpetrator than they are by law enforcement or social services,” Forliti said.

After being picked up, pimps will schmooze and brainwash their victims, “pitting everyone in the world against them,” Forliti explained. This recruitment strategy, she said, is part of the pimps’ control, which opens the door to initiation into the life of a sex-trafficking victim. Forliti said within the first moments of a victim’s first sexual encounter, she can be sodomized, beaten, repeatedly raped, defecated on and photographed.

“And she is going to be so broken by the end of this experience that she can’t ever function as a normal human being after that,” Forliti said. “It’s called being ‘turned out,’ and every girl remembers when they were ‘turned out.'”

Sisters of St. Joseph of Carondelet, Benedictine sisters, Franciscan sisters and School Sisters of Notre Dame have been speaking at parishes and collecting money to help prepare Breaking Free’s emergency shelter for victims who are rescued during the Super Bowl.

The sisters also have purchased supplies including gift cards, bedding, towels and warm clothing — some of which the sisters hand-knitted — which they brought to Breaking Free. A Benedictine sister plans to offer her services as a therapist at the emergency shelter.

Sister Ann Redmond, 84, was invited to join an official Super Bowl committee of faith-based leaders about four months ago. Since 2002, the Sister of St. Joseph of Carondelet has chaired her religious community’s Anti-Human Trafficking Working Group. She draws on Catholic social teaching in her presentations at parishes.

“Parishes have always been positive and want to do what they can,” she said. “I think we’re all concerned about individuals seeing the possibilities of their lives as God has created them. Then when you hear about young people being lured into trafficking, it negates everything of that. So, once people start thinking about it, they become passionate, too. We’re looking at the Super Bowl as a time of educating people about trafficking. … It’s part of the conscience of the rest of us.”

Auxiliary Bishop Andrew H. Cozzens of St. Paul and Minneapolis said he learned how much the problem is “out of control” in the Twin Cities, even before the Super Bowl, saying that law enforcement needs the church community to educate people and help bring an end to sex trafficking.

Forliti said Breaking Free’s greatest supporters are Catholic organizations, from parishes and schools inviting survivors to speak to classes to the work of the sisters’ year-round anti-trafficking efforts to Catholic Charities of St. Paul and Minneapolis providing services to the homeless.

Regarding sex trafficking, Bishop Cozzens points to “the beauty and importance of the Catholic Church’s teaching on chastity” amid the “sickness that has affected our society since the sexual revolution.” He said the church can find ways to help people live virtuously.

For Forliti, law enforcement and religious communities, the work will continue after the big game.

“On (Feb.) 5th, there will be a whole new group of people (victims) who aren’t Super Bowl-related,” Forliti, said. “This is what we do all day, every day.”

Tyrgstad is assistant editor of The Catholic Spirit, newspaper of the Archdiocese of St. Paul and Minneapolis.

NEXT: Men and women religious called ‘witnesses’ to light of Christ in world