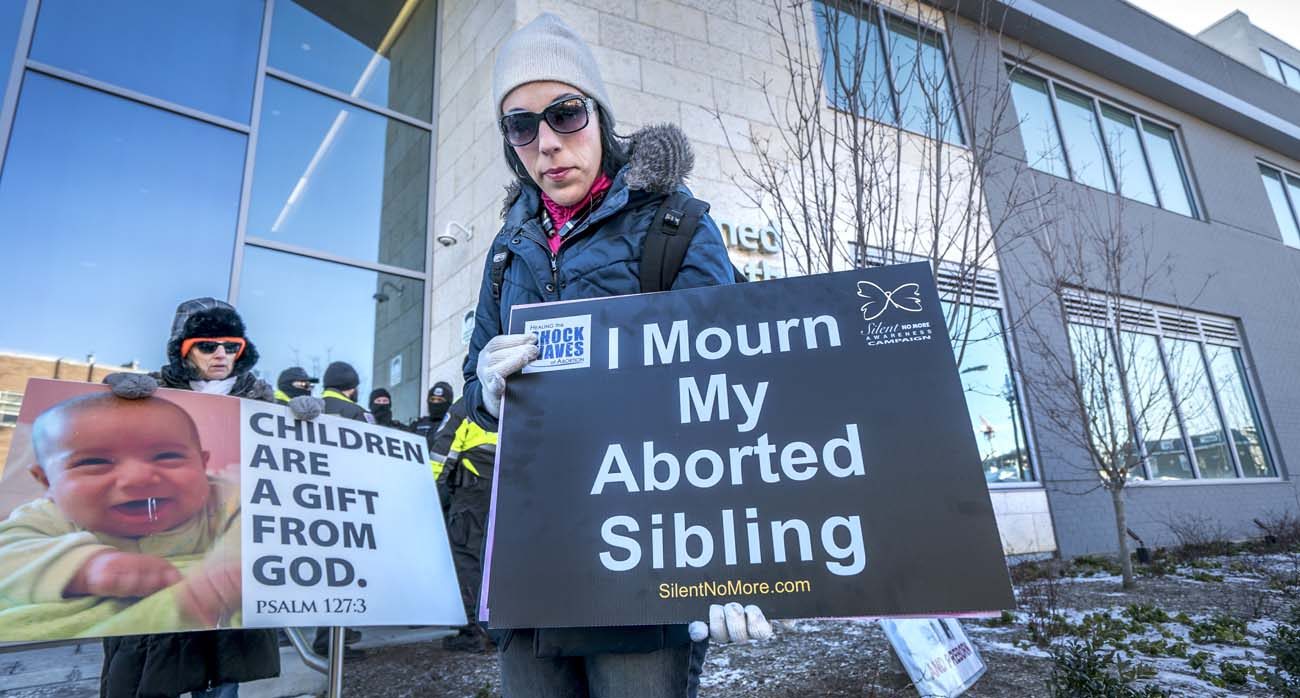 Christina Garza, who still mourns her sister's death through a late-term abortion, joins a protest Jan. 18 outside a Planned Parenthood facility in Washington. Garza and her mother, as well as her husband, have become all pro-life advocates with Silent No More. (CNS photo/CNS photo/Lisa Johnston, St. Louis Review)

WASHINGTON (CNS) — Yoi Reyes believes that her son should not have to pay for a crime that was committed by another.

Years ago as a teenager, Reyes was raped by her stepfather in her native Cuba. The first time, she was 13 and forced to have an abortion. The second time, the baby was too far along, and the doctor refused to do the abortion. Now her son, Pedro, is 27 and he welcomed his first child into the world on Thanksgiving Day.

“God brings things together for those who love him,” said Reyes, who started Mary’s Pregnancy Resource Center in Fort Lauderdale, Florida, seven years ago. “My child shouldn’t pay for the crime he didn’t commit. My son is no less of a human because of the circumstances of his birth. I say 100 percent pro-life, no exceptions, no compromises.”

On Jan. 18, the day before the March for Life, Reyes joined more than 200 people outside of Planned Parenthood’s headquarters in Washington to show real-life examples of abortion. Priests for Life hosted the event.

“We have to make sure that the abortion debate and the purpose of these marches does not become too abstract,” said Priests for Life founder Father Frank Pavone. “The issue will be won the more concrete it becomes — which means specific babies are being killed at specific places at specific times. By bringing people here and focusing on what’s happening in this place makes the event tomorrow all the more meaningful.”

After several women shared their personal stories of abortion, Priests for Life executive director Janet Morana urged the crowd to take those stories home and share them in their communities.

“Everyone standing here must know someone who thinks they’re pro-choice,” said Morana, co-founder of the Silent No More Awareness Campaign. “Your job, your mission here is to have those conversations with your circle of influence.”

As she stood in front of Planned Parenthood in prayer, Savannah Madden watched the clinic escorts as they walked women inside. Earlier that morning, she saw a woman going into the clinic, who then changed her mind and turned around.

Madden, who was with three dozen other students from Hackett Catholic Prep High School in Kalamazoo, Michigan, said those are small victories that keep her going. “There is hope in that,” she said. “That’s why I keep marching.”

Members of the LifeSquad team from Coalition for Life St. Louis also were among the crowd. The program provides outreach to high school and college-age youths, including through the 40 Days for Life campaign, to keep them involved in the pro-life movement throughout the year.

As he handed out #LifeSquad stickers to the crowd, student outreach coordinator Brad Baumgarten noted that it’s imperative that young people are given an outlet at home to continue the energy they experience at the March for Life.

“We look at the pro-life movement in St. Louis and see that we have something very special,” Baumgarten told the St. Louis Review, the archdiocesan newspaper. “Once the teens get back from D.C., they have so much energy and get so fired up. The voice of the youth is so very powerful. Once they can make a stand against abortion, then their generation will follow.”