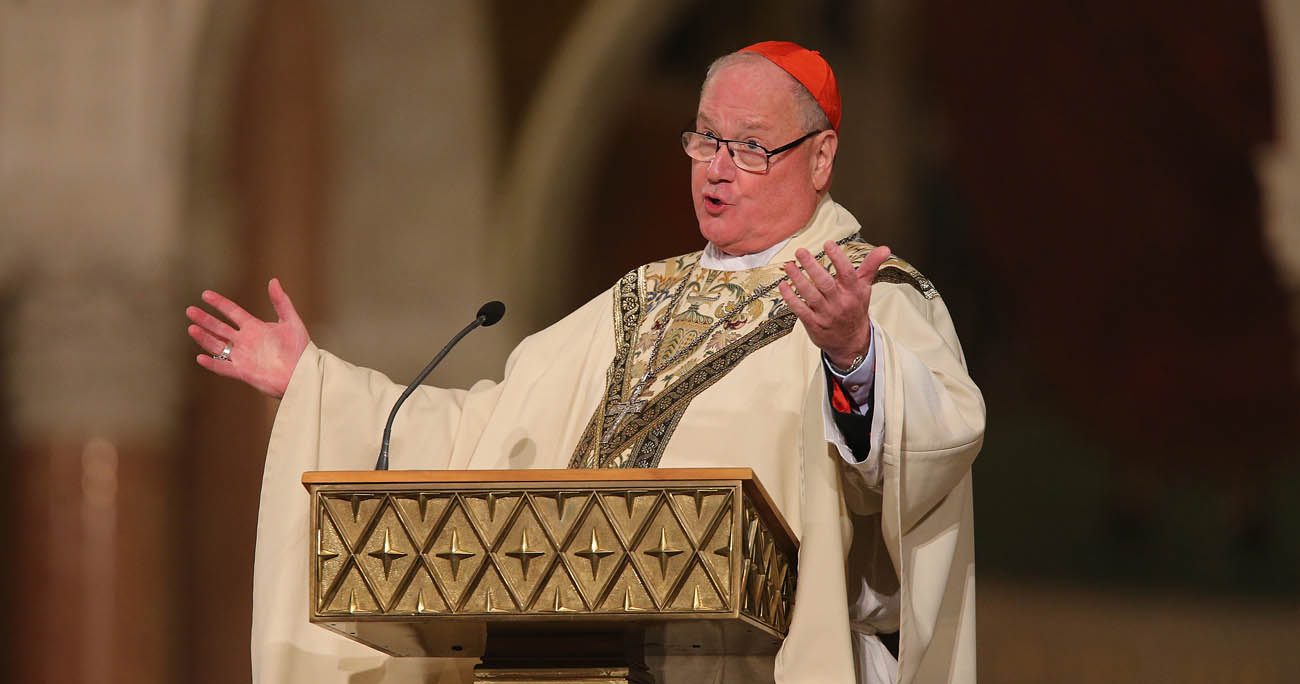 New York Cardinal Timothy M. Dolan, chairman of the U.S. bishops' Committee on Pro-Life Activities, delivers the homily during the opening Mass of the National Prayer Vigil for Life at the Basilica of the National Shrine of the Immaculate Conception Jan. 18 in Washington. (CNS photo/Bob Roller)

WASHINGTON (CNS) — The Rev. Martin Luther King Jr. was invoked by Cardinal Timothy M. Dolan of New York in the cardinal’s homily during the Jan. 18 Mass that opened the National Prayer Vigil for Life.

Like “Pastor King,” as Cardinal Dolan referred to him throughout his homily, “our belief in the dignity of the human person and the sacredness of all human life propels us to concern for human life wherever, whenever, and however it is threatened, from racial antagonism to justice for immigrants, from the war-torn to the hungry,” the prelate said.

And, like Rev. King, whose life was the subject of a national holiday three days prior, “our prayers and witness are about civil rights: the civil right to life and to equal protection under the law, guaranteed by our Constitution, for the most fragile, marginalized and threatened — the tiny, innocent baby in the womb,” Cardinal Dolan said.

The Mass, which has attracted more than 10,000 in recent years, was celebrated at the Basilica of the National Shrine of the Immaculate Conception in Washington.

Rev. King “would be marching with us in the defense of unborn life were not the dignity of his own person and the sanctity of his own life tragically violated 50 years ago this spring,” Cardinal Dolan said, referring to the civil rights figure’s assassination in Memphis, Tennessee, April 4, 1968.

“Pastor King would often begin his stirring speeches, which still move us, by asking his listeners, ‘Why are we here?'” Cardinal Dolan said.

Answering the question himself, the cardinal gave a variety of reasons.

“We are here to advocate and give witness, to advocate for those who cannot yet speak or walk with us, the pre-born baby, whose future is in jeopardy and can be ended by a so-called choice, and to give witness that millions, mostly young people, share a passion for the belief that that little baby has civil rights,” he said. 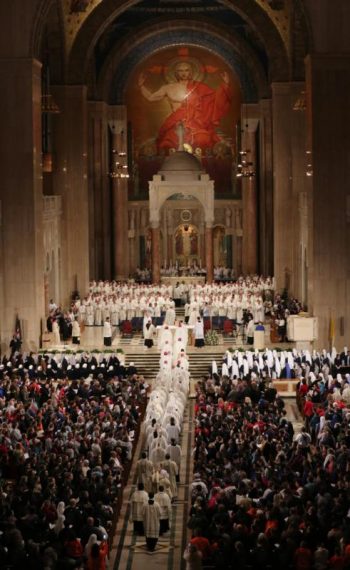 Clergy process at the opening Mass of the National Prayer Vigil for Life at the Basilica of the National Shrine of the Immaculate Conception Jan. 18 in Washington. (CNS photo/Bob Roller)

“We are here to fight the heavy temptation — we must admit the temptation — to discouragement,” he continued.

Another reason, he said, was “to lobby for life,” sharing “passion for a society to assist and protect all vulnerable life … because, to borrow my brother pastor’s refrain, ‘We shall overcome,'” to which the Mass crowd applauded.

“And there is one final reason why we are here,” Cardinal Dolan said. “To pray!”

The opening Mass featured more than 300 clergy concelebrants, including 34 bishops and archbishops, and six U.S. cardinals. Retired Cardinal Theodore E. McCarrick of Washington did not join in the processions, but instead got to the shrine’s sanctuary a few minutes before Mass with the aid of a walker.

While Washington has not been immune to wintry weather for the overnight vigil and next-day March for Life in recent years, this year’s events were met with relatively mild temperatures compared to the frigid and slick conditions north, west and — surprisingly — south of the nation’s capital.

At the Jan. 19 morning Mass that closed the vigil, Bishop Edward M. Burns of Dallas told the story of a young boy who saw an online advertisement for a baseball glove. Wanting the glove but not having the money to pay for it, he wrote a letter to his mother that took the form of an itemized bill for the chores he did around the house — with the total equaling the cost of the glove.

Knowing his mother must have seen the envelope addressed to her at her place at the dining room table, the boy, a few days later, saw a box at his own place at the table. In the box was the glove he had wanted. But as he was trying it on, he spotted an envelope addressed to him at the bottom of the box. In the letter was his mother’s list of services rendered to him — giving birth to him, changing his diapers, tucking him in at night, drying his tears, bandaging his wounds and holding him tight — and after each entry came the words “no charge.”

In echoing the Mass theme “For the Preservation of Peace and Justice,” Bishop Burns recalled the words of Deuteronomy 30: “I set before you a choice: death of life. Choose life so that you may live.”

“Choosing life comes from a sacrificial love,” Bishop Burns said. “We are here to bring attention to the attacks against human life.” He told worshippers, “Stay strong, stay dedicated and committed to the cause of life.”

NEXT: Thousands of youth gather to rally, pray before March for Life