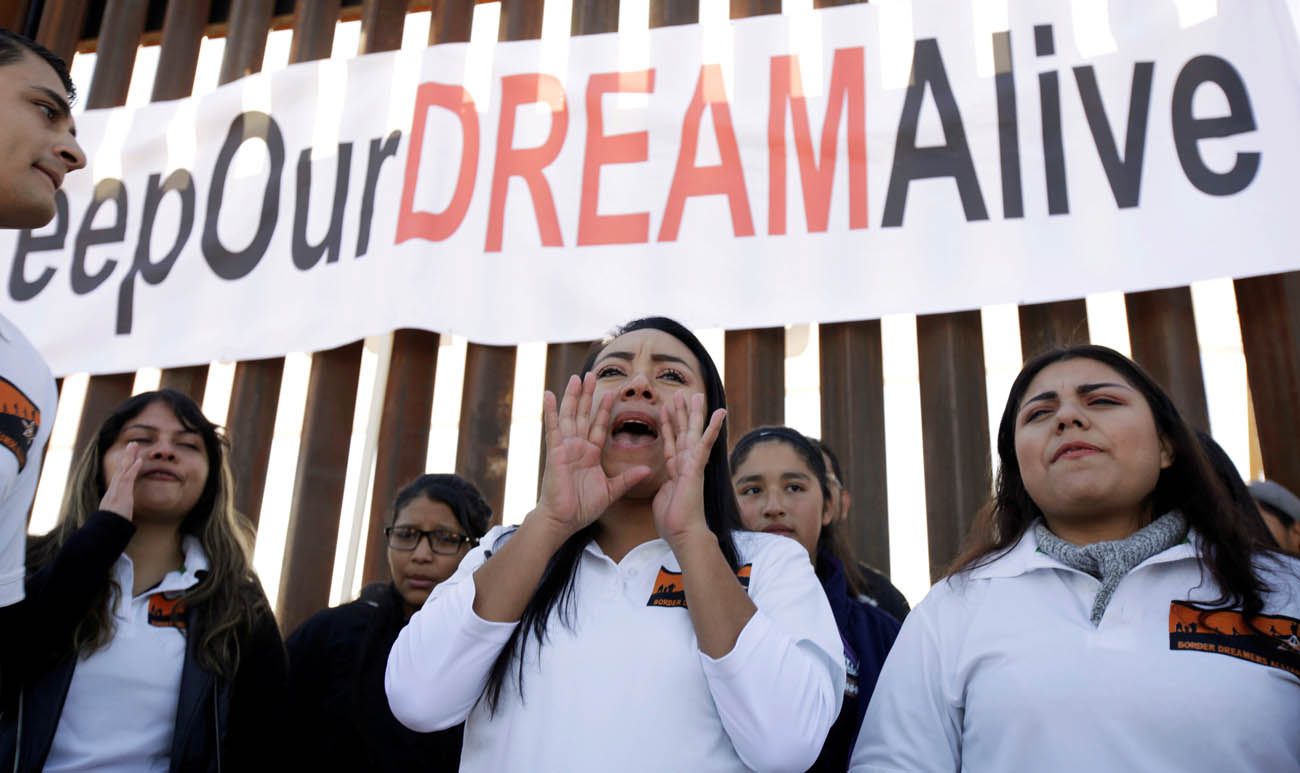 Beneficiaries of the federal Deferred Action for Childhood Arrivals program attend the "Keep Our Dream Alive" binational meeting in 2017. The Dreamers, as DACA recipients are known, gathered at a section of the U.S.-Mexico border wall in Sunland Park, N.M. (CNS photo/Jose Luis Gonzalez, Reuters)

WASHINGTON (CNS) — The chairman of the U.S. bishops’ migration committee said Jan. 30 that the Catholic bishops welcomed the Trump administration’s proposal to give “Dreamers” a path to citizenship, but at the same time, they are “deeply troubled” about the plan’s “impact on family unity.”

On Jan. 26, the White House released a proposal offering a path to citizenship for approximately 1.8 million of the so-called Dreamers and asking for a $25 billion investment in a border wall and other security measures. The plan also calls for an end to the diversity visa program, popularly known as the “visa lottery,” and also a program that grants visa preferences to relatives of U.S. citizens or residents.

The administration said its focus for immigration policy is to keep the “nuclear family” intact.

“We welcome the administration’s proposal to include a path to citizenship for Dreamers. However, the proposed cuts to family immigration and elimination of protections to unaccompanied children are deeply troubling,” said Bishop Joe S. Vasquez of Austin, Texas, who is chairman of the U.S. Conference of Catholic Bishops’ Committee on Migration.

He made the comments in a statement released ahead of President Donald Trump’s State of the Union speech, to be delivered at 9 p.m. Eastern time. Immigration and border security were among the topics Trump was expected to address in the speech, in addition to the economy, tax reform and the country’s infrastructure needs.

“Family immigration is part of the bedrock of our country and of our church,” Bishop Vasquez said. “Pope Francis states: ‘The family is the foundation of coexistence and a remedy against social fragmentation.’ Upholding and protecting the family unit, regardless of its national origins, is vital to our faith.”

In September, Trump ended the Obama-era Deferred Action for Childhood Arrivals program, known as DACA, and he called on Congress to pass a measure to preserve the program. The DACA recipients are called Dreamers, who are immigrants brought to the U.S. illegally as children by their parents. Under DACA, they are protected from deportation, but they have to apply to the program and meet certain criteria.

DACA ends March 5, unless Congress passes a bill to keep the almost 6-year-old program in place.

“In searching for a solution for Dreamers, we must not turn our backs on the vulnerable,” Bishop Vasquez said in his statement. “We should not, for example, barter the well-being of unaccompanied children for the well-being of the Dreamers. We know them all to be children of God who need our compassion and mercy.

The U.S. bishops “urge a bipartisan solution forward that is narrowly tailored” to keep DACA in place, the bishop said. “Time is of the essence. Every day we experience the human consequences of delayed action in the form of young people losing their livelihood and their hope.

“As pastors and leaders of the church, we see this fear and sadness in our parishes and as such, continue to call for immediate action,” Bishop Vasquez added. “Elected officials must show leadership to quickly enact legislation that provides for our security and is humane, proportionate and just.”

The Trump administration’s proposal to provide a path to citizenship for approximately 1.8 million Dreamers includes those currently covered by the program and more than 1 million who meet the DACA criteria but have not signed up.

PREVIOUS: Encuentro delegates urged to bring others to ‘new encounter’ with Christ