Beatitudes are fruits of hope, not cheap talk, pope says in Chile 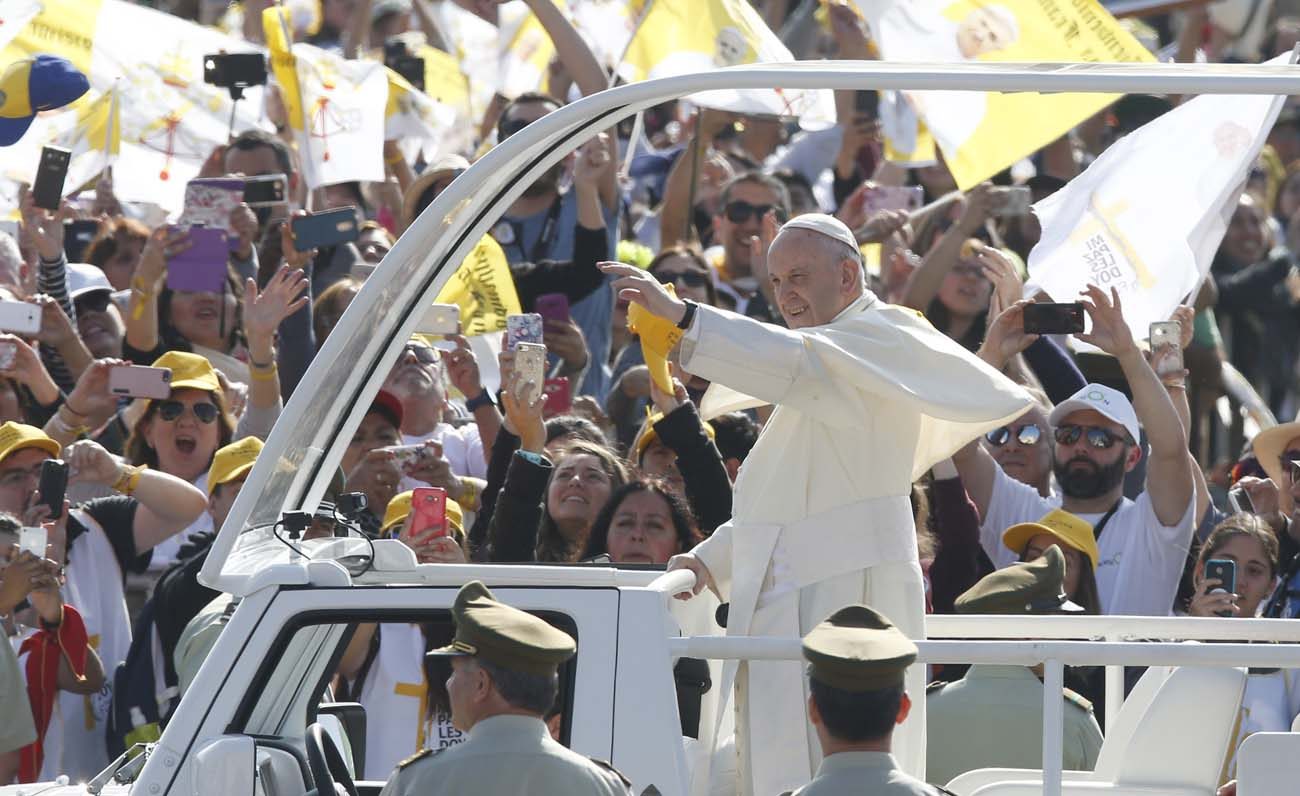 SANTIAGO, Chile (CNS) — The beatitudes are not cheap words for those who think they know it all yet do not commit to faith; they are the fruit of a hopeful heart that yearns for peace and happiness, Pope Francis said.

Christ’s response to the longings and aspirations of those seeking a life of happiness are not a “product of those prophets of dooms who seek only to spread dismay” or “mirages that promise happiness with a single ‘click,’ in the blink of any eye,” the pope said Jan. 16, celebrating his first public Mass in Chile.

“The beatitudes are born of the compassionate heart of Jesus, which encounters the hearts of men and women seeking and yearning for a life of happiness,” he said.

A sea of yellow and white flags waved throughout O’Higgins Park as Pope Francis arrived in his popemobile, greeting the estimated 400,000 people. By the middle of the Mass, it was 82 degrees. Pilgrims shielded themselves from the sun with ball caps and sun hats.

Despite several acts of vandalism and protests against the pope’s visit that made headlines in the Chilean capital, there was an atmosphere of joy and hope as crowds sang a traditional Latin American hymn welcoming the pope.

“Together like brothers, members of one church, let us go walking toward the Lord’s encounter,” the faithful sang.

The gifts also included an earthenware piece depicting the Quasimodo, a traditional Chilean procession during Holy Week, when men and women in traditional dress go, on horseback, to give Communion to the sick and elderly who cannot make it to church. A green truck represented the truck that St. Alberto Hurtado used to drive around the community to help the poor.

Reflecting on the Gospel reading from St. Matthew, Pope Francis said Jesus’ proclamation of the beatitudes is the answer to those who seek an encounter with him.

Jesus’ first act before preaching, the pope said, was to “look out and see the faces of his people.”

“Those faces awaken God’s visceral love. Jesus’ heart was not moved by ideas or concepts but by faces, persons. By life calling out for the life that the Father wants to give us,” he said.

The people of Chile, he added, know about rebuilding. They continue to “get up again after so many falls.”

“This is the heart to which Jesus speaks; that is the heart for which the beatitudes are meant,” the pope said.

By proclaiming the poor, those who mourn and the afflicted as blessed, Jesus “shakes us out of that negativity” and “the sense of resignation that tends to isolate us from others.”

Christians, the pope said, are also called to be peacemakers and work for reconciliation by “going out of our way to meet someone having a difficult time, someone who has not been treated as a person, as a worthy son or daughter of this land.”

“This is the only way we must forge a future of peace, to weave a fabric that will not unravel,” Pope Francis said.

Among the bishops concelebrating the Mass was Bishop Juan Barros, whose appointment as bishop of the Diocese of Osorno sparked several protests ahead of the pope’s visit. Bishop Barros’ former mentor, Father Fernando Karadima, was sentenced to a life of prayer and penance by the Vatican after he was found guilty of sexually abusing boys.

Santiago’s metro opened early for pilgrims to attend the Mass.

Veronica Ruiz, an Argentine living in Chile, was on a packed train with her brother, daughter and son-in-law. She said she also planned to see Pope Francis in Peru during his Jan. 18-21 visit. They were prepared for a long wait with food, water and sunscreen.

“We have been Catholics all our lives, and to see the pope fills us with energy. We got up at 3 a.m. to be here, and we are so excited that we don’t know if we slept or not; but, never mind, we are here now and very happy to be there.”

At O’Higgins Park, people from all over Chile arrived by bus hours before the Mass. Pope on horseback kept pilgrims orderly. Many pilgrims lined up to buy souvenirs — flags, bags, key rings and photos featuring Pope Francis.

One Chilean woman, who identified herself only as Claudia, was there with husband and four children, ages 13, 8, 3 and 1.

“Even though some of my children are very little, we think it is important they see this. We want our faith to go out on to the streets and not just be in the church,” she said. “Huge Masses like this make us feel that God is alive and present in our lives.”

Contributing to this story was Jane Chambers in Santiago.