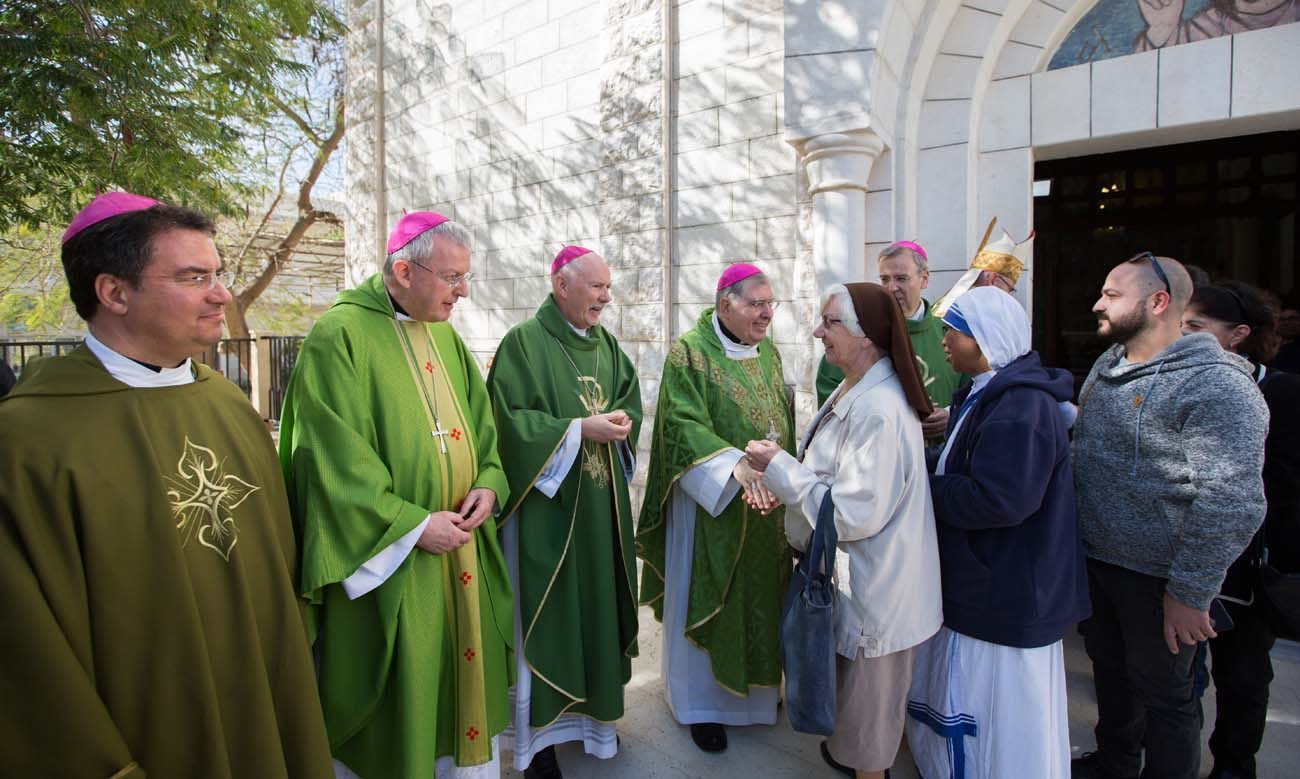 JERUSALEM (CNS) — Even when a situation is hopeless, people must not lose hope, Archbishop Stephen Brislin of Cape Town, South Africa, told parishioners at the Gaza Strip’s only Catholic parish.

Concelebrating Mass at Holy Family Parish in Gaza Jan. 14, the archbishop encouraged Gazans to hold fast to hope, despite the difficult conditions they have lived under for a decade. Israel has blockaded Gaza since the election of the Hamas-controlled government in 2007. Egypt also has imposed restrictions at its border crossing, so travel movement is slow.

Archbishop Brislin was in Gaza as part of the annual Holy Land Coordination, in which bishops from North America, Europe and South Africa meet with Israeli and Palestinian groups to promote dialogue and peace. This year the focus is on education and young people, and the importance of education for building peace in the region.

The archbishop told Catholic News Service that, on his third visit to Gaza, he noticed more movement along the Gaza-Israeli border and more reconstruction since the 2014 war. But he said the people he spoke with expressed more frustration than in the past.

“The young people feel they must decide between staying in Gaza or leaving to find schools and jobs in other parts of the world,” said Archbishop Brislin. “This affects the Christian community. The young people who stay in Gaza are the real heroes. They are willing to sacrifice in order to create families and Christian life in Gaza.”

This frustration stems from the feeling that nothing is being done to improve the situation in Gaza, so young people see no sign of hope for their future, said Bishop Declan Lang of Clifton, England.

Gaza has a total unemployment rate of 47 percent, while young people face 70 percent unemployment, he said, calling the Christian community a “courageous community as a minority community.”

“It is important to listen to their needs,” he said.

Bishop Oscar Cantu of Las Cruces, New Mexico, told CNS that Gazans “are scraping by, making a living, a poor living, but making the best out of the situation and demonstrating the resilience of the human spirit.”

Nevertheless, Bishop Cantu expressed concern at the shrinking number of Christians in Gaza, noting that only 130 Catholic parishioners remain.

“Not long ago, there were 1,700,” he said. “The numbers of Christians in Gaza is dropping precipitously. It is just sad to hear, because obviously there is little to no opportunity for young people. There is little encouragement for them to stay.”

Despite the dwindling Christian community, the three Catholic schools do a tremendous job serving as a bridge between the tiny community and the 1.7 million Muslim majority of the Gaza Strip, he said. Most students attending these schools are Muslim.

“They create a bridge of understanding between Christians and Muslims, teaching a Catholic world view and the dignity of the human person, which is so important,” said Bishop Cantu.

He wonders, he said, what would happen to the important ministry of the schools if the Catholic community continues to dwindle.

The perseverance of the Christian community in Gaza, with its Christian tradition as the place where the Holy Family passed through on their way to Egypt, is an imperative, said Archbishop Brislin. He said there must be new job opportunities, new skills and cultural projects for young people.

“Basically, people are imprisoned. It can feel very claustrophobic … for young people with a lot of dreams and hopes and potentials. And these potentials are broken because of the lack of opportunities,” he said.

PREVIOUS: Beatitudes are fruits of hope, not cheap talk, pope says in Chile