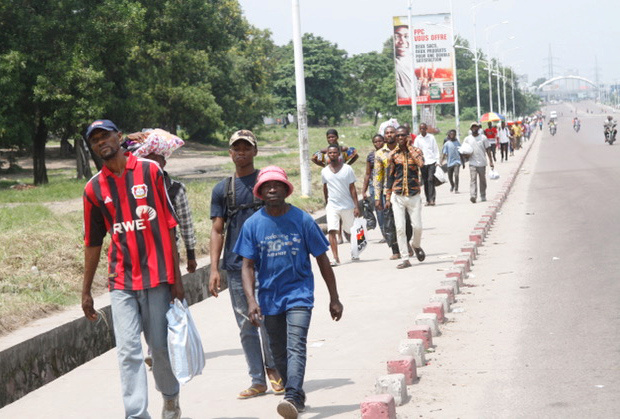 The Vatican Embassy in Kinshasa backed local church officials, saying that “the promotion of social justice and the defense of political and civil rights of citizens are an integral part of the social doctrine of the church.”

The Jan. 2 statement said the nuncio was keeping the Vatican Secretariat of State informed, but people should not look for approval or condemnation “because it is standard in the church to respect the competence of the diocesan bishops.”

The nunciature also updated the number of dead and churches involved.

The Dec. 31 protest against rule by President Joseph Kabila was organized by the Kinshasa archdiocesan lay coordination committee. At least six priests and a seminarian were among those detained.

“We condemn with utmost vigor this unjustified violence,” the Congolese bishops’ conference said in a statement Jan. 2.

“We similarly denounce this attack on freedom of worship, which is guaranteed in every democratic state, as well as the profanation of churches and physical aggression against the faithful and their priests.”

The statement said the bishops were “profoundly shocked by such ignoble acts,” and would demand a “serious and objective inquiry” into who was responsible.

Police also used tear gas and batons against Massgoers in some of the capital’s parishes and violently broke up attempted marches in which protesters demanded fresh elections in the country. The nunciature said 134 churches were surrounded by police, and at least two parishes were not permitted to celebrate Mass Dec. 31. In five parishes, Mass was interrupted by security forces.

In a statement, Cardinal Laurent Monsengwo Pasinya of Kinshasa called the response “nothing short of barbaric.” He said people at Mass, armed only with Bibles and rosaries, were attacked with tear gas.

A U.N. spokeswoman initially said seven deaths had been recorded in Kinshasa, and another at Kananga. Congolese authorities denied that the deaths were linked to the protests, but the nunciature documented the parishes where the five deaths occurred.

The violence was condemned by U.N. Secretary-General Antonio Guterres, who urged Kabila’s government to show restraint and “respect the rights of Congolese people to free expression.”

In a November statement, the bishops’ conference said church observers had recorded 56 deaths and 355 arrests in half a year of opposition protests. They urged Kabila to release political detainees and stick to the Dec. 31, 2016, accord.

The rector of Kinshasa’s St. Alphonse Parish, Msgr. Hugues Ndongisila, told Radio France Internationale that police had beaten and robbed Catholics when they sought refuge in his church, also shooting out its stained-glass windows. He said the bodies of two dead protesters had later been collected by the Red Cross.

NEXT: Don’t confess other’s faults, own up to sins, pope says at audience