In Peru, Pope Francis likely to return to themes addressed in Chile 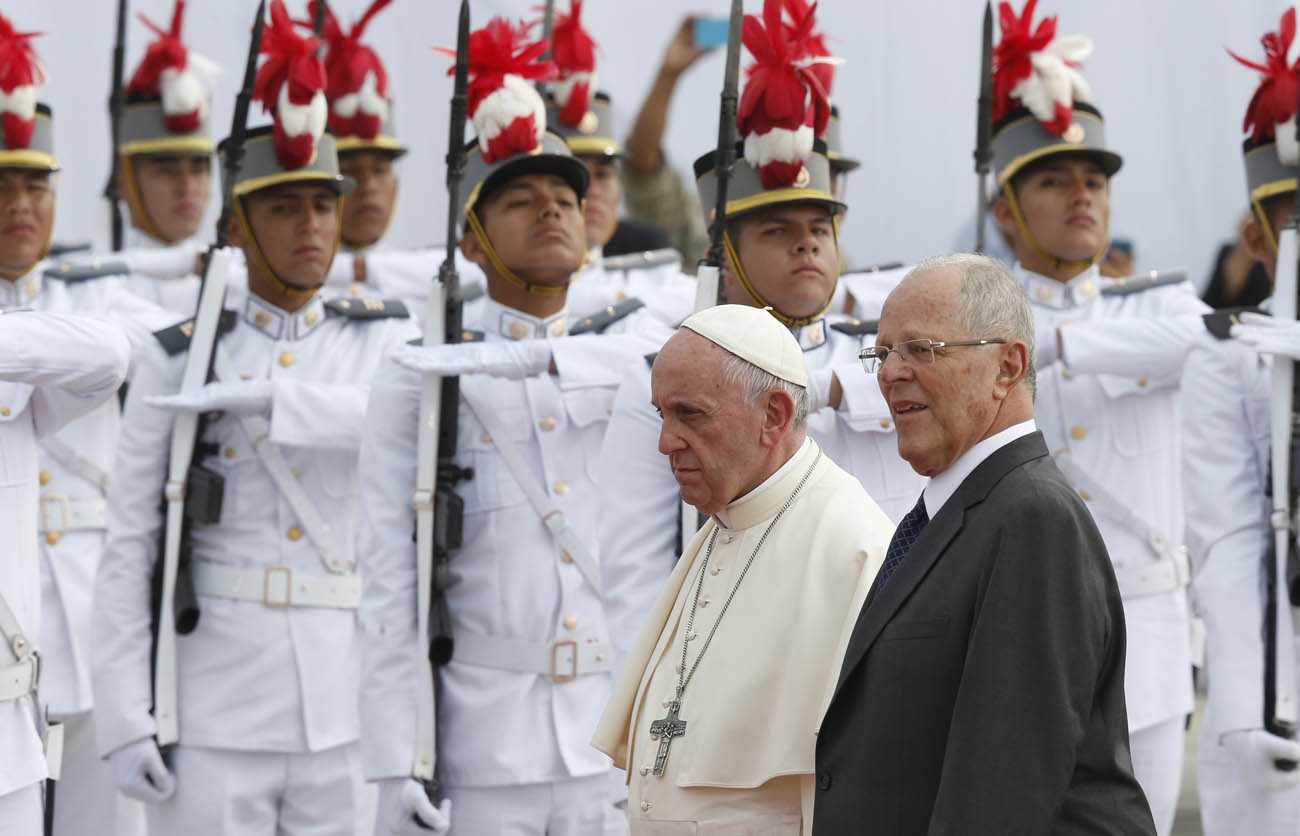 LIMA, Peru (CNS) — Pope Francis was greeted by the Peruvian president, the country’s bishops, a military honor guard and a children’s orchestra on his arrival in Peru on Jan. 18. During his visit, he will meet with Amazonian indigenous people from three countries, visit a neighborhood devastated by flooding early last year, and pray in the place of Peru’s greatest popular religious devotion.

Accompanied by President Pedro Pablo Kuczynsky, the pope heard the “Hallelujah Chorus” sung by a choir accompanied by a children’s orchestra. The bishops filed past, greeting the president, and the Cabinet ministers then greeted the pope, who blessed a religious item for one.

Helicopters buzzed overhead and security was heavy along the motorcade route from the airport to the nuncio’s residence, where he will stay, while onlookers waved and some chanted “Pope Francis, we want your blessing.”

In Peru, he is likely to return to several themes that marked his visit to Chile. In the southeastern town of Puerto Maldonado, members of various Amazonian indigenous peoples will ask for his support in defense of their rights to territory, health, education and their indigenous identity. Those demands echo sentiments expressed by Mapuche people in southern Chile.

Visiting the Amazonian area where forests have been obliterated by unregulated gold mining, the pope will call on Christians to care for “our common home,” as he did in the encyclical, “Laudato Si’.”

Pope Francis also is expected to mention migration and human trafficking. Thousands of migrants, mainly from Venezuela, have arrived in Peru in recent years in search of better opportunities. The gold-mining area around Puerto Maldonado is a destination for human traffickers, who force women into prostitution.

As he did in Chile, he is likely to raise the issue of sexual abuse by church workers, in the wake of accusations against leaders of Sodalitium Christianae Vitae, a Catholic movement founded in Lima in the 1970s. The Vatican recently named a Colombian bishop to oversee the group because of concerns about formation and financial management.

The trip will highlight the deep faith that Peruvian Catholics express through popular religious devotions in various parts of the country.

On Jan. 19, the pope will meet with indigenous people from the Amazonian regions of Peru, Brazil and Bolivia. The event will mark the first step toward the Synod of Bishops for the Amazon, which Pope Francis has called for 2019. He also will meet with civil society representatives and visit a children’s home founded by a Swiss missionary priest.

After returning to Lima in the afternoon, he will address government officials, civil society representatives and members of the diplomatic corps and speak with Kuczynski. He also will meet with fellow Jesuits at the ornate colonial San Pedro Church in downtown Lima.

On the second day of his trip, Pope Francis will travel to Trujillo, on Peru’s northern coast. He will visit the neighborhood of Buenos Aires, where houses were inundated with 3-5 feet of water and mud during unseasonable flooding in March 2016. Father Hipolito Puricaza Sernaque, secretary-general of the diocesan Caritas office, said people hope the pope’s words during his trip will “soften the hearts of those responsible for the (post-flood) reconstruction, bring hope and renew our faith in God.”

He also will celebrate an open-air Mass on the beach. Pilgrims from various parts of northern Peru will greet the pope with images of Jesus and Mary that are central to popular devotions in their regions. The pope will pray before the Marian images, particularly the one known as the Virgen de la Puerta, or Our Lady of the Gate, before returning to Lima.

On Jan. 21, Pope Francis will visit the shrine of Our Lord of the Miracles, Peru’s largest popular devotion, and pray before the relics of Peruvian saints, including St. Rose of Lima and St. Martin of Porres. He also will meet with the country’s bishops and pray the Angelus in Lima’s main plaza before celebrating an open-air Mass.