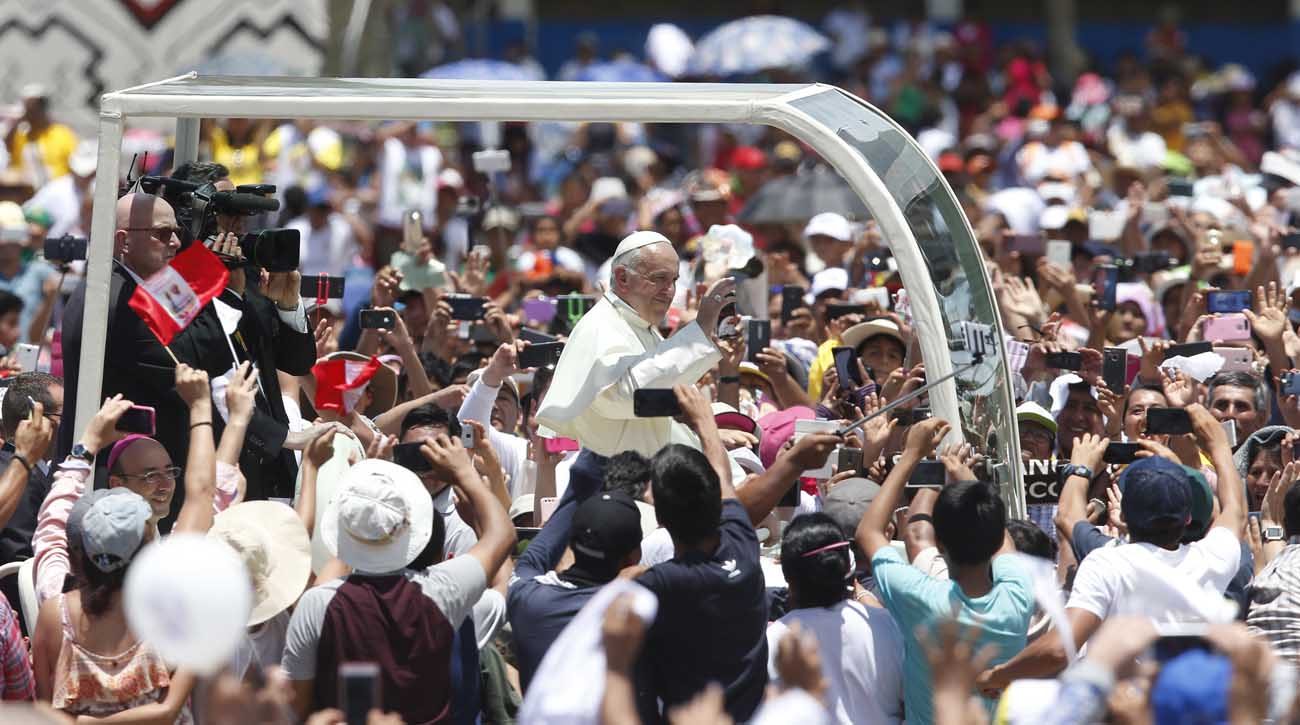 PUERTO MALDONADO, Peru (CNS) — Society cannot look the other way and allow a culture that demeans the dignity of women to persist, Pope Francis said.

Speaking to the people of Puerto Maldonado, located in the region known as Madre de Dios (“Mother of God”), Pope Francis said it was sad to see how “in this land, which is under the protection of the Mother of God, so many women are devalued, denigrated and exposed to endless violence.”

“Violence against women cannot be treated as ‘normal,’ maintaining a culture of machismo blind to the leading role that women play in our communities,” the pope said.

Thousands of pilgrims gathered in an open field at the Jorge Basadre Institute, many traveling from other parts of the country to see the pope. Some traveled 12 hours by bus from Cuzco to Puerto Maldonado, and others camped out in the early morning.

One woman, Andrea, traveled all the way from Mazuco, over 100 miles east of Puerto Maldonado. She told one journalist that she traveled three hours, “a little by bus and a lot of walking.”

“I can’t believe he’s here, much less that I made it here too,” she said.

Despite temperatures hovering slightly above 90 degrees, the sweltering heat did little to stifle the joy of the people who waved flags bearing the papal colors and chanting, “Francisco, amigo, la selva esta contigo” (“Francis, friend, the jungle is with you.”)

In his address, the pope said the diverse peoples of Puerto Maldonado who came from the far reaches of the Amazon represent a “beautiful image” of a church without borders “where all peoples have a place.”

“How much we need moments like these, to be together and, regardless of our place of origin, to inspire us to build a culture of encounter that renews us in hope,” the pope said.

The people of Madre de Dios, he continued, can look to the example of Mary, who also came from a small village considered a “no man’s land” yet was chosen for something great.

Mary, he added, can also give them a sense of belonging.

“This is not a land of orphans, but a land that has a mother! And if it has a mother, it has sons and daughters, a family, a community. Where there is a mother, a family and a community, problems may not disappear, but we certainly find the strength to confront them differently,” the pope said.

Puerto Maldonado, located in southeastern Peru, is known locally as “the capital of biodiversity.” However, gold mining and exploitation of people and resources threaten the lives of its inhabitants and risks the extinction of the area’s exotic wildlife and vegetation.

Denouncing the evils of exploitation, the pope said although many are accustomed to the term “human trafficking,” in reality it is nothing more than “slavery for work, sexual slavery, slavery for profit.”

He also warned of a “motherless culture” that exploits the environment and its inhabitants and “only wants to consume.”

“The earth is treated in accordance with this logic. Forests, rivers and streams are exploited mercilessly, then left barren and unusable. Persons are also treated in the same way: They are used until someone gets tired of them, then abandoned as useless,” the pope said.

People’s desire for a better life can also be exploited by working dangerous mines with the promises of finding gold, which “can turn into a false god that demands human sacrifices,” Pope Francis warned.

“False gods, the idols of avarice, money and power, corrupt everything. They corrupt people and institutions, and they ruin the forest. Jesus said that there are demons that require much prayer to expel. This is one of them,” the pope said.

The pope encouraged the people of Puerto Maldonado to unite as a people of faith so that they may experience the true life that comes from Christ and “not a make-believe life, like the one offered by all those dazzling false promises; they promise life, but lead us to death.”

He also called on them to care for and love their land, which contains “one of the most exuberant explosions of life on the planet.”

“Love this land, realize that it belongs to you. Breathe it in, listen to it, marvel at it. Fall in love with this land called Madre de Dios, commit yourself to it and care for it. Do not use this land as a mere disposable object, but as a genuine treasure to be enjoyed, cultivated and entrusted to your children,” Pope Francis said.

PREVIOUS: In Peru, Pope Francis likely to return to themes addressed in Chile

NEXT: Congolese forces use violence to disperse church-led protests