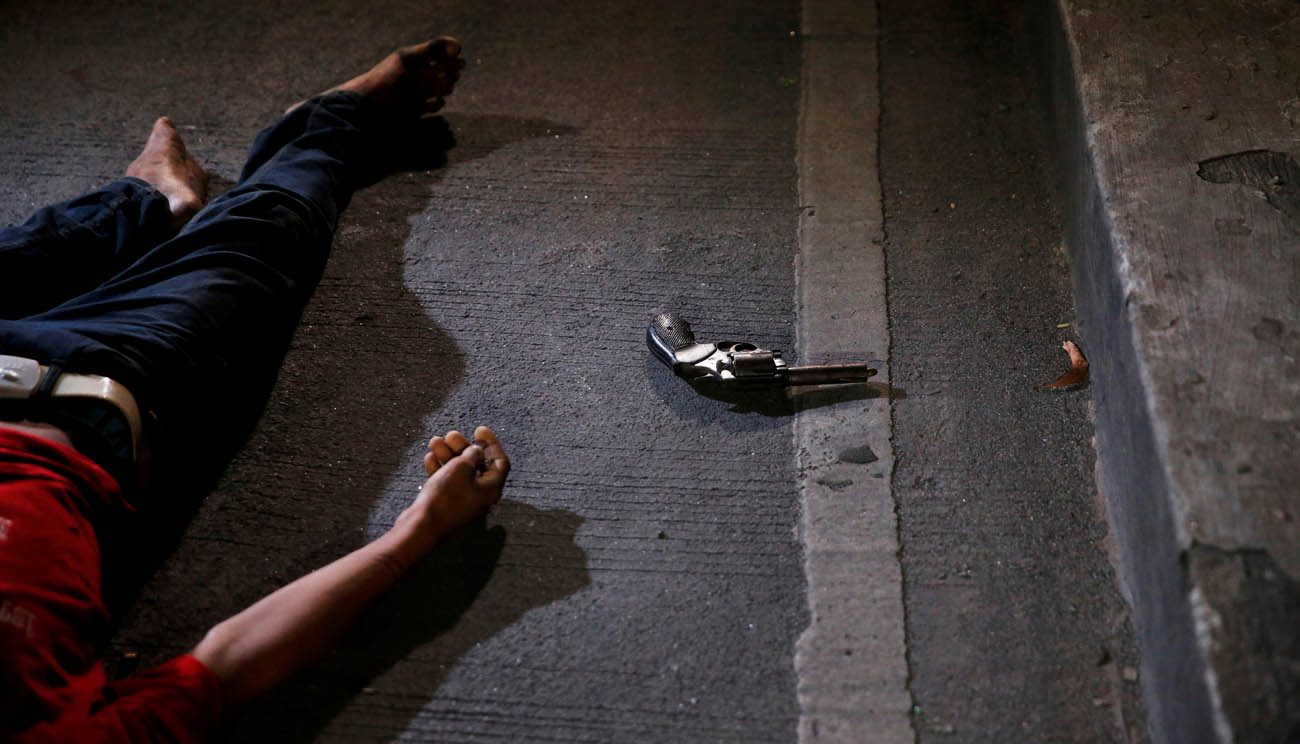 A revolver is seen in 2017 near the body of a man reportedly killed by police during drug operations in Manila, Philippines. (CNS photo/Erik De Castro, Reuters)

Human rights groups say President Rodrigo Duterte’s campaign against illegal drugs has claimed the lives of at least 13,000 people since it was launched in 2016.

“Tokhang,” a combination of the Visayan words “toktok” (knock) and “hangyo” (appeal), is the police’s door-to-door campaign to convince drug users to surrender for rehabilitation.

“The spirit of ‘Tokhang,’ if implemented properly, is bloodless,” said dela Rosa. “That’s why it’s called knock and plead,” added the police chief.

However, Bishop Pablo Virgilio David of Calookan expressed doubt that authorities would be able to get rid of the stigma of the killings that came with the campaign last year.

“They have barely washed the blood from the unresolved killings,” the bishop said.

In its own “accomplishment report” released last the month, the government listed nearly 4,000 “drug personalities” killed during the anti-drug operations, while 16,355 homicide cases were reported to be under investigation.

“How many ‘deaths under investigation’ perpetuated by masked vigilantes have been resolved?” asked Bishop David. “Why have the killers never been apprehended, pursued, or caught?”

The bishop told ucanews.com that the killings never stopped, even after the police declared in October the suspension of the anti-narcotics campaign.

Bishop David said at least 19 people were killed from Oct. 13 to Jan. 13 near his residence in Caloocan, where most drug-related killings in metropolitan Manila were reported.

Benedictine Sister Mary John Mananzan, a vocal critic of the government’s anti-narcotics war, also said the killings have not stopped.

“The relaunching only means intensifying the drug war, and we will see more deaths,” she said. “Of course, the victims will continue to be the poor.”

Nardy Sabino, secretary-general of the Promotion of Church People’s Response, said the resumption of the anti-drugs campaign will only “strengthen the culture of impunity” in the country.

“There is no remorse in the leadership of the national police to the countless cases of abuses and murders,” he said. “The police must focus on the supply chain. They should arrest big drug dealers and not kill the poor, who are just victims of this huge industry.”

NEXT: ‘No one can replace a mother,’ Chilean inmate tells Pope Francis