Pope challenges Chilean youth to ask, ‘What would Christ do?’ 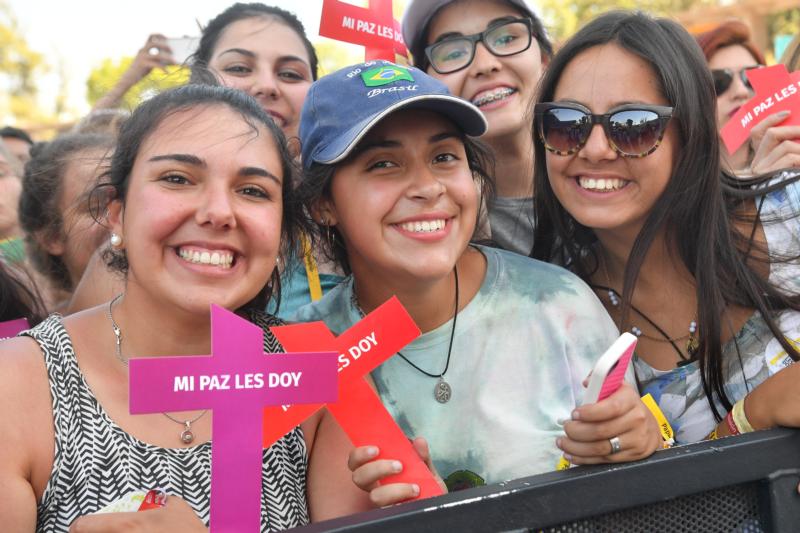 Pilgrims smile while holding crosses as they wait for Pope Francis to arrive for a Jan. 17 meeting with youths in Santiago, Chile. (CNS photo/Luca Zennaroi, EPA)

SANTIAGO, Chile (CNS) — Pope Francis challenged young Chileans, telling them to always ask themselves, “What would Christ do in my place?”

“At school, at university, when outdoors, when at home, among friends, at work, when taunted: ‘What would Christ do in my place?'” he told thousands of young people who came from all over Latin America and Chile to a youth rally at Santiago’s Maipu shrine.

“When you go dancing, when you are playing or watching sports: ‘What would Christ do in my place?’ He is the password, the power source that charges our hearts, ignites our faith and makes our eyes sparkle.”

Pope Francis told young people they are the protagonists who will change the church, and the young people responded. Throughout the service they frequently shouted, “This is the pope’s young people.”

He spoke of the inspiration of St. Alberto Hurtado, founder of the Hogar de Cristo movement, which provides vocational training and other services for young people. The saint “had a golden rule, a rule for setting his heart ablaze with the fire that keeps joy alive. For Jesus is that fire; everyone who draws near to it is set ablaze. Hurtado’s password was quite simple — if your phones are turned on, I would like you to key this in. He asks: ‘What would Christ do in my place?'”

Several young people were chosen to tell Pope Francis about their dreams and hopes. Ariel Rojas told him, “We recognize in you a way of being, a way of love.”

Rojas got a loud cheer when he told Pope Francis, “We want to help you and support you with your faith, and we want you to know that we will help you when you are tired, because of all the many things you have to do.”

Many of the pilgrims were wearing purple T-shirts that showed they were affiliated with the Jesuits. One of them, Natalia Tomas, had traveled more than 500 miles from Puerto Montt. She told Catholic News Service she is following Pope Francis’ advice to “stir things up and get out and help people.”

Many of the young people signed up to be volunteers, like Rodrigo Opazo, 16, from Colina. He told CNS: “I want to help the pope; it makes me happy. And when I am older I can tell my family I helped the pope.”

“It’s been an incredible experience,” said Nicolas Merino, another papal volunteer. “We had to help 40,000 people get into the Mass at O’Higgins Park. … And today I am a pilgrim here in Maipu, and I am very interested in what he says to the young people.”

“I want to take the pope’s advice and not just treat this as a one-off event, but a catalyst for going out and inspiring others and breathing new life into the church. That is our responsibility as young people,” he told CNS.

The meeting was filled with symbolism because Maipu shrine, formally the Basilica of Our Lady of Carmel, honors Chile’s patron saint. There was a huge statue of her on the stage, which the pope blessed at the end of the ceremony.

The young people presented Pope Francis with a miniature Chilean-blue cross with a red ribbon to symbolize the blood of Christ and an alliance that all of Chile is together. They also presented a white star. Red, white and blue are the colors of the Chilean flag.

Later, the pope met with professors, staff and students at the Pontifical Catholic University of Chile. He told them they can contribute to fostering peaceful coexistence in the country through education.

“Peaceful coexistence as a nation is possible, not least to the extent that we can generate educational processes that are also transformative, inclusive and meant to favor such coexistence,” he said.

He also emphasized the need for the university to “progress as a community,” and praised the evangelization efforts of the university’s chaplaincy, which “is a sign of a young, lively church that goes forth.”

“The missions that take place each year in different parts of the country are an impressive and enriching reality. With these, you are able to broaden your outlook and encounter different situations that, along with regular events, keep you on the move,” the pope said.

Experiences like evangelizing, he added, should not remain limited to university life because the “present-day culture demands new forms that are more inclusive of all those who make up social and, hence, educational realities.”

This evangelizing can also “overcome every antagonistic and elitist approach to learning,” Pope Francis said.

“This prophetic role demanded of us prompts us to seek out ever new spaces for dialogue rather than confrontation, spaces of encounter rather than division, paths of friendly disagreement that allow for respectful differences between persons joined in a sincere effort to advance as a community towards a renewed national coexistence,” the pope said.

NEXT: Pope marries couple on flight during Chilean trip