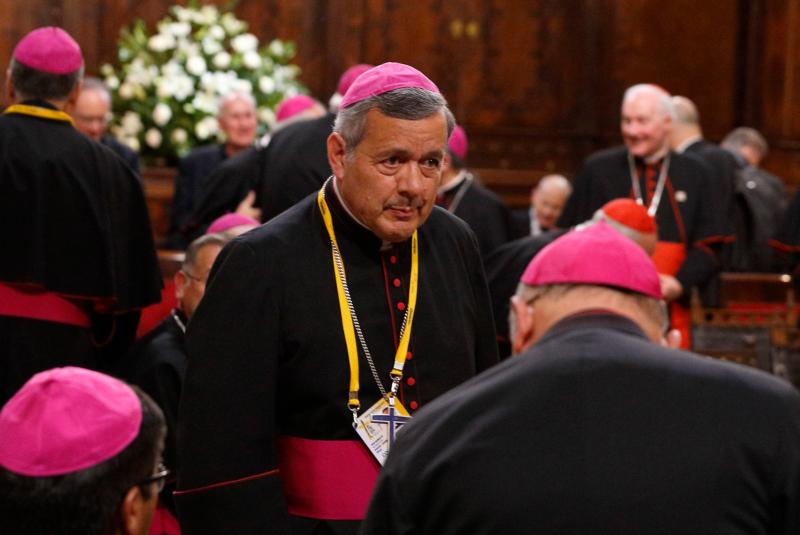 Bishop Juan Barros of Osorno, Chile, arrives for Pope Francis’ meeting with Chile’s bishops in the sacristy of the cathedral in Santiago, Chile, Jan. 16. The pope has faced criticism for his appointment of Bishop Barros, who is alleged to have covered up sexual abuse by a priest. (CNS photo/Paul Haring)

Greg Burke, the spokesman, said the pope met with “a small group of victims of sexual abuse by priests” at the apostolic nunciature in Santiago, Chile.

“The meeting took place in a strictly private way, and no one else was present: only the pope and the victims,” Burke told journalists that evening.

The private setting, he added, allowed the group to speak freely with the pope “and recount their sufferings.

Pope Francis “listened, prayed and cried with them,” Burke said.

Also present at the press conference was Auxiliary Bishop Fernando Ramos Perez of Santiago, secretary-general of the Chilean bishops’ conference.

Bishop Ramos addressed criticism regarding the presence of Bishop Juan Barros of Osorno at several papal events, including the pope’s meetings with the country’s clergy as well as the bishops of Chile.

Bishop Barros’ appointment as bishop by the pope in 2015 drew outrage and protests due to his connection to Father Fernando Karadima, his former mentor. Father Karadima was sentenced to a life of prayer and penance by the Vatican after he was found guilty of sexually abusing boys.

“Bishop Barros is bishop of Osorno and was named by the pope. All bishops have the right and responsibility to participate at the events. That was the only reason why” he was present, Bishop Ramos said.

Arriving in Iquique Jan. 18 at the site of his final Mass in Chile, Pope Francis was asked by local journalists about his support for Bishop Barros.

The pope reiterated that he has yet to see any evidence that Bishop Barros knew or witnessed the abuses committed by his former mentor.

“The day they bring me proof against Bishop Barros, I will speak. There is not one piece of evidence against him. It is calumny. Is that clear?” the pope told the journalists.

Earlier Jan. 16, the pope asked forgiveness from the victims of sexual abuse during an address to government authorities and members of Chile’s diplomatic corps, expressing his “pain and shame at the irreparable damage caused to children by some ministers of the church.”

Burke said it was significant the pope addressed the issue of clergy sex abuse during his meeting with government authorities “because normally he speaks about it when meeting with bishops or priests.”

“The fact that he spoke there means that it is an evil not only for the church but for society,” Burke said.

NEXT: Christians must convert to ecumenism, cardinal says