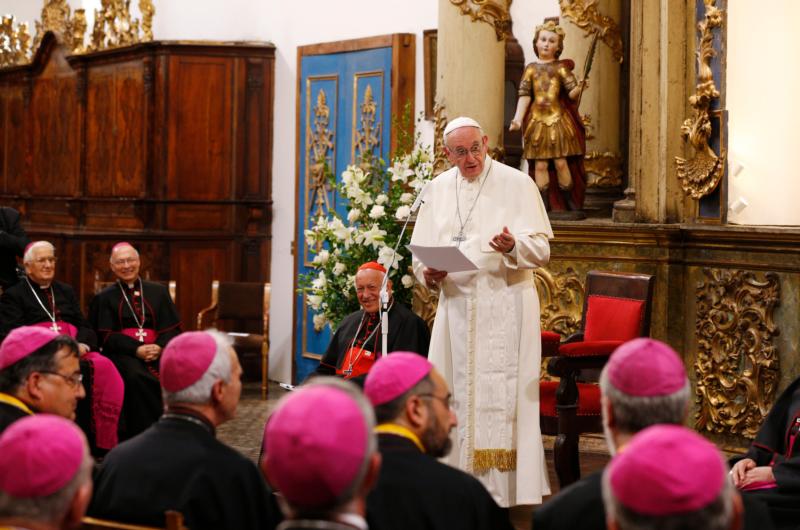 Pope Francis meets with Chile’s bishops in the sacristy of the Metropolitan Cathedral in Santiago, Chile, Jan. 16. (CNS photo/Paul Haring)

SANTIAGO, Chile (CNS) — The evil of sexual abuse committed by members of the clergy has betrayed the trust of the faithful and caused suffering to those in priesthood and religious life who bear the consequences of their brethren’s sins, Pope Francis said.

Meeting with priests, men and women religious, seminarians and novices Jan. 16, the pope said he is aware of the “harm and suffering of the victims and their families, who saw the trust they had placed in the ministers of the church betrayed.”

He also recognized the efforts of the country’s priests and religious to “respond to this great and painful evil,” and he said he knew sometimes innocent priests and men and women religious are often viewed with suspicion by others.

“I know that at times you have suffered insults in the subway or walking in the street; that by going around in clerical attire in many places, you pay a heavy price,” Pope Francis said during the meeting in Metropolitan Cathedral.

Earlier in the day, the pope asked forgiveness from the victims of sexual abuse during an address to government authorities and members of Chile’s diplomatic corps, expressing his “pain and shame at the irreparable damage caused to children by some ministers of the church.”

While thousands lined the streets along the route to the cathedral, waving flags and chanting greetings to the pope, security was noticeably tighter after an act of vandalism at a local parish that morning seemed to blame Pope Francis for cases of clerical sexual abuse in the country.

Chilean media reported vandalism at Divine Providence Parish, not far from O’Higgins Park, where the pope celebrated Mass. Vandals spray painted the words “complice” (“accomplice”) and “papa arde” (“burn, pope”) on the facade of the church below a banner welcoming Pope Francis.

The pope also has drawn ire because of his appointment of Bishop Juan Barros as head of the Diocese of Osorno, due to the bishop’s connection to Father Fernando Karadima, his former mentor. Father Karadima was sentenced to a life of prayer and penance by the Vatican after he was found guilty of sexually abusing boys.

Bishop Barros, along with the country’s bishops, attended the pope’s meeting with the clergy.

Arriving at the cathedral, the pope was welcomed by thousands of men and women chanting “Viva il papa” (“Long live the pope”). He then laid a single white rose on the altar of a chapel in the cathedral and silently prayed for a moment before taking his seat.

In his talk, the pope drew from the example of St. Peter who, despite his sinfulness, received mercy from the Lord.

“We are not here because we are better than others, we are not superheroes who stoop down from the heights to encounter mere mortals. Rather, we are sent as men and women, conscious of having been forgiven,” he said.

Pope Francis said that through their own personal experience, clergy, religious men and women, seminarians and novices are called not to expect “an ideal world, an ideal community or an ideal disciple” but instead “make it possible for every disheartened person to encounter Jesus.”

“One does not love ideal situations or ideal communities; one loves people,” the pope said.

After delivering his talk, Pope Francis met briefly with the country’s bishops in the cathedral sacristy.

The pope said he was glad their meeting followed the gathering with priests and men and women religious because “one of our principal tasks is precisely to be close to consecrated life and to our priests.”

Bishops, he said, should not be paternalistic or authoritarian when dealing with their clergy, but rather imitate St. Joseph.

“Stay close to your priests, like St. Joseph, with a fatherhood that helps them to grow and to develop the charism that the Holy Spirit has wished to pour out upon your respective presbyterates,” the pope said.

He also said he “was concerned by the formation of seminarians” and warned against the temptations of clericalism.

“Seminaries must stress that future priests be capable of serving God’s holy and faithful people, acknowledging the diversity of cultures and renouncing the temptation to any form of clericalism,” Pope Francis said.

“Let us say no to clericalism and to ideal worlds that are only part of our thinking, but touch no one’s life,” he said.

PREVIOUS: ‘No one can replace a mother,’ Chilean inmate tells Pope Francis

NEXT: Pope meets with clergy sex abuse victims in Chile