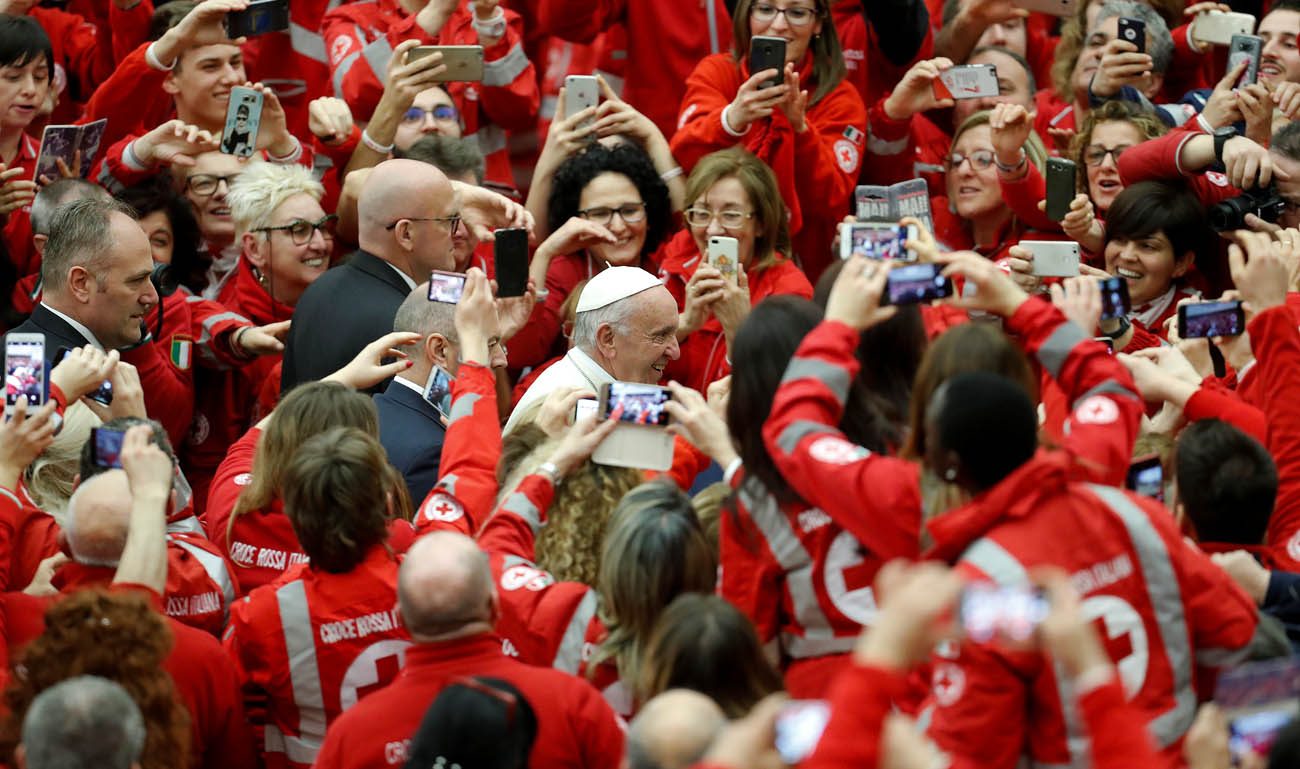 Pope Francis arrives to lead an audience with members of the Italian Red Cross in Paul VI Hall at the Vatican Jan. 27. The pope told them their rescue of migrants at sea and care for them is a "prophetic sign." (CNS photo/Remo Casilli, Reuters)

VATICAN CITY (CNS) — The world needs the “slap” of good examples to break the cycle of selfishness and to start seeing people in need not as masses or statistics, but as human beings, Pope Francis said.

Meeting Jan. 27 with members of the Italian Red Cross, the pope told them their rescue of migrants at sea and care for them in refugee centers is a “prophetic sign.”

“The prophet — to speak in a language everyone understands — the prophet is one who ‘slaps’ with his way of living, with the service he provides, with his words,” the pope said. “He slaps, awakens, gives a real slap to social selfishness, to the selfishness of society and reawakens the best that is in people’s hearts. But he gives this slap with his word and his witness, not with his hand.”

Ignoring the needs of the poor and those who are suffering is possible, he said, because they are “not recognized as unique and unrepeatable, and they remain invisible because they are hidden by the shadow of indifference.”

Those who are selfish, he said, do not see other people, do not hear their cries and do not perceive their suffering.

“The throwaway culture, which is so current today, is an anonymous culture without bonds and without faces,” the pope said. “It takes care only of some people, excluding many others.”

But the good Samaritan must be the model for Christians and for those inspired by the principles of the Red Cross, he said.

In the Gospel story, Pope Francis said, when the Samaritan sees the traveler left half dead alongside the road, “he does not interrogate him before helping him.” He does not ask where he comes from and what religion he belongs to or whether he did something to provoke or deserve the attack.

“No, the good Samaritan does not subject the injured man to any initial exam; he does not judge him. And his assistance does not depend on any moral traits or, even less, to any religious ones,” the pope said.

The good Samaritan, he said, is like Jesus, who bowed low to offer salvation to every human being.