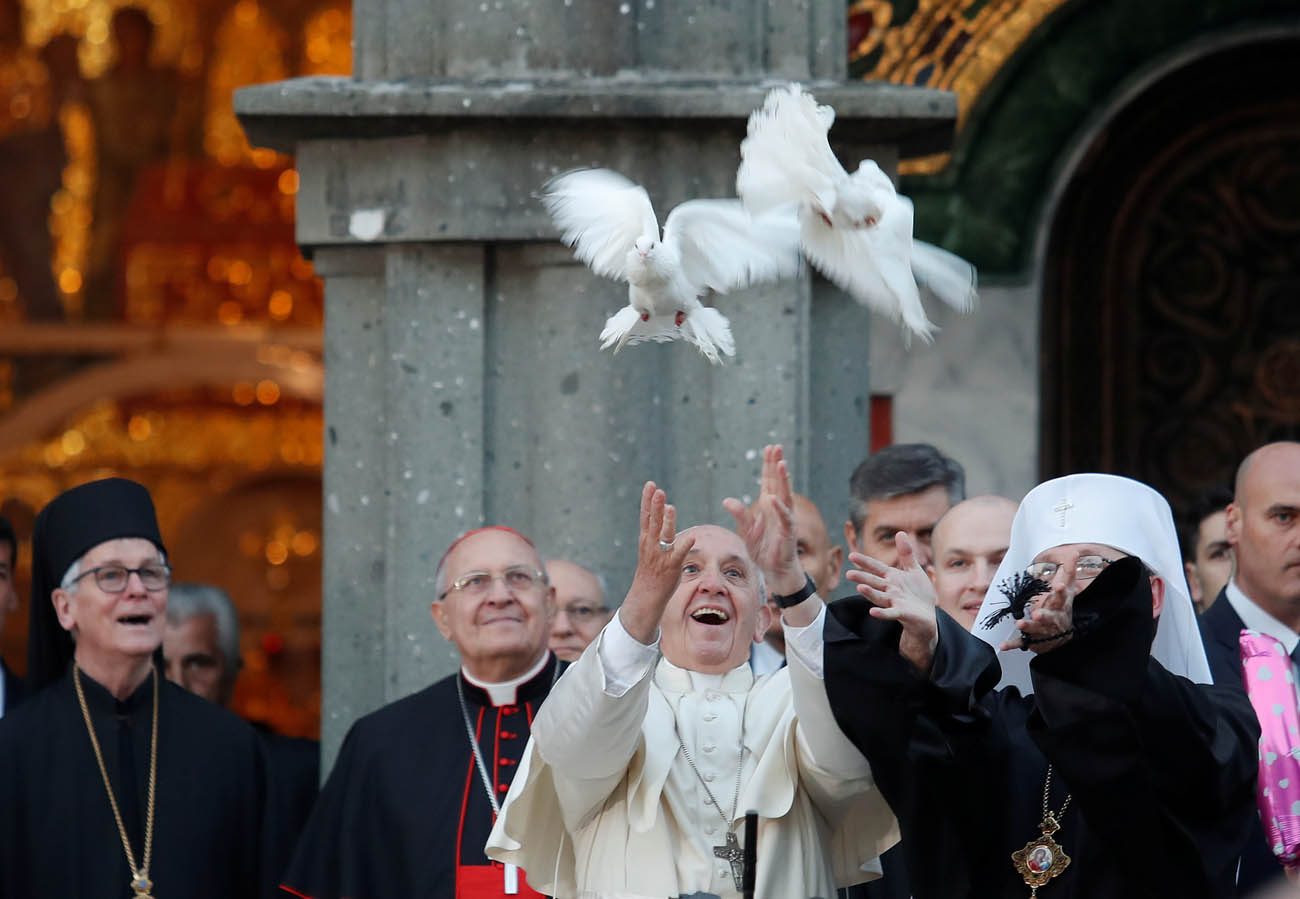 ROME (CNS) — Pope Francis’ visit to the Ukrainian Catholic Basilica of Santa Sophia in Rome combined elements of his parish visits with elements of his visits to centers for migrants and refugees.

While the basilica is a fully functioning parish, most of its members are migrant women working in Rome and sending money home to their families in Ukraine.

In his speech to the community gathered at Santa Sophia Jan. 28, Pope Francis offered his own reflection on “The Vibrant Parish: a Place to Encounter the Living Christ,” which is the theme of a multiyear renewal effort in Ukrainian Catholic parishes around the world.

“A vibrant parish is a place to encounter the living Christ,” he said. “I hope that you always will come here for the bread for your daily journey, the consolation of your hearts, the healing of your wounds.”

A vibrant parish, he said, also is the place to pass on the faith to the younger generations.

But Pope Francis also spoke about the loneliness of being a migrant, the hard work and low pay many Ukrainian women receive in caring for children or the elderly in Italy and, particularly, the worry and concern over the ongoing war in Eastern Ukraine.

The pope also used the visit as a way to underline the importance of remembering the past and honoring those who dedicated their lives to preserving and sharing the faith, including under the harshest conditions, when the Ukrainian Catholic Church was outlawed by the Soviet Union and its bishops and many of its priests were imprisoned.

The first person he honored was the late Cardinal Josyf Slipyj, who was exiled to Rome after 18 years in Soviet jails and gulags. The cardinal built the basilica as a cathedral for the Ukrainian Catholic Church, which was banned in its homeland.

Pope Francis said the cardinal wanted it “to shine like a prophetic sign of freedom in the years when access to many houses of worship was forbidden. But with the sufferings he endured and offered to the Lord, he contributed to building another temple, even grander and more beautiful, the edifice of living stones which is you,” the pope told the faithful.

Archbishop Sviatoslav Shevchuk, major archbishop of Kiev-Halych and head of the Ukrainian Catholic Church, welcomed Pope Francis to the basilica. He said that while officially there are about 200,000 Ukrainians living in Italy, the number is probably double that. About 17,000 people attend the Divine Liturgy each week in one of 145 Ukrainian Catholic communities in Italy; they are served by 65 priests, the archbishop said.

The archbishop also said he hoped Pope Francis’ visit to the basilica would be just the first step toward a papal visit to Ukraine.

Pope Francis urged the community members to remember all those who suffered in Ukraine to preserve the faith and to hand it on, including mothers and grandmothers who baptized their children or grandchildren at great risk when Ukraine was under Soviet domination.

That same commitment to faith and desire to share it, he said, is seen today in the Ukrainian women who work for Italian families and become witnesses of faith to them.

“Behind each of you there is a mother, a grandmother who transmitted the faith,” the pope said. “Ukrainian women are heroic, thank the Lord.”

The war in Eastern Ukraine, which has been continuing for four years, also was on the minds and hearts of the pope and the Ukrainian faithful. Archbishop Shevchuk said that while “Russian aggression” continues, the international community has forgotten about the fighting.

Pope Francis told the Ukrainian community, “I know that while you are here, your hearts beat for your country and they beat not only with affection, but also with anguish, especially because of the scourge of war and the economic difficulties.

“I am here to tell you that I am close to you, close with my heart, close with my prayers, close when I celebrate the Eucharist,” the pope told them. “I beg the Prince of Peace to silence the weapons.”

Before leaving the basilica, Archbishop Shevchuk took Pope Francis down to the crypt to pray at the tomb of Bishop Stefan Chmil.

Earlier, Pope Francis told the people in the basilica that when he was 12 years old and then-Father Chmil, a Salesian, was ministering in Buenos Aires, he would serve Divine Liturgy for the priest.

Being an altar server three times a week, he said, he learned from Father Chmil “the beauty of your liturgy,” but also about what was happening in Ukraine under communism and “how the faith was tried and forged in the midst of the terrible atheistic persecutions of the last century.”

NEXT: ‘Slap’ away selfishness with examples of care, pope tells Red Cross