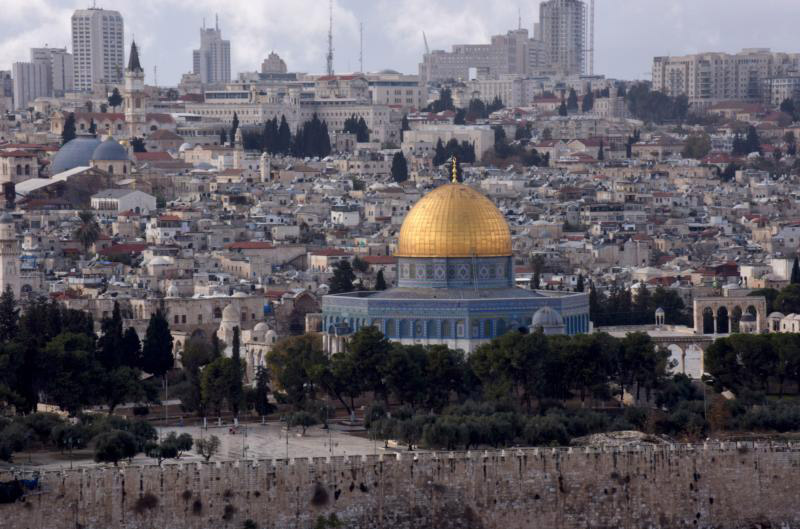 The gold-covered Dome of the Rock at the Temple Mount complex is seen in this 2017 overview of Jerusalem’s Old City. (CNS photo/Debbie Hill)

UPDATED – VATICAN CITY (CNS) — Christians, Muslims and Jews who are sincere about their faith must be committed to protecting the special character of Jerusalem and to praying and working for peace in the Holy Land, Pope Francis wrote in a letter to the grand imam of Egypt’s al-Azhar University.

Only a special, internationally guaranteed statute on the status of Jerusalem “can preserve its identity and unique vocation as a place of peace,” the pope wrote. And only when the city’s “universal value” is recognized and protected can there be “a future of reconciliation and hope for the entire region.”

“This is the only aspiration of those who authentically profess themselves to be believers and who never tire of imploring with prayer a future of brotherhood for all,” Pope Francis wrote in the letter to Sheik Ahmad el-Tayeb, the grand imam.

El-Tayeb hosted a meeting Jan. 17-18 with Christian and Muslim clerics and political leaders from 86 countries in reaction to U.S. President Donald Trump’s decision in December to recognize Jerusalem as the capital of Israel and to begin preparations to move the U.S. embassy there from Tel Aviv.

The sheik had invited Pope Francis to the meeting even though he knew the pope would be in Chile. Still, the pope said in his letter, “I assure you, I will not fail to continue praying to God for the cause of peace — a true, real peace.”

“In particular, I raise heartfelt prayers that leaders of nations and civil and religious authorities everywhere would work to prevent new spirals of tension and support every effort to make agreement, justice and security prevail for the populations of that blessed land that is so close to my heart,” the pope said in the letter, which was published Jan. 18 by the Vatican.

Pope Francis repeated the Vatican’s long-standing position calling for renewed peace talks between Israelis and Palestinians to find a negotiated agreement that would guarantee both could live in peace within internationally recognized borders “with full respect for the particular nature of Jerusalem, whose significance goes beyond any consideration of territorial questions.”

In their final statement, read by el-Tayeb, conference participants voiced “unequivocal rejection of the recent U.S. administration decisions which, in the eyes of the Arab, the Muslim world and the free world, are nothing but ink on paper.”

“All official and popular Arab and international (Islamic, Christian, Jewish) possibilities must be harnessed to end the unjust and oppressive Zionist occupation of the Arab Land of Palestine,” said the statement, which included the parenthetical material.

Conference participants called on the governments of the Islamic world, the League of Arab States, the Organization of Islamic Cooperation, the United Nations and civil society organizations “to swift and serious action to halt the implementation of the decision of the United States administration and to create global public opinion against these unjust policies.”

The Maronite Catholic patriarch, Cardinal Bechara Rai, spoke at the conference, reviewing the Vatican statements on Jerusalem. “Since the reign of Pope Pius XII, specifically since 1948, the popes have been standing alongside the Palestinian cause and demanding a just solution,” including on the status of Jerusalem, he said.

NEXT: At final Mass in Chile, pope says cry of migrants is prayer to God