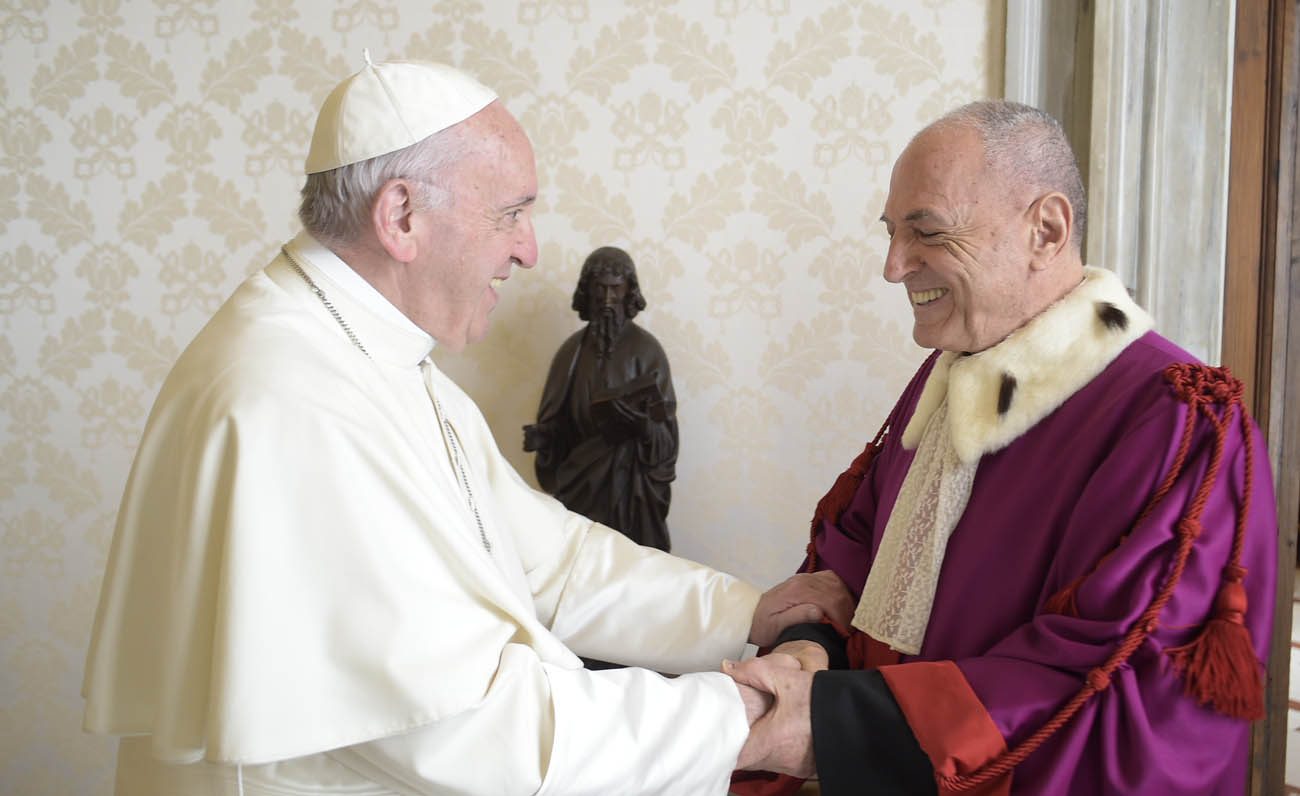 Pope Francis greets Msgr. Pio Vito Pinto, dean of the Roman Rota, prior to his annual address to members of the court at the Vatican Jan. 29. The Rota is the highest appeals court in the Catholic Church. (CNS photo/L'Osservatore Romano)

VATICAN CITY (CNS) — The Catholic Church must dedicate itself to properly forming and safeguarding the conscience of its faithful, especially young people so they can see God’s plan for the sacrament of marriage as a great joy for the church and all of humanity, Pope Francis said.

The recent synods on marriage and the family, as well as the apostolic exhortation on the family, “Amoris Laetitia,” were focused on “how to save young people from the uproar and deafening noise of the ephemeral, which leads them to reject taking on stable and positive commitments for the individual and collective good,” the pope said.

In a speech Jan. 29 to members of the Tribunal of the Roman Rota, which mainly deals with appeals filed in marriage annulment cases, the pope examined the central role conscience plays in the process of discerning the nullity or validity of the bond of marriage.

“The conscience takes on a decisive role in the demanding decisions engaged couples must face in accepting and building a conjugal union and family according to God’s plan,” he said.

That means all those involved in pastoral programs or ministry for marriage and the family need to dedicate themselves with renewed concern to helping engaged couples build and safeguard “the inner sanctuary of their Christian conscience.”

It is critical, the pope said, to help young people have a continuous experience of faith, hope and charity, so that they can recognize, “with a sure and clear conscience, that the conjugal union, open to the gift of children, is a great joy for God, the church and humanity.”

The conscience is that inner space “that only God enlightens and opens to life, if people let him in,” the pope said.

Pastoral activity dedicated to “the recovery, the protection and the care of a Christian conscience, enlightened by Gospel values,” he said, is “so priceless and urgent” right now.

It is a long and difficult task that must involve bishops and priests who “tirelessly work for enlightening, defending and upholding the Christian conscience of our people.”

The synods and exhortation made a key point, he said, about the “necessary relationship between the ‘regula fidei’ (rule of faith), that is, the church’s faithfulness to the magisterium that must not be touched, as it is in regards to the Eucharist, and the urgent attention of the church to the psychological and religious processes of all people,” who are called to choose a life of marriage, he said.

As discussed at the synods, a marriage catechumenate would be indispensable for reawakening the Christian conscience of young people and couples, he said. Fostering a lifelong, consistent formation, like with a “permanent catechumenate,” would be necessary so the conscience of every baptized Catholic always be open to “the light of the Holy Spirit.”

In this sense, the union of marriage “can be called true only if the human intention of the spouses is oriented toward that which Christ and the church wants,” he said. Guiding couples so they will be aware of this will require the work of all church leaders, religious and the lay faithful, he said.

Quoting from the teachings of Blessed Paul VI, the pope said that enlightening consciences according to the rule of the faith requires “avoiding the opposite extremes — both from those who appeal to tradition in order to justify their own disobedience to the supreme magisterium and to the ecumenical council” and from those who uproot themselves from the very heart of the church by “corrupting the genuine doctrine of the church.”

“Both attitudes are a sign of illicit and perhaps unconscious subjectivism” or else “obstinacy, stubbornness or mental imbalance. These are postures that wound the heart of the church,” he quoted Blessed Paul as writing in 1976.