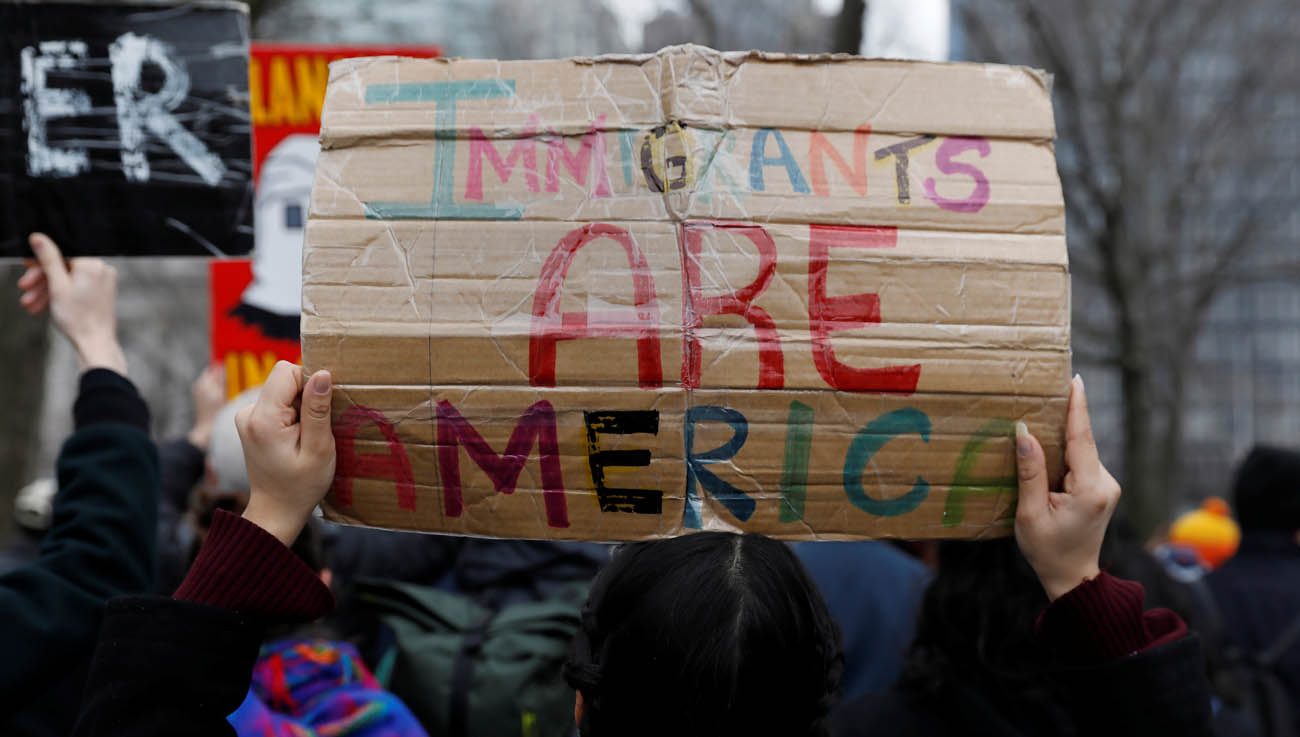 Activists and DACA recipients are seen in New York City Feb. 15. The group is walking 250 miles to Washington to demand Congress pass a "clean" bill with no conditions to save the Deferred Action for Childhood Arrivals program, such as the Development, Relief and Education for Alien Minors Act, or DREAM Act. (CNS photo/Shannon Stapleton, Reuters)

UPDATED – WASHINGTON (CNS) — Last September, as President Donald Trump pulled the plug on the Deferred Action for Childhood Arrivals program, he also gave Congress a March 5 deadline to find a permanent legislative solution that would help some 800,000 young adults living the U.S. who were brought into the country without legal permission as children.

As the deadline approaches, with no legislative solution in sight for DACA, the U.S. Catholic bishops and other Catholic leaders as well as Catholic organizations from around the U.S. have been loudly clamoring for relief for the young adults.

So far, lawmakers have failed to deliver any solution even as the deadline approaches and the president’s repeal of DACA gets tangled up the courts. Some beneficiaries already face deportation and the loss of permits that allow them to work, drive and attend school.

On Feb. 23, officials of the U.S. Conference of Catholic Bishops again urged all U.S. Catholics to participate a “National Catholic Call-In Day to Protect Dreamers” they have declared for Feb. 26. Participants can call lawmakers by calling (855) 589-5698 and visiting the DACA and DREAMER page for resources in English and Spanish. The phone number is for the Capitol switchboard’ callers press “1” to connect to senators and “2” to connect to representatives.

“With the March 5th deadline looming, we ask once again that members of Congress show the leadership necessary to find a just and humane solution for these young people, who daily face mounting anxiety and uncertainty,” said a joint statement from Cardinal Daniel N. DiNardo of Galveston-Houston, USCCB president; Archbishop Jose H. Gomez of Los Angeles, USCCB vice president; and Bishop Joe S. Vasquez of Austin, Texas, chairman of the USCCB Committee on Migration.

They are asking Catholics to contact their members of Congress to urge them to: “Protect ‘Dreamers’ from deportation; to provide them a path to citizenship; and to avoid any damage to existing protections for families and unaccompanied minors in the process.”

In the Archdiocese of Los Angeles, a Mass dedicated to Dreamers will be celebrated at Our Lady Queen of Angels Church in Los Angeles Feb. 25. It will include testimonials from Dreamers, as DACA recipients are known.

San Francisco Archbishop Salvatore J. Cordileone made two videos, in English and Spanish, urging participation in the Feb. 26 call-in day. The archbishop’s videos can be viewed at here and here.

In his video message, Archbishop Cordileone said Catholics need to call members of Congress to demand “a legislative fix for DACA, so our brothers and sisters, young people who are here without proper documentation, can get on a track for citizenship and continue contributing to our country, to ask as well for reform of immigration policy that will favor keeping families together. Families are the basic unit of society and society stands and falls on family unity.”

In the Archdiocese of Santa Fe, New Mexico, Archbishop John C. Wester issued his second action alert in a week asking Catholics in the state to participate in the national call-in day.

“As Catholics, we believe the dignity of every human being, particularly that of our immigrant and refugee children and youth, must be protected,” he said in a late Feb. 22 statement. “The sanctity of families must be upheld. The Catholic bishops have long supported undocumented youth brought to the United States by their parents, known as Dreamers, and continue to do so.

“We ask you to engage with your elected officials to voice your support for these young people and call on your members of Congress to find a bipartisan legislative solution to protect Dreamers immediately,” added the archbishop, who also pointed Catholics to a video of Bishop Vasquez discussing the issue.

To help tell the story of DACA recipients, the Archdiocese of Santa Fe also calling attention to a music video by the local band Reviva that depicts agents with the U.S. Immigration and Customs Enforcement picking up three workers, including a teacher and a construction worker. Its message reflects that reality some in the country are facing.

Workers are handcuffed and taken into custody in the “Take Me Away” video, as a little girl arrives home from school to find her parents gone. The songwriter graduated from St. Pius X High School, a Catholic school in Albuquerque, New Mexico, and the University of Notre Dame in Indiana.

The Ohio-based Association of U.S. Catholic Priests urged its members to fast and pray, but also to call their lawmakers in Washington asking that Congress pass permanent relief for the young adults affected. The group also asked priests to encourage their parishioners to take part in personal and public actions on behalf of DACA.

In a Feb. 21 newsletter, the association asked its members via email to “fast on Fridays in union with Father Gary Graf, the Chicago priest who has been fasting in support of Dreamers every day,” and to support Father Ray Pineda, an ordained priest in Atlanta, who has benefited from DACA and also is facing an uncertain future in the country.

Father Graf has announced he will march in front of the White House for 40 hours straight, from 9 a.m. (local time) March 4 through 5 p.m. March 5. The priest said it will be his final attempt to encourage Trump to extend DACA. As he marches he will hold placards illustrating the number of Dreamers who are losing their status per day, 916, and per week, 6,412. By the end of March, he said, 25, 648 will have lost DACA status.

Hundreds of Catholic leaders have declared Feb. 27 a “Catholic Day of Action” in Washington and planned to pray and sing inside the Russell Senate Office Building.

A news release that the group of leaders includes women religious, who will call on House Speaker Paul Ryan of Wisconsin, a Catholic, to remember Catholic social teaching about the obligation to protect immigrants, and lead House Members in passing a clean DREAM Act.

The measure — the Development, Relief and Education for Alien Minors Act — has long been proposed. The bill is what gives DACA recipients the “Dreamer” name.

The USCCB also has created a series of videos available on its YouTube channel and Facebook page.