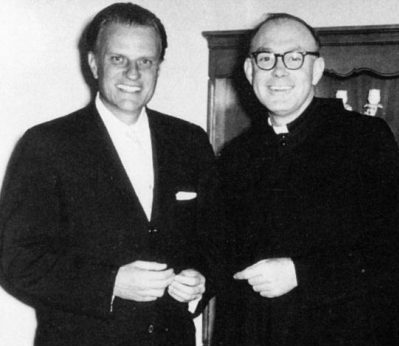 For many colleges, the strategy then, as it is today, was to invite well-known speakers to the campus to give a talk, sometimes in exchange for an honorary degree.

The late Benedictine Father John Oetgen, a past president of the college and a monk of the Belmont Abbey Monastery, had a groundbreaking idea: invite the extremely popular evangelist the Rev. Billy Graham to the school for a talk and a degree.

Rev. Graham, who was born in Charlotte, accepted. The groundbreaking part was that the Baptist preacher had never before been invited to speak at a Catholic institution.

“That was seen as quite a startling move — both that Billy Graham would accept and that we would confer the (honorary) degree,” said Benedictine Abbot Placid Solari in Father Oetgen’s obituary. “That sounds strange now, but it was a forward-looking gesture at that time on both parts.”

A 1967 account of the event from the Gaston Gazette in Gastonia quotes Rev. Graham as relishing the opportunity to speak to Catholics. He called it “a time when Protestants and Catholics could meet together and greet each other as brothers, whereas 10 years ago they could not.”

History professor Frank Murray, who was just starting his 50-year tenure at the school, recalled: “Dr. Graham spoke in the Haid and it was more packed than I had ever seen.” At that time the Haid building was the school’s main nonliturgical gathering area for students.

Rev. Graham’s talk was open to the public and nonstudents flocked to the school. “I have never seen so many bibles on the Belmont Abbey campus,” quipped Murray.

Father Oetgen introduced the evangelist: “We welcome Dr. Graham here tonight. Because of his presence we have received great praise and recognition nationally.”

But not all of the recognition was positive. A slew of websites that can be found by using the search term “Billy Graham and Belmont Abbey” are harshly critical of Rev. Graham’s association with the Catholic Church that began at the Benedictine Abbey in Belmont.

Rev. Graham often began his talks with some gentle humor. At the abbey, Murray said that the preacher joked around saying, “I’m not sure but this could start me being called ‘Father Graham.'”

Rev. Graham was not alone in thinking like that. Murray, who was seated among the monks who were also members of the faculty, overheard one of them say, “Wouldn’t it be marvelous to put a habit on this man and take him into the monastery?”

In retrospect, Rev. Graham’s talk that day answered his critics by quoting the well-known first verse of the Book of Ecclesiastes: “Vanity of vanities, all is vanity.”

On a more serious note, Murray recalls that Rev. Graham recognized the ecumenical gravity of the invitation from Belmont Abbey. “I consider this a new stage in my ministry,” said Rev. Graham.

Murray said Rev. Graham’s speech was a blessing both for the college and for Christianity. “He was open to everyone,” he said.

Did the speech put Belmont Abbey on the map as Father Oetgen intended? Murray said yes. “In every possible way.”

Rev. Graham went on to speak at many other Catholic institutions, and in the late 1970s he had his first of several meeting with the pope. In that meeting, St. John Paul II renewed Rev. Graham’s call to ecumenical friendship by calling the Charlotte native “a brother.”

Father Oetgen, who according to Murray was never at a loss for words, thanked Rev. Graham by saying, “Instead of praise, we should be blamed for not inviting Dr. Graham a long time ago.”

Hains, director of communications for the Diocese of Charlotte, writes for the Charlotte News Herald, the diocesan newspaper.

NEXT: As DACA deadline nears, Catholic voices speak up to fix immigration woes