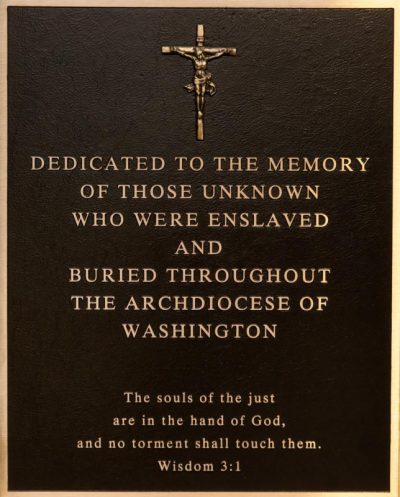 This is one of the bronze memorial plaques the Archdiocese of Washington will install this spring at its five major Catholic cemeteries to honor the unknown enslaved men, women and children buried throughout the archdiocese, which includes the District of Columbia and five surrounding Maryland counties. (CNS photo/Daphne Stubbolo, Archdiocese of Washington)

Washington’s archbishop sprinkled holy water on the plaques during a Feb. 3 Mass at the Basilica of the National Shrine of the Immaculate Conception.

“We have gathered today to begin to right a wrong and correct a failure — a serious and unjust failure,” the cardinal said in his homily. “It seems that over decades and decades, not to say centuries, our brothers and sisters in the faith who were enslaved, who lived in human bondage, were treated with the same inequity at their burial. Many received no public marker … what we have come here to do today is to see that here and now all are properly remembered.”

The inscription on the plaques reads: “Dedicated to the memory of those unknown who were enslaved and buried throughout the Archdiocese of Washington.” The top of each plaque has an image of Christ crucified on the cross, and the bottom includes a quotation from Wisdom 3:1: “The souls of the just are in the hand of God, and no torment shall touch them.”

The Mass opened with the St. Augustine Gospel Choir singing the spiritual “We’ve Come This Far by Faith.” St. Augustine Parish — the mother church for African-American Catholics in the nation’s capital — was founded in 1858 by free men and women of color, including some who were emancipated from slavery.

Washington Auxiliary Bishop Roy E. Campbell Jr., who is African-American, welcomed people to the Mass and said that the enslaved men and women who had once been buried in unknown, forgotten graves “will now be honored in death, with the Christian and human dignity that they were not afforded during their lifetimes.”

In his homily, Cardinal Wuerl said blessing the plaques offered a “simple gesture and solemn moment.”

“We make a visible and permanent declaration that, in ground made holy by their remains as a temple of the Holy Spirit, we mark and remember them,” the cardinal said.

Catholic funerals and burial sites, he said, reflect “our belief in the resurrection of the dead and the life of the world to come.” He added that Catholic cemeteries “provide us with holy ground where we can, with some regularity, remember our dead, recall their goodness to us and ask God’s blessing on them.”

With that understanding, he said the Catholic Church of Washington had gathered that day as the markers were blessed in recognition that “with this marker, in whatever cemetery it stands, we recognize that somewhere in this burial space are the remains of brothers and sisters. With this memorial, we honor their memory.”

Cardinal Wuerl said, “May our presence say loudly that this is one small effort to right what was a very great wrong.”

He quoted from his November 2017 pastoral letter, “The Challenge of Racism Today,” saying: “Today we need to acknowledge past sins of racism and, in a spirit of reconciliation, move toward a church and society where the wounds of racism are healed.”

“Each step forward we take,” he said in his homily, “is a step that the next generation — your children and their children — will not have to take again.”

Cardinal Wuerl praised the witness of faith of generations of “African-American Catholics who kept the faith through eras of enslavement, segregation and societal racism,” and who remained “steadfastly faithful” to the Lord, his church and his creed.

That remark drew applause from the congregation, which included people of diverse racial and ethnic backgrounds. Some African-American Catholics seated in a front section of the basilica wore colorful sashes made of kente cloth to reflect their African ancestry.

“In Christ, we are brothers and sisters to one another,” the cardinal said, noting that people in their shared earthly pilgrimage to heaven, should move forward together with faith in God’s grace, with hope and determination, “and above all with love for each other as children of God,” recognizing “in baptism, in Christ’s church, we are all brothers and sisters.”

Blessing the markers, he said, not only involved honoring those from the past, but also looking to the future.

“We renew, once again, our pledge to strengthen our efforts to live that communion of faith and love,” the cardinal said. “We affirm our common heritage in baptism and the call to live it out in a solidarity of respect, equality and dignity.”

NEXT: Catholics gather on Hill to pray lawmakers will protect the Dreamers