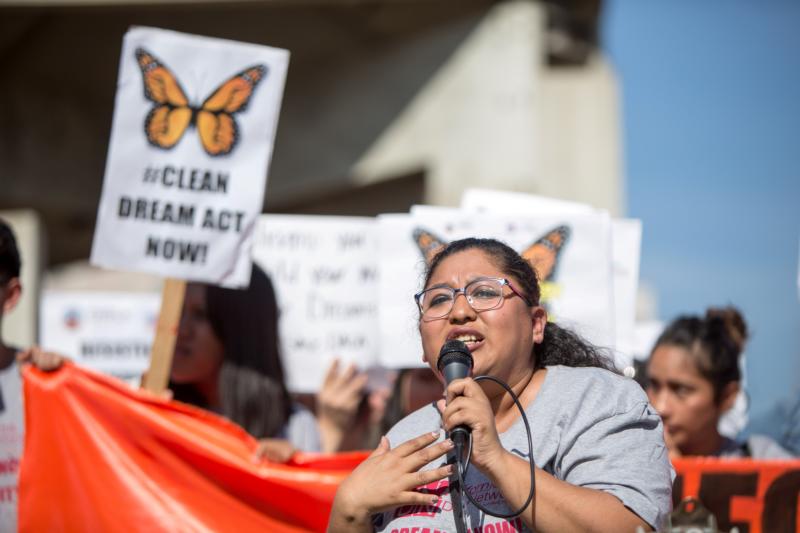 Rosa B., 23, a recipient of the Deferred Action for Childhood Arrivals program, who was brought to the U.S. when she was 4, speaks during a Feb. 3 rally in Los Angeles in support of a permanent legislative solution for immigrants. Cardinal Joseph W. Tobin of Newark, N.J., says religious leaders need to stand with immigrants and help the flock see their dignity. (CNS photo/Monica Almeida, Reuters)

WASHINGTON (CNS) — At the forefront of the immigration battle in the U.S., few Catholic Church leaders have been as physically present in supporting the most vulnerable in that group as Cardinal Joseph W. Tobin of Newark, New Jersey.

Last year, he intertwined his hands with those of a 59-year-old Mexican grandfather facing deportation after 25 years in the country. He prayed with him en route to a deportation hearing, where he was later granted a stay.

In 2015, he was involved in a very public difference of opinion with then-Indiana Gov. Mike Pence, who had asked the prelate, then archbishop of Indianapolis, not to help resettle a Syrian refugee family in the state. Pence withdrew state funding that would have helped the family, but the archbishop still found a way and Catholic Charities moved in to facilitate the resettlement of the mother and father and their two children seeking refuge.

Cardinal Tobin recounted those moments and explained why helping immigrants and refugees is at the heart of the Christian ethic during a Feb. 5 visit to Georgetown University, where he spoke to a class and participated in the “Dahlgren Dialogue” series of talks with two students, one who came to the U.S. as a refugee and the other brought to the U.S. as a child without legal documentation.

“For Christians, our religious outlook embraces a story that is essentially a migration story, that the first migrant is God,” said Cardinal Tobin during a media briefing before the event, adding that Jesus left God’s glory and essentially migrated to become part of humanity. On earth, he suffered persecution leading him to migrate to Egypt, seeking safety just as millions of people around the world do today, the cardinal said.

We forget where we came from, not just as the early Christian church, but also as a country, when early Catholic immigrants in the 19th century were treated and portrayed in the U.S. “as apes and drunkards and ignorant and threats to God-fearing women and children,” Cardinal Tobin said.

What drove him to attend the immigration hearing for the 59-year-old grandfather last year was similar “rhetoric about the bad hombres and rapists and the drug traffickers.” Those words were “taking away people’s faces and replacing them with a caricature,” much as others had done, denigrating Catholic immigrants to the U.S. in the past, the cardinal said.

He went “just to be with him, to pray with him (and others) … to pray for a softening of hearts,” as the immigrant, Catalino Guerrero, faced what must have felt like a steamroller, and the cardinal along with other religious leaders wanted to offer him kindness.

“One thing I’ve learned is the terrible fear people live under, not only fear of the names that they’re called, ‘rapists, terrorists,’ but fear, the very practical fear of being removed from their families,” Cardinal Tobin said.

He worries about the aggressive enforcement by authorities and that a possible immigration deal in the works — in exchange for protecting young adults brought by their parents to this country as children without legal documentation — may harm other groups of immigrants.

“I’m very concerned, and I think that I’m not simply being hysterical, but if you examine the budget proposals, the administration is preparing for a mass deportation,” he said. “And I think that if we accept a deal uncritically, thinking that’s all we can get, we may be actually establishing a foundation that will result in greater harm.”

The U.S. Catholic bishops, following Pope Francis’ lead, have shown “a remarkable degree of unanimity” on the obligation to defend immigrants and refugees, he said. As pope, Francis is “doing what the Second Vatican Council asked us to do: to read the signs of the times and places in the light of faith,” the cardinal said.

When 65 million people around the world fit the definition of refugees set out by the United Nations, if you factor in immigrants, one in every 42 people on earth is a refugee or an immigrant, he said. That’s a sign of the times to which the church must respond.

“They’re not leaving their home countries on a whimsical desire to see the world,” Cardinal Tobin said.  “They’re (running) for their lives, either from actual physical violence or terribly numbing misery.”

So, it’s disheartening to see the United States do much less to help them than smaller countries are doing, he said. Lebanon, for example, has taken in 2 million refugees, while the U.S., under the Trump administration, said last year it would admit no more than 45,000 refugees in 2018.

“Countries with weaker resources than the U.S. welcome these people and do their best to help them,” the cardinal said, adding that when you see such kindness, “you cannot help but be impressed with the hardness of heart that’s becoming more manifest in public discourse” in the United States.

He blames that hardness of heart on those who prey on the fears others may be experiencing as they’re trying to deal with changes in the world, particularly those brought about by globalization, and which may include stagnant wages and other economic disparities.

“Possibly the most nefarious feature of globalization (is what) you can’t see,” the cardinal said. “Things like massive currency transfers or manipulation of markets. You can’t see that. What you can see are these poor people who have come from another place.”

And some may believe that those people “must be the reason why my life is not happy,” Cardinal Tobin said.

The church’s role is to reduce that fear, he said, and one way to do that, the cardinal believes, is to “put a face,” on immigrants and refugees.

He referred to a book he borrowed from his sister when he was young, about the Allies’ bombing policy in World War II. As the war worsened and the stakes rose, the book pointed out, the propaganda had to change to make the Germans and Japanese appear less than human, making it easier to bomb civilians. Some of the rhetoric being used today against immigrants and refugees serves the same purpose, to dehumanize them, he said.

“If we recognize the humanity of a person, we find it much more difficult to treat them inhumanely,” Cardinal Tobin said. “I think it’s important that religious leaders stand with immigrants, to put a face on them so that people who want to do inhumane things know what they’re doing.”