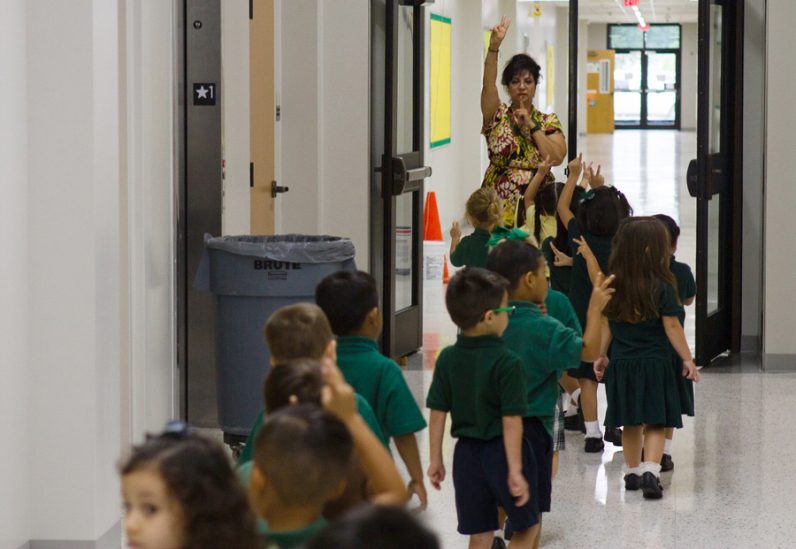 Debra Garza leads prekindergarten students on the first day of school in 2017 at St. Helen Catholic School in Pearland, Texas. Interviewed in the wake of the gun massacre at Marjory Stoneman Douglas High School in Parkland, Fla., Catholic school officials say they understand the need to review safety procedures and urge students to be responsible for each other. (CNS photo/James Ramos)

WASHINGTON (CNS) — Eight days after the school shooting in Parkland, Florida, a Catholic high school more than 1,000 miles away conducted an active shooter training — planned two months ago — that suddenly had added urgency.

Reinforcement of safety drills and discussion and training about how to respond to crisis situations is something schoolteachers and administrators in public and private schools across the country have long been accustomed to since the 1999 school shooting at Columbine High School in Littleton, Colorado.

Catholic schools have not experienced mass shootings, but school leaders know they are not immune to these dangers and stress the need to be continually vigilant by reviewing safety procedures and urging students to be responsible for each other.

Days after the Florida shooting, Catholic school leaders received a link to the U.S. Department of Education’s resource guide for school emergency plans. Dominican Sister John Mary Fleming, a member of the Dominicans’ St. Cecilia Congregation in Nashville, Tennessee, and executive director of the Secretariat of Catholic Education of the U.S. Conference of Catholic Bishops, sent the link in an email along with the message that she knew many of them were reviewing their crisis and emergency plans in their diocesan and school communities.

But just having a plan in place doesn’t mean a school can rest easy. And over the years, through learning from how school shootings have been handled, some safety plans have changed.

Marco Clark, president and CEO of Bishop McNamara High School, and a graduate of the school, said that years ago if there was a school intruder, the policy was to read a lockdown code over the public announcement system that only those in the school would know about. At this coed high school, for example, the announcement would ask Brother Walter (a former principal) to come to the office. This code would let those in the school know there was an intruder on the campus but didn’t let the intruder know that the school knew of his or her presence.

Now, Clark said, that has all changed. If there is an intruder, the school will be informed directly about what is happening and will be given as much information as possible over the loudspeaker.

He also said in years past, safety training used to emphasize students getting under some kind of cover, which doesn’t make sense in the case of an active shooter, so teachers and students are urged to consider where they would go or how they would respond if a shooter entered a classroom.

In upcoming weeks, the school planned to have a similar training session for students, but for now, teachers and administrators were doing everything they could to assure the students’ safety and to answer their questions. Clark said there was “heightened anxiety” in the wake of the Feb. 14 shooting at Marjory Stoneman Douglas High School but it didn’t change his opposition to arming teachers with guns or installing a metal detector at the school’s entrance.

He said the school planned to continue doing what it has always done: have administrators greet students at the door, urge students to be aware of anything not right and report it, and work closely with the local police department and community members.

“Parents place a lot of trust in our school, a sacred trust,” he told Catholic News Service just hours after the training session.

She said the sense of safety could be in part because Catholic schools are typically smaller than public schools and students and faculty know each other better. Catholic schools also often do not have open campuses where students can leave during lunch and come back. She said they also emphasize from early grades the need to be “your brother’s keeper” so that in class or a team, if something is wrong with a student, the other students have a “moral responsibility to step up to the plate” and do something which strengthens the school’s sense of family.

Sister Mary Angela Shaughnessy, a Sister of Charity of Nazareth and an expert on school safety, has been giving talks for years about what Catholic schools need to do to be safe.

Currently a senior distinguished fellow at Loyola Marymount University’s Center for Catholic Education, Sister Shaughnessy is sure that all Catholic schools are on board now with safety audits and procedures. She said the only school shooting at a Catholic school since Columbine was a 2001 shooting at a rural Catholic high school in Pennsylvania where a 14-year-old girl shot a classmate in the cafeteria.

But that’s not to say there haven’t been threats to Catholic schools. She pointed out that there was one in January in Toledo, Ohio, when a local high school and St. John’s Jesuit High School closed for a day after threats were made against both schools on social media by a 14-year-old who faces two felony counts of making terrorist threats.

Sister Shaughnessy said “Catholic schools have been blessed” to not have school shootings and she attributes it to active parents and the fact that Catholic schools can be selective in who attends their schools, but she also thinks they aren’t immune and shouldn’t let their guard down. She said schools must continue to involve parents, students and communities, without scaring anyone but to keep everyone alert of potential dangers and responses.

Charlotte Catholic High School in Charlotte, North Carolina, did just that Feb. 15, the day after the Florida school shooting.

In a school assembly the students prayed for the Parkland students and their families and they were reminded about the school’s safety plan and the need to take it seriously. A letter sent home to parents from the principal stressed that the students must be responsible for each other, speaking up when they suspect a student may harm himself or wish to harm others.

“We are a family, and this is what we do for each other,” said the school’s principal, Kurt Telford.

In a separate letter to parents, Janice Ritter, superintendent of schools for the Charlotte Diocese, emphasized that student safety is a top priority.

“As we look at the events taking place throughout our country and our world, I think we all realize, that even with advanced security measures and careful implementation, not every tragedy can be anticipated or prevented. However, we will continue to be conscientious and diligent in our safety and security measures.”

NEXT: Back to work after recess, members of Congress get calls on DACA