Back to work after recess, members of Congress get calls on DACA 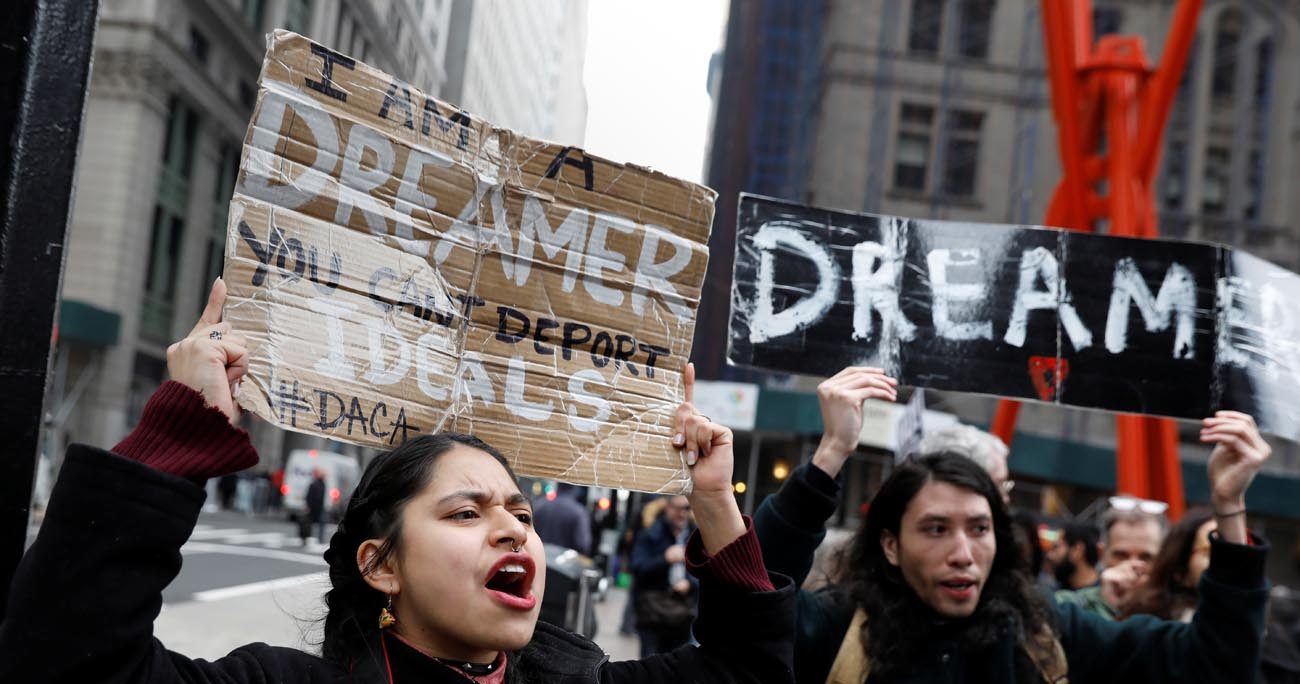 Activists and recipients of the Deferred Action for Childhood Arrivals, or DACA program, march up Broadway in New York City Feb. 15 during the start of their "Walk to Stay Home," a five-day 250-mile walk from New York to Washington to demand that Congress pass a clean DREAM Act to save the program. (CNS photo/Shannon Stapleton, Reuters)

UPDATED – WASHINGTON (CNS) — As Congress reconvened after a 10-day recess, members of both chambers received calls from Catholics around the country Feb. 26 urging them to find a legislative solution to save the Deferred Action for Childhood Arrivals program, known as DACA.

In announcing the “National Catholic Call-In Day to Protect Dreamers,” officials of the U.S. Conference of Catholic Bishops asked all Catholics to call their members of Congress and press them to protect Dreamers from deportation, provide them a path to citizenship and avoid any damage to existing protections for families and unaccompanied minors in the process.

The communications manager for the USCCB’s Migration and Refugee Services said Feb. 27 that more than 45,000 calls were made to members of Congress.

Church leaders were among those making calls. Chicago Cardinal Blase J. Cupich, who called Illinois senators and a representative, spoke with Democratic Sen. Dick Durbin, left a voice message for Democratic Sen. Tammy Duckworth and spoke with an aide for Republican Rep. Rodney Davis, according to the Chicago Catholic archdiocesan newspaper.

Congress must protect “our young immigrant neighbors who want nothing more than to continue to contribute to the nation they call home,” Cardinal Cupich said in a statement in advance of the call-in effort. He urged Catholics in the Chicago Archdiocese to take part in the event, citing “our heritage as an immigrant community.”

On the heels of the “National Catholic Call-In Day,” hundreds of Catholic leaders held a “Catholic Day of Action” on Capitol Hill in Washington Feb. 27. After an outdoor news conference, some participants went inside the Russell Senate Office Building to sing and pray and risk arrest. Several were arrested by members of the U.S. Capitol Police.

The Catholic Legal Immigration Network estimates that 122 Dreamers with DACA status “are losing their ability to work every day that Congress doesn’t provide a legislative solution. That number will increase rapidly when the program officially ends on March 5.”

The same day as the national call-in, the U.S. Supreme Court declined to hear and rule on whether the administration has the right to shut down DACA.

In September, President Donald Trump announced his administration was ending the program, giving lawmakers until March 5 to find a legislative solution to protect the young adults benefiting from DACA.

Two federal judges blocked the Trump administration’s efforts to end the program, ruling the government must continue to accept renewal applications for DACA. In turn, the administration asked the Supreme Court to hear and rule on one of those decisions, from a judge in California, in an effort to bypass the process of an appeal going through the 9th U.S. Circuit Court of Appeals based in San Francisco.

The case will now be heard on appeal by the 9th Circuit. But regardless of that setback for the Trump administration, “it does not change anything,” said Archbishop Jose H. Gomez of Los Angeles.

“Congress has the responsibility to make immigration policy. It is long past time for members of Congress to take their responsibilities seriously — seriously enough that they are willing to act with courage to negotiate and seek compromises and resist the temptation to keep using this issue for their political advantage,” he said in a statement.

Immigration advocates have long urged Congress to pass a “clean” bill to preserve DACA, without amendments providing for various immigration reforms. It’s called the DREAM Act — the Development, Relief and Education for Alien Minors Act — and it is what gives DACA recipients the “Dreamer” name.

Archbishop Gomez was one of the three USCCB officials who announced the national call-in effort Feb. 19. As USCCB vice president, he joined with Cardinal Daniel N. DiNardo of Galveston-Houston, USCCB president, and Bishop Joe S. Vasquez of Austin, Texas, chairman of the USCCB Committee on Migration.

“We ask once again that members of Congress show the leadership necessary to find a just and humane solution for these young people, who daily face mounting anxiety and uncertainty,” they said in their joint statement.

In his Feb. 26 statement, Archbishop Gomez said: “People’s lives and families’ futures hang in the balance. Now is the time to pass legislation that enables the Dreamers to become citizens and full contributing members of our society.”