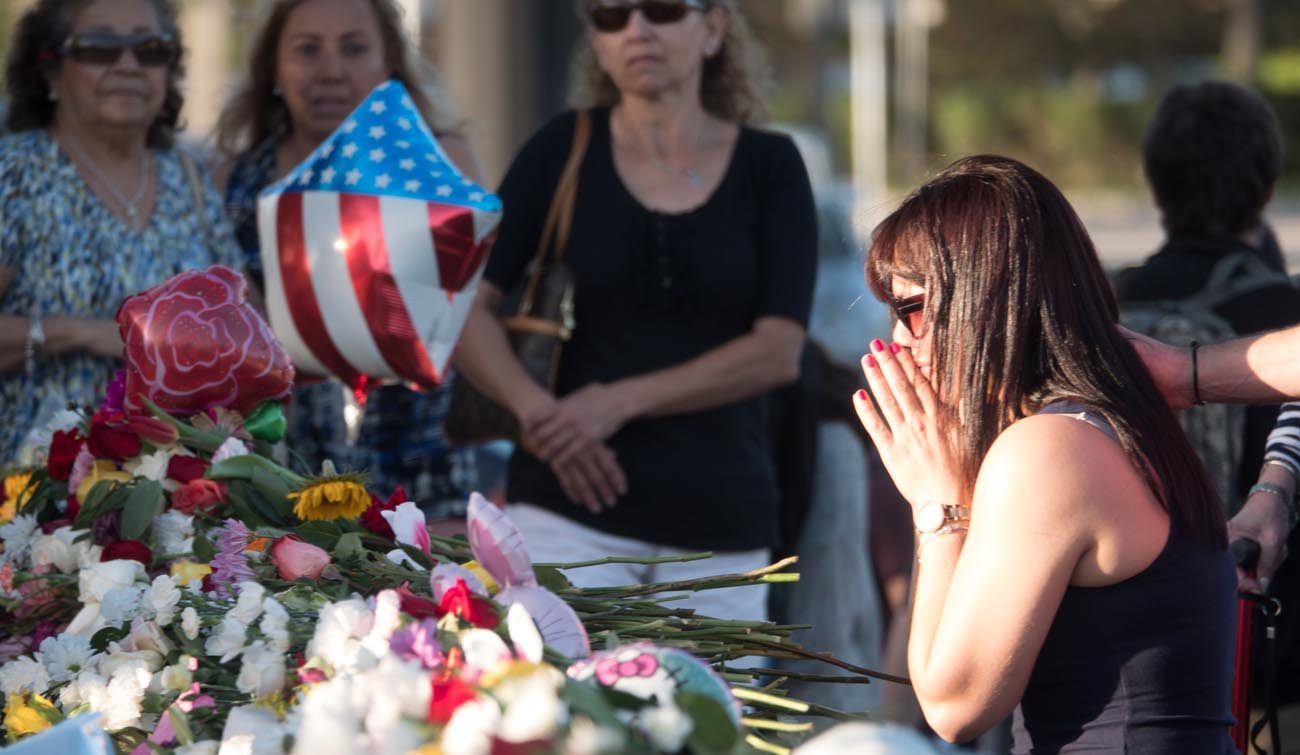 A woman prays at a memorial where well-wishers placed mementos as hundreds of students and parents arrive for campus orientation Feb. 25 at Marjory Stoneman Douglas High School in Parkland, Fla. Attendance at the orientation was voluntary but it was being held in anticipation of the school officially reopening Feb. 28. (CNS photo/Angel Valentin, Reuters)

WASHINGTON (CNS) — Students in schools across the country have to navigate their way around classes, exams, relationships, cliques, cafeteria food and crowded hallways.

They also have to think about what they would do if someone with a gun came into their school, which seems all the more possible after the Feb. 14 shooting at Marjory Stoneman Douglas High School in Parkland, Florida.

The students there now enter brand-new terrain that only students from schools where mass shootings have taken place have any idea about. When classes resume at Stoneman Douglas on a modified schedule Feb. 28, they will face all their usual routines and challenges right up against the horrific memories of the fear and loss of just two weeks before.

At first, many of these students channeled their raw grief into gun control activism. They gave speeches at vigils and numerous television interviews; they marched and planned bigger marches. They challenged political leaders and businesses associated with the National Rifle Association to do more to stop the carnage they had witnessed. They coined a movement name — #NeverAgain — and spread its message on social media.

But these students — for all their passion and eloquence on camera – also have admitted to reporters that they have a hard time sleeping, or don’t want to be alone or are afraid of sudden noises.

And all of that and more is straight out of books and studies on post-traumatic stress symptoms after what they just experienced.

“What these students have gone through is unfathomable. I think it will be incredibly difficult to cope and move on,” said Rachel Annunziato, an associate professor of psychology at Jesuit-run Fordham University in New York. She said each student will have to find the support they need and to try different coping strategies. For now, she said: “the activism they are showing is heroic and may well help with coping as it could decrease a sense of helplessness and it also strengthens their support network.”

The high school has provided grief counselors to students and families since the shooting took place and Annunziato said that will need to continue.

“Some people, miraculously, are very resilient,” she said, but others can have a harder time and need help to connect with others to find healing.

She also told Catholic News Service that the impact of this shooting extends far beyond Parkland, as also was proven by research after the 9/11 terrorist attacks when those impacted by the events were not just the people who directly experienced it. For example, her own 7-year-old sons in New York have talked about the school shooting in Florida and said the students are scared.

Marco Clark, president and CEO of Bishop McNamara High School in Forestville, Maryland, just outside of Washington, said his students had “heightened anxiety” after the Parkland shooting and were talking with teachers about what they should do in a similar situation.

The day after the shooting, the National Catholic Educational Association issued a statement with a link to a prayer service in response to a school shooting and articles about how to talk to kids about these events and turning to God in times of tragedy.

As students nationwide — and particularly in Parkland — consider moving forward, there is one person with particular insight into this situation.

Frank DeAngelis, principal at Columbine High School from 1996 to 2014, was principal at the Littleton, Colorado, school during the 1999 school shooting that killed 12 students and one teacher. Recently retired, he is now an international speaker about school violence and its impact on communities.

USA Today reported that he already has given some advice to Ty Thompson, the Stoneman Douglas principal, telling him: “It’s the things you don’t even think about, things that will trigger the emotions. Teachers won’t know what to expect. It’s a day-by-day experience.”

And the day before the Florida shooting, DeAngelis, who is Catholic, gave a talk at Gregorian Court University, a school founded by the Mercy sisters in Lakeland, New Jersey.

He told students and faculty not only about the horror of the 1999 school shooting but also of the long and difficult road to recovery afterward, even for him.

He said he struggled with survivor guilt — and still does. He wasn’t even sure he would make it after the shooting but was urged on by his pastor, Msgr. Kenneth Leone of St. Frances Cabrini Parish in Littleton.

The priest, who is now retired, told Angelis he had a “spiritual imperative” to rebuild the community. That inspired him at first to stay at the job until 2002, when all the students in the freshman class of 1999 graduated, but he ended up continuing as principal until 2014, when the children who were in their earliest school year in 1999, graduated.

At the New Jersey college, the retired principal said a key aspect to finding healing at the high school so marred by tragedy was reaching out to those who felt marginalized.

To illustrate that each student was “loved and included and that they were an indispensable link,” he gave each one a link in a chain that they forged together.

Today, he said, the chain remains for all to see in a prominent place in the school.

Contributing to this report was Lois Rogers, who writes for The Monitor, newspaper of the Diocese of Trenton.

PREVIOUS: Back to work after recess, members of Congress get calls on DACA