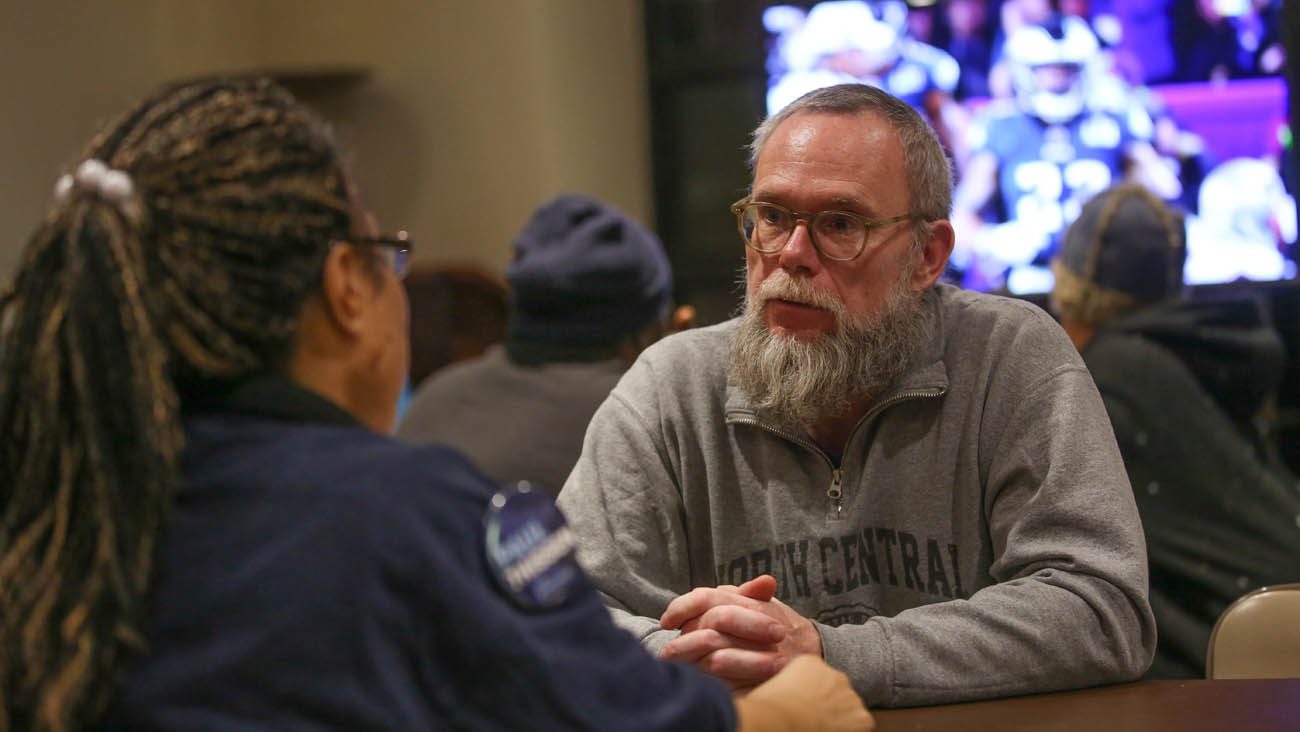 Larry Ligocki, a volunteer at St. Olaf Church in Minneapolis, talks with a homeless guest during a Super Bowl party Feb. 4. A church-run shelter near U.S. Bank Stadium, the site of the big game, was temporarily moved to St. Olaf so that guests could be outside of a secure area surrounding the stadium. (CNS photo/Dave Hrbacek, The Catholic Spirit)

MINNEAPOLIS (CNS) — A woman exclaimed, “Right there, that’s what I thought!” as she watched Philadelphia Eagles quarterback Nick Foles throw the first touchdown of the Super Bowl Feb. 4.

Watching the game on a TV at St. Olaf Church in downtown Minneapolis, she cheered all the more when the Eagles were on defense, exclaiming “don’t let them get a touchdown” as they held the New England Patriots to a field goal on their first drive.

Later, she yelled, “Yes,” as the Eagles broke up another pass by Patriots quarterback Tom Brady. The Eagles went on to beat the Patriots 41-33.

The woman, whose first name is Niiki, and 57 other homeless guests spent Feb. 1-4, Super Bowl weekend, at St. Olaf. Their stay concluded with a party for the game on their last night. They moved to St. Olaf for the weekend to accommodate the temporary closure of First Covenant Church’s shelter, run by St. Stephen’s Human Services, due to its close proximity to U.S. Bank Stadium, where the game was played, and the surrounding security perimeter.

“It went pretty smoothly. Folks were in pretty high spirits for most of the weekend,” said Michelle Perrin, a shelter advocate for St. Stephen’s Human Services.

Around 20 volunteers from St. Olaf served food throughout the weekend and visited with guests. Guests slept on mattresses, moved from First Covenant, in the St. Olaf social hall, a large room adorned with ceiling chandeliers and ornate candle wall sconces.

“This location is spectacular,” said Shawn, one of the guests. “I know this is a banquet room where I’m (staying), but they made it work.”

Stephany, also a guest, said she would look at the chandeliers as she fell asleep. She also found something more than a good night’s rest.

“I was really at peace when I came here,” Stephany said. “They (St. Olaf) had a lot of volunteers to just sit down and speak with you.”

Stephany said part of homelessness for her has been a healing process, which began with getting away from a domestic violence situation. Shawn’s path to homelessness resulted from rent payment issues. Melissa, a Boston native and Patriots fan, has been homeless for five years due to a poor rental history, although she has held a job.

“A lot of people have been doing this for so long, for so many years, it’s a cycle for them,” Melissa said about homelessness. “It’s hard to get out.”

St. Olaf parishioners have been engaged with outreach to the homeless beyond Super Bowl weekend. The parish has a Samaritan ministry that provides hospitality to the homeless, and the parish hosts Adult Shelter Connect, a resource program funded by Hennepin County. St. Olaf also owns the Exodus Residence, a transitional home run by Catholic Charities of St. Paul and Minneapolis for people who have recently become homeless.

“That’s one of the main reasons why I like to come to St. Olaf is the very strong commitment to the homeless,” said Margaret Lauer, a parishioner of St. Olaf who volunteered for the Super Bowl party.

NEXT: Cardinal commissions social ministers with tales of pope, martyrs