Rare relic of Auschwitz saint on display at Chicago church 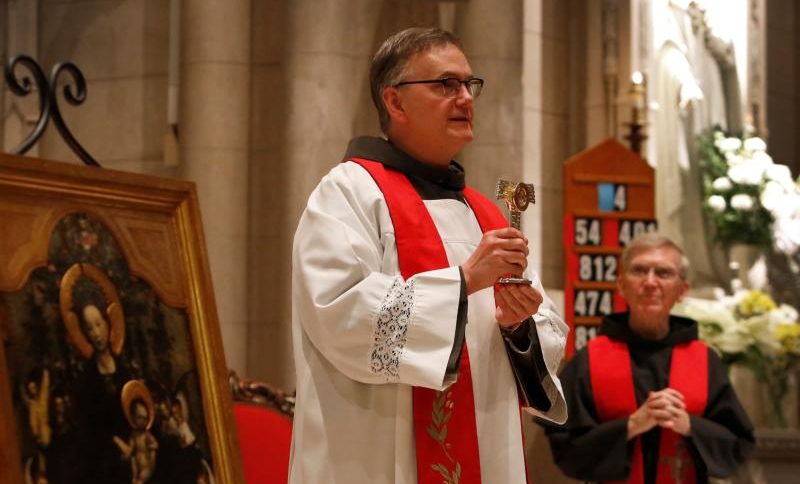 Father Bob Cook, pastor of St. Ita Parish in Chicago, holds a first-class relic of St. Maximilian Kolb as it is installed for permanent display Jan. 24 at the parish church. St. Maximilian Kolbe died in Auschwitz Aug. 14, 1941, after volunteering to take the place of another man who was to be tortured in a room meant to starve people to death. Looking on is Father James McCurry, provincial of Conventual Franciscans’ Our Lady of Angels Province. (CNS photo/Karen Callaway, Chicago Catholic)

St. Maximilian Kolbe died in Auschwitz Aug. 14, 1941, after volunteering to take the place of another man who was to be tortured in a room meant to starve people to death. Like Father Cook, St. Maximilian was a Conventual Franciscan, and Father Cook has met older friars who knew the priest in Poland before he was martyred.

“There’s a closeness there,” Father Cook said before welcoming a first-class relic of St. Maximilian to St. Ita Church Jan. 24. “He’s like my older brother in faith.”

The relic, a bit of hair, is enclosed in a reliquary in the shape of a tau cross — which forms a loose “T” and is a symbol of the Franciscans.

The formal reception of the relic included a rite consecrating the entire parish to Mary, because it’s what St. Maximilian would have wanted, Father Cook said, and a homily from Conventual Franciscan Father James McCurry, provincial of the order’s Our Lady of Angels Province, which covers the eastern United States.

Father McCurry never met St. Maximilian himself, but he was present in St. Peter’s Square for his canonization in 1982. In fact, he led a pilgrimage of 750 American Catholics to the canonization, and, probably by virtue of that, was selected as one of 20 people to participate in the offertory procession.

He also for many years served as a driver and host for Franciszek Gajowniczek, the man whose life was spared when St. Maximilan took his place, when Gajowniczek visited the United States to speak about St. Maximilian.

According to Gajowniczek and other prisoners Father McCurry met, St. Maximilian offered an example of goodness and charity even in the Auschwitz death camp in Poland.

Most of the prisoners in his barracks were Polish Catholics, as the Nazi regime had not yet embarked on its “final solution” — the plan to exterminate European Jews — but they were all welcomed to the camp by the commandant with a statement that the only way out was through the crematorium. Any Jews among them had the right to live no more than two weeks, the commandant said; Catholic priests could live a month.

But St. Maximilian lived and worked with the other men, sharing what food he had, hearing confessions and advising his fellow prisoners to keep hope and love in their hearts, Father McCurry told the Chicago Catholic, the archdiocesan newspaper.

When Gajowniczek was among 10 men chosen to die to set an example after one man escaped, he cried out that he had a wife and children, and asked what would become of them. That’s when St. Maximilian stepped forward and identified himself as a priest, volunteering to take his place, Father McCurry said.

With the other nine, he was stripped of his clothes and locked in an underground bunker without food or water for two weeks. Fellow prisoners said that in the days after they were locked in, the men could be heard singing hymns and praying. When the guards opened the bunker two weeks later, St. Maximilian was the only one still alive. He was killed with an injection of carbolic acid.

That’s the part of St. Maximilian’s life story that many American Catholics know. He was called a “martyr of charity” because he died not to avoid denying his faith, but because he insisted on following the words of Jesus, that there is no greater love than to lay down one’s life for one’s friends, Father McCurry said.

What some might not know is that St. Maximilian led an exceptional life before that. He saw a vision of Mary in his parish church when he was just 10 years old, and she offered him two crowns: the white one would mean heroic, lifelong purity; the red one would mean heroic martyrdom.

“With the enthusiasm of a 10-year-old, he said, ‘I want both,'” Father McCurry said.

St. Maximilian went on to found the Militia Immaculatae — the Knights of the Immaculate — while still a student-friar in Rome in 1917. Five years later, after having been ordained, he started the Knight of the Immaculata magazine in Poland to evangelize, bringing people to Jesus through Mary.

Five years after that, he founded a Franciscan apostolic center near Warsaw called Niepokalanow, the “City of the Immaculata.” The congregation used print media and radio to spread the word that people should love Mary as a mother if they wanted to get closer to Jesus.

Illinois has the National Shrine of St. Maximilian Kolbe, located at Marytown in Libertyville.

Because of his religious prominence, St. Maximilian knew he was likely to be arrested when the Nazis invaded Poland in 1939. To try to avoid capture a little longer, he asked the congregation’s barber to shave off his long, identifiable beard.

Without that decision, there would be no relics today, Father McCurry said, as his body was incinerated with those of other prisoners.

In fact, the barber suspected that his superior might be a future saint, so he tried to tuck the clippings away. When St. Maximilian noticed, he chastised the barber for considering such a thing and instructed the barber to throw the clippings into the stove, father McCurry said.

The barber, knowing it was summer and the stove was cold, obeyed. When St. Maximilian left the room, he removed the clippings from the stove and stored them in a pickle jar.

Now fragments have been given to churches around the world, when they are requested by the pastor and bishop and when they will be displayed for public veneration.

The particular relic now displayed at St. Ita was on the altar at Niepokalanow for Mass on the feast of the Immaculate Conception. A St. Ita parishioner who has family in Poland collected it at the request of Father Cook.

Father McCurry said St. Ita parishioners can look to St. Maximilian as an example of the power of goodness.

“He lived in a troubled world, where there was a battle going on between good and evil,” the priest said. “He chose to be a champion for good in a world where evil seemed to be winning. It looked like the Nazis were winning at Auschwitz. If people need an example, he showed how to never give up. God will always win out. Love is stronger than hate.”