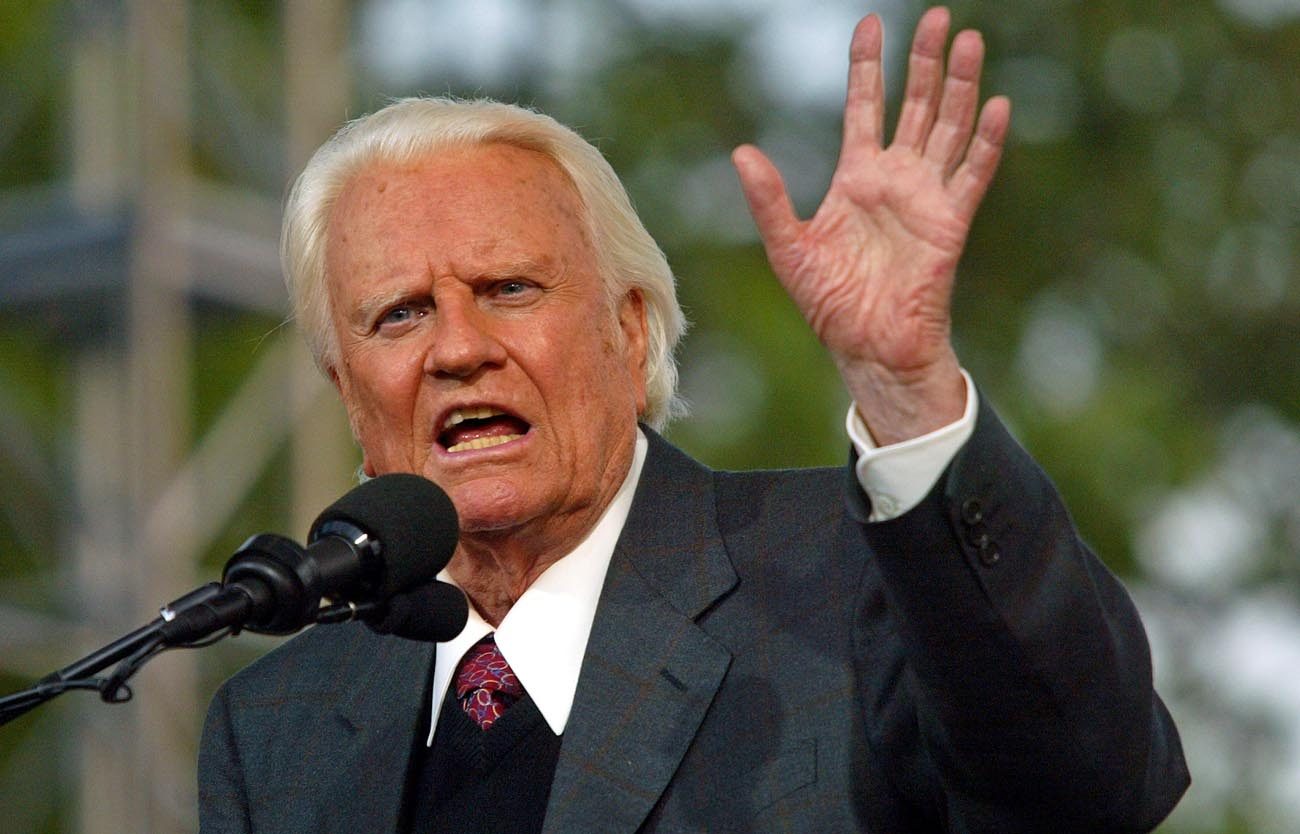 The Rev. Billy Graham, famed preacher who was best known for his televised evangelism broadcasts, died Feb. 21 at his home in North Carolina at age 99. He is pictured in a 2005 photo in New York. (CNS photo/Shannon Stapleton, Reuters)

UPDATED – MONTREAT, N.C. (CNS) — The Rev. Billy Graham, a fiery Baptist preacher who was easily the most famous evangelist of the 20th century and for decades one of the world figures most admired by Americans, died early Feb. 21 at his home in Montreat, according to the Billy Graham Evangelistic Association. He was 99.

He had suffered from Parkinson’s disease for many years, although he continued to lead crusades until 2005, when he held his last one in New York. In recent years, he also suffered from cancer, pneumonia and other ailments.

Rev. Graham will lie in honor the U.S. Capitol Rotunda Feb. 28-March 1. Senate Majority Mitch McConnell, R-Kentucky, and House Speaker Paul Ryan, R-Wisconsin, will receive the casket with his body when it arrives at the Capitol and will take part in a bicameral service. Members of the public will be able to pay their respects. Rev. Graham will be the first private citizen to lie in honor on Capitol Hill since civil rights heroine Rosa Parks in 2005.

His body will be returned to North Carolina for his funeral March 2 at the Billy Graham Library in Charlotte. The service will be private and by invitation only.

During his more than 60 years of ministry, Rev. Graham welcomed representatives of other denominations, including Catholics, to attend his crusades. In many places local Catholic authorities welcomed him and formed pastoral follow-up programs to welcome lapsed Catholics who were prompted by the preacher to return to the church.

In 1964, Cardinal Richard J. Cushing of Boston said that no Catholic who heard Graham preach “can do anything but become a better Catholic.”

At his final crusade, for example, Bishop Nicholas DiMarzio of Brooklyn, in whose diocese the crusade was held, said: “As a fellow Christian, I pray that the Lord will continue to bless him in his ministry to preach the Gospel to all who are willing to listen.”

He noted that Rev. Graham encouraged church members who make commitments during a crusade to return to their own churches, and his evangelization office scheduled listening sessions, revival missions and other forms of pastoral outreach in parishes.

Rev. Graham — who preferred to be called Mr. Graham — was sometimes regarded as a pastor to presidents because he was known as a spiritual adviser to 13 U.S. presidents, from Harry S. Truman to Donald Trump. He delivered the invocation at eight presidential inaugurations.

He was best known in the United States and worldwide, however, for his crusades — revival meetings, often held in large stadiums — that took him to more than 185 countries to preach the message of Jesus Christ and invite people to accept Jesus as their Lord and Savior. In 1957, he filled New York’s Madison Square Garden for 16 consecutive weeks.

He preached the Gospel in person to more people than any other evangelist in history — he reached at least 210 million through his personal appearances and through his radio and television ministries. In 1950, he launched his weekly “Hour of Decision” radio program that became a staple of Christian broadcasting for 60 years.

He reached many more through his films, more than two dozen books, an internationally syndicated newspaper column, “My Answer,” and a monthly magazine, Decision, which comes out in six languages and has more than 2 million subscribers.

His 1975 book, “Angels: God’s Secret Agents,” sold more than a million copies in three months. He wrote more than 30 books, starting in 1947 with “Calling Youth to Christ” and ending in 2015 with “Where I Am: Heaven, Eternity and Our Life Beyond.” 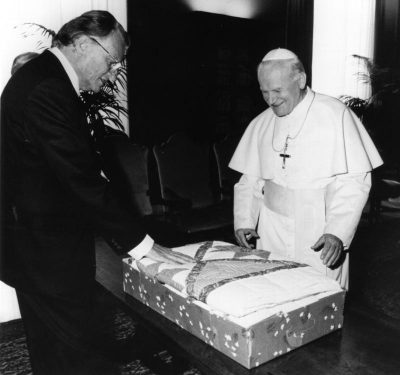 The Rev. Billy Graham and St. John Paul II are seen at the Vatican in 1990. Graham, best known for his televised evangelism broadcasts, died Feb. 21 at his home in North Carolina at age 99. (CNS files)

When he first met with St. John Paul II in 1981, it was a meeting that had been delayed three years. In 1978, Rev. Graham, on a crusade in Poland, preached at the Catholic cathedral in Krakow and was to have dined with Krakow’s Cardinal Karol Wojtyla. But the cardinal had been called out of town on short notice for important business in Rome — attending the conclave at which he was elected pope.

In an interview with Catholic News Service after a meeting with St. John Paul in 1990, Rev. Graham said being known as an evangelical is misunderstood in some parts of the world.

“Some think in terms of extreme fundamentalism,” he said. “But an evangelical is a person who believes in the authority of the Bible, the atonement of Christ on the cross for our sins, of course the virgin birth of Christ, the Resurrection and the need to respond to the good news of the Gospel by repentance and faith.”

He praised the pope for his Bible-based vision and message and said the pontiff’s homily at the inauguration of his ministry “was a straight evangelistic address.”

“Of course Protestants cannot accept everything (the Catholic Church teaches), but they’re beginning to find out that we have a great deal in common, and perhaps far more in common than we have differences,” he said.

Rev. Graham made common cause with popes later in his life on matters of morality, but in August 1960, he played a role — though behind the scenes — in the efforts of a group of Protestant ministers, most of them Baptists, to oppose on religious grounds the election of the Catholic Democratic nominee, John F. Kennedy. The ministers made the decision because, as one of them said: “I fear Catholicism more than I fear Communism.”

Reports about how involved Rev. Graham was in this effort are mixed. An associate evangelist of his stated that the preacher had rejected a request from Kennedy that he sign a pledge not to make religion an issue in the campaign. Some accounts say that while he refused to issue such a pledge, he would not come out “publicly” against a Catholic candidate as some Protestants leaders urged him to do. After the election, Rev. Graham and Kennedy were cordial to each other.

He was a friend of the Rev. Martin Luther King Jr., held integrated rallies beginning in 1953 and was considered a major influence in the civil rights movement. Rev. Graham appeared on the Gallup list of world’s most admired men 60 times in his life — every single year the polling company asked the question.

He founded the Billy Graham Evangelistic Association in Minneapolis in 1950 after a photo in what is now The Atlanta-Journal Constitution daily newspaper showed an usher counting a $16,000 “love offering” from a crusade in Atlanta.

Ashamed at the insinuation that he was making a fortune through his ministry, he formed the association and made it the recipient of crusade offerings as well as all his speaker’s fees and book royalties. In 2003, the association was moved to North Carolina to be based in Charlotte, Rev. Graham’s hometown.

He received from the association the salary of a community pastor. Today the association, run by his son, William Franklin Graham III, has about $300 million in assets and a yearly budget of more than $100 million. The younger Graham has stirred controversy for the ministry with his criticism of Islam in recent years. Rev. Graham’s grandson Will also preaches, and he saw Will preach via a television feed during an August 2012 hospital stay for bronchitis.

With his reputation for integrity and simplicity of life, the sex and money scandals that rocked the ministries of the Rev. Jim Bakker and the Rev. Jimmy Swaggart in the 1980s had no effect on Rev. Graham’s organization or ministries.

William Franklin Graham Jr. was born in Charlotte Nov. 7, 1918, and raised on a dairy farm in a strict Presbyterian family. At age 16 he attended a revival meeting led by the Rev. Mordecai Fowler Ham. It led him to commit himself to Christ.

Another conversion experience in college led him to commit his life to preaching the Gospel.

He was ordained a Southern Baptist minister in 1939, graduated from Wheaton College in Illinois in 1943. After two years as a pastor in a Chicago suburb, he began working as a traveling tent evangelist.

From 1945 to 1948, he was first vice president of Youth for Christ International, and from 1947 to 1952, he was president of Northwestern College in Minneapolis, dividing his time between those duties and preaching at revivals.

He formed a lasting partnership with singer George Beverly Shea and song leader Cliff Barrows to lead the revival meetings, which he came to describe as crusades. They came to national attention in 1949, when a meeting in Los Angeles, expected to draw about 3,000 people, attracted 10,000.

Among the many awards Rev. Graham received over the years were numerous honorary doctorates and a wide range of religious, humanitarian and broadcasting honors. They included the prestigious Templeton Foundation Prize for Progress in Religion, the Presidential Medal of Freedom and the Congressional Gold Medal, one of the nation’s highest civilian honors.

The Billy Graham Library was dedicated in Charlotte May 30, 2007, just two weeks before the death of Ruth Graham, his wife of 64 years. Rev. Graham was to be buried alongside her on the library grounds.

He is survived by two sons and three daughters, 19 grandchildren and 41 great-grandchildren.

NEXT: Rev. Graham recalled for deep faith, his invitation to all to know Christ